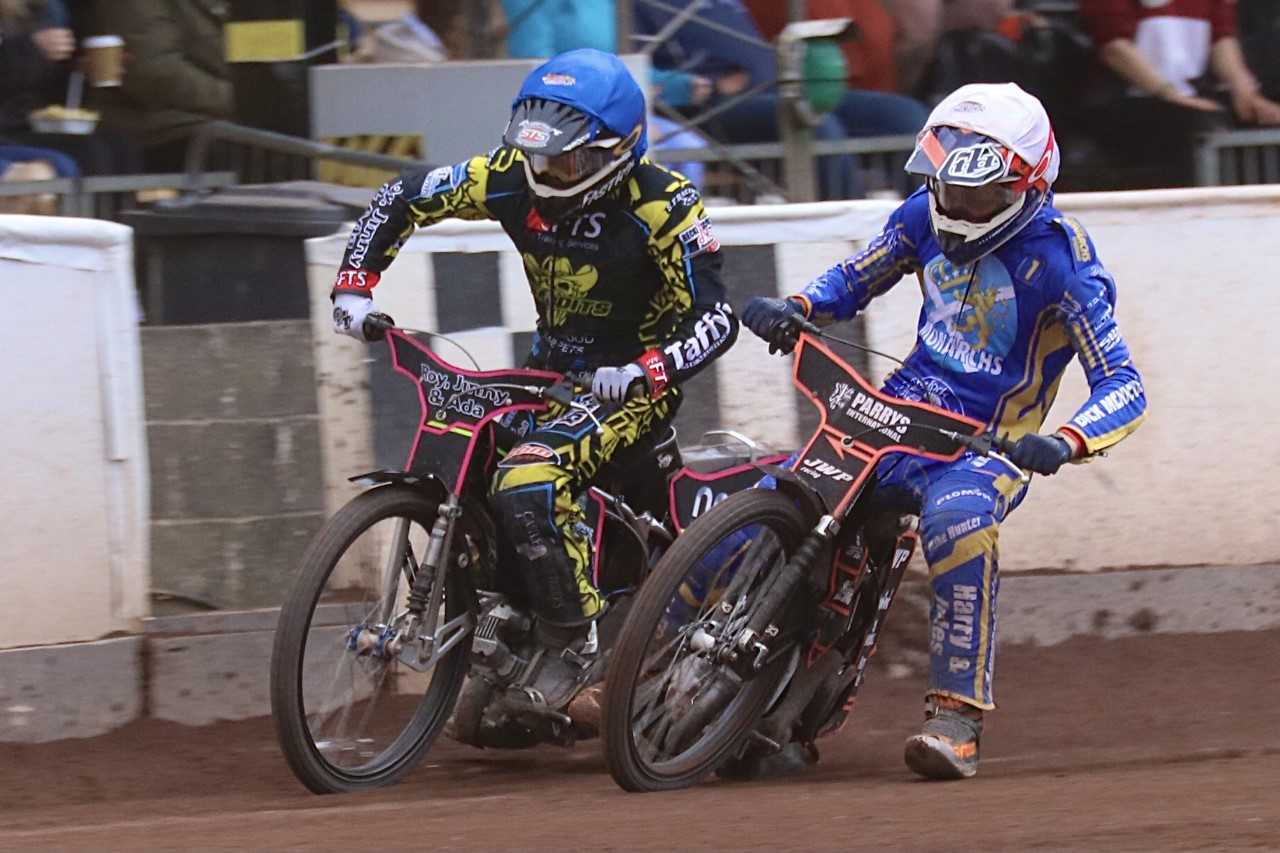 Sam Masters was unstoppable, adding a paid maximum to a series of big scores around the Shielfield bowl, while fellow Australian Josh Pickering backed his captain with 15 points.

Between them the Edinburgh Monarchs pair won eight of the heats in their 46-44 win at Berwick Bandits in the SGB Championship Jubilee Cup but, crucially, in the final analysis teamed up for two 5-1s and a 4-2 in the last five to turn the match on its head.

Up until then Berwick’s more solid team performance looked capable of overcoming the visiting side. Nathan Stoneman recorded a popular first win in Bandits colours in heat two.

Bandits, sponsored bt FTS and powered by Keenwood Karpets, were happy to fill the minor places and keep the scores level until Jonas Knudsen and home-hero Leon Flint blew the meeting wide open. Flint, the newly-crowned British under-19 champion and the Danish newcomer kept guest Kasper Andersen at bay for a 5-1.

Former What the Fork Edinburgh Monarchs skipper Theo Pijper and Stoneman looked on track to repeat the feat in heat eight only for former Bandit Lee Complin to roll back the clock with a neat pass.

Berwick extended their lead to ten points when guest Charles Wright and Pijper proved too strong for Andersen and Kye Thomson.

Edinburgh opted to use Pickering as a tactical substitute alongside Masters in heat 11 and there was nothing either Knudsen or Flint could do to pass the pairing.

A re-run heat 12 saw Thomson shoot from the start and James Sarjeant got the better of Stoneman for third place.

Flint continues to gather impressive scalps home and away and he was electric from the traps in 13, holding Edinburgh’s big guns at bay for three sensational laps until Masters found the drive to pass him down the home straight going into the final lap.

Knudsen was an impressive winner of the penultimate heat but the problem for the home side was that former Edinburgh racer Ricky Wells failed to force his way past Sarjeant which meant that the visitors shared the points and went into the last heat decider just two points adrift.

Their pairing was a foregone conclusion. Masters was, well masterful, but Wright briefly had the home fans on their feet as he roared past Pickering on the back straight but couldn’t make it stick.

The Redcar Bears racer rode the fence but couldn’t find a way past the Aussie a second time, Monarchs delighting their travelling fans by securing the 5-1 which gave them victory.

Bandits team manager, Gary Flint, said: “While you could pick out individual moments – such as Nathan’s heat two ride, Leon leading Sam Masters for three laps, another good display from Jonas – in the end it’s another disappointing home result.

“Edinburgh rely heavily on their top two and they delivered big style, especially in the key heats. We have to take it on the chin and come out swinging again at Leicester and then against Glasgow.”