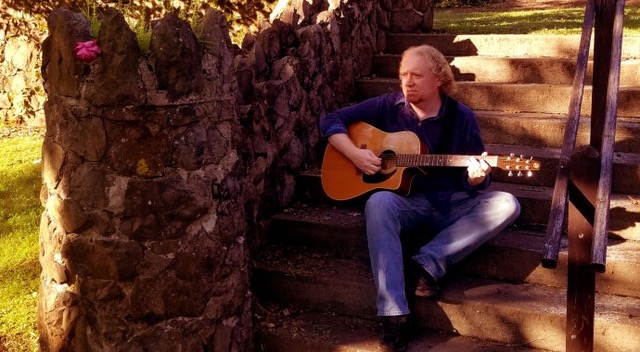 Four acclaimed songwriters, two from Scotland (Annie Booth and Sean McLaughlin) and two from the United States (Dan Sheehan and Andy Krikun) get together this Friday to present the show 3300 Miles – New Jersey to Edinburgh: A TransAtlantic Songwriter’s Circle as part of the Fringe on 17 August 2019 at Lauriston Halls.

Edinburgh-based Booth’s debut album An Unforgiving Light was lauded as Roddy Hart’s “Record of Note” on BBC Radio Scotland and featured in Vic Galloway’s Best Albums of 2017.  In 2018 Booth performed at the BBC’s Quay Sessions, and appeared at festivals including XpoNorth, Celtic Connections, Tenement Trail and Kelburn’s Garden Party (The Skinny Stage).

Her 2019 EP Spectral features production from Chris McCrory (Catholic Action, Siobhan Wilson), resulting in an understated yet moving collection of melancholic tracks, being championed by the likes of Roddy Hart, Nicola Meighan and Janice Forsyth, and receiving praise from the Scottish Alternative Music Awards, The Skinny and The List.

With his indie rock band Dante on hiatus, Sean McLaughlin has kept himself busy with a new folksy project, The Wind-Up Crows. With releases coming later in the year, listeners should expect quite a departure from Dante’s last record, I Wear Your Weight with Mine (2018).  Having worked regularly with Idlewild’s Rod Jones, and Frightened Rabbit’s Andy Monaghan, McLaughlin shows a care and attention to songwriting that has won support and critical acclaim from the likes of Clash, Artrocker Magazine, BBC 6 Music, The National, BBC Radio Scotland, BBC Rapal, The Sun, The Scotsman and The Herald.

Dan Sheehan joins as part of his solo tour of the U.K., Ireland and Spain.  Sheehan has garnered airplay around the world for his albums The Dan Sheehan Conspiracy and the follow-up Are You Conspirienced?, earning two awards from the American Society of Composers, Authors and Publishers.

His current project, Tales from Earth Incorporated is a concept album and live extravaganza about greed vs. environmental and economic justice.  Sheehan has recorded or performed with members of Morrissey, Yes, the Doors, and Pearl Jam and opened for Kila, the Meat Puppets and Courtney Love.

New Jersey native Andy Krikun’s career began in Los Angeles with “one of the great lost, eclectic underground rock & roll bands in the early 80s,” (L.A. Weekly)  Their single “Patience” was recorded for Elton John’s Rocket Records and televised on the USA Network’s New Wave Theatre.  “Third World Wives”was included on the anthology, The D.I.Y. Album: Ten of America’s Best New Bands, along with Black Flag, Red Rockers, and Dreamers.  Andy is currently completing a new album with the band’s original 1981 lineup with all new material, scheduled for release in 2020.

3300 Miles puts the four musicians in a casual, intimate setting, performing stripped down renditions of their songs and telling the stories behind them, offering attendees a perspective on songwriting artistry in the present times.

Tickets are available at the Edinburgh Fringe box office and through EventBrite.