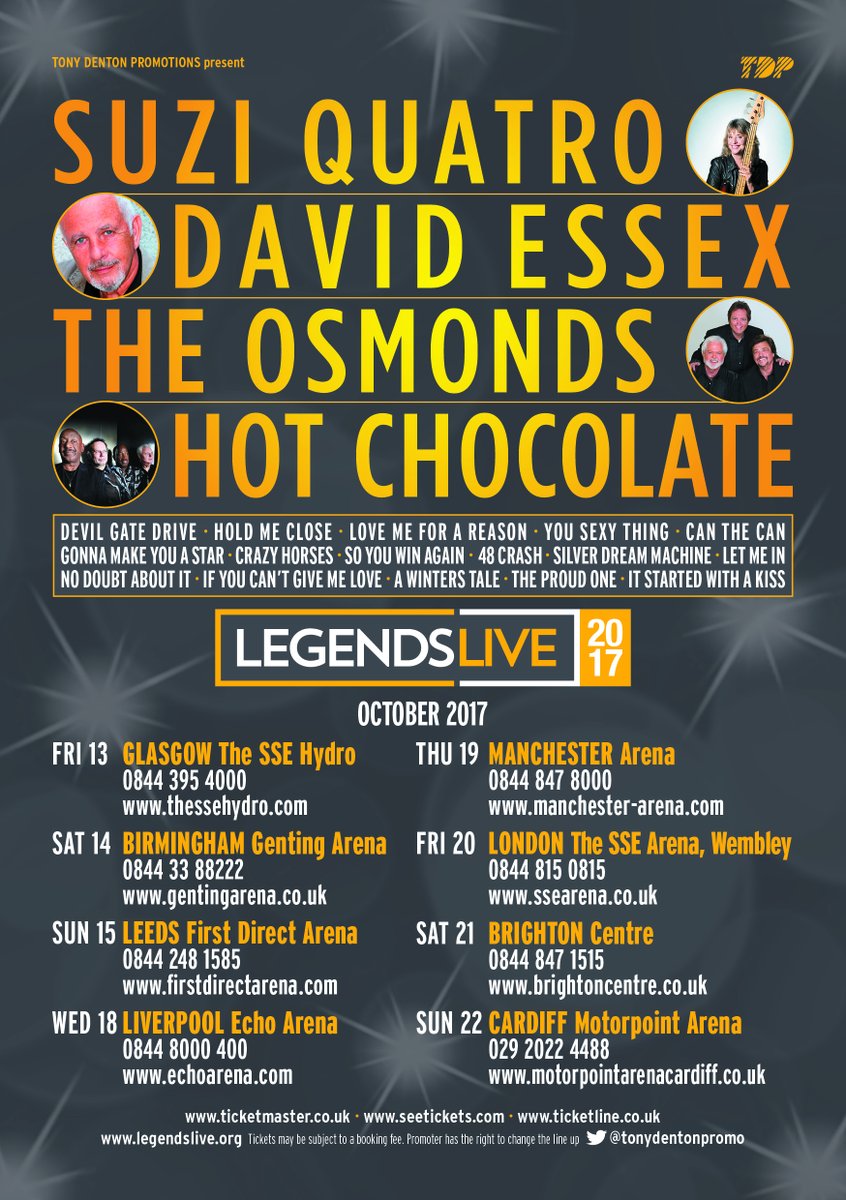 This tour will be kicking off at Glasgow’s SSE Hydro on Friday 13th October 2017 and culminates at Cardiff’s Motorpoint Arena on Sunday 22nd October. Sadly no Edinburgh dates.

Between 1973 and 1980, Suzi Quatro featured in the British charts for no less than 101 weeks, and has sold to date over 55 million records, and still counting. Her hits include the No 1 “Can The Can”, that went on to sell two and a half million copies worldwide. Other hits include “48 Crash”, “Too Big”, “Devil Gate Drive”, “Daytona Demon”, “The Wild One”, “She’s In Love With You”, “If You Can’t Give Me Love”, and a million seller in the U.S.A., “Stumblin In” a duet with Chris Norman. From 77-79 Suzi spread her wings and landed a part on the worldwide hit TV Series ‘Happy Days’, playing leather tuscadero opposite Henry Winkler and Ron Howard. She continued to act in other shows including, Minder, Dempsey and Makepeace, and more up to date, Absolutely Fabulous and Midsomer Murders. She has an on going career with Radio Two having done her own weekly programs, and many special documentaries including Elvis Presley, Otis Redding, Janis Joplin, Jim Morrison and Patsy Cline.
From hit records to hit musicals David Essex OBE has had one of the most enduring careers in music, stage & screen. He scored two number 1 singles with “Hold Me Close” & “Gonna Make You A Star” and a string of hits including “Lamplight”, “Silver Dream Machine”, “A Winter’s Tale”, “Stardust”, “Rock On”, “Oh What A Circus”, “Tahiti” & “Rolling Stone”. He has starred in the films Silver Dream Racer, That’ll Be The Day & Stardust” and appeared in Eastenders as Eddie Moon.
For over five decade The Osmonds have been entertaining sold out crowds but it was in the 70’s they escaladed to one of the biggest bands in the world. Osmondsmania took hold and the hits kept coming, “Down By The Lazy River” was their first UK hit followed by “Crazy Horses”, “Let Me In”, “Going Home”, “The Proud One”, “One Bad Apple” & the monster number 1 “Love Me For A Reason”. The have recorded over 50 albums and sold over 100 million records, 59 of those reaching gold and platinum status.
In 1970 Hot Chocolate had their first hit with “Love Is Life” which reached number 6 in the charts, this was the first of many that continued until the late 90’s. In all they achieved 27 top 30 hits, including the number 1 “So You Win Again”. The band became the only group, and one of just three acts that scored a hit in every year of the 70’s in the charts (the other two being Elvis Presley and Diana Ross). “You Sexy Thing” became the only track to reach the top 10 in 1970s, 1980s & 1990s and was used in the soundtrack to The Full Monty. A few of their biggest hits include “No Doubt About It”, “It Started With A Kiss”, “Girl Crazy”, “Brother Louise”, “Everyone’s A Winner”, “Emma” & “Put Your Love In Me”.
CLICK below for ticket details