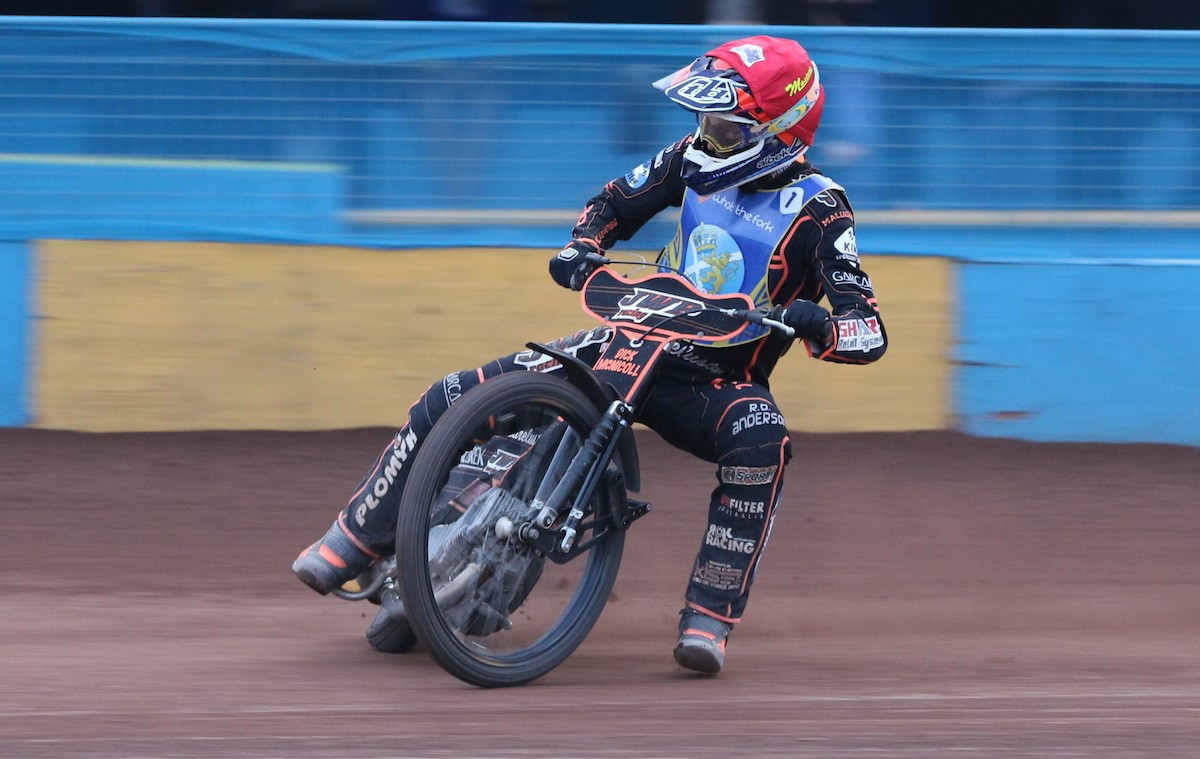 The Championship Jubilee match got off to the worst possible start with three riders ruled out after a first bend heat 1 crash, two of them Edinburgh riders.

What The Fork Monarchs gritted their teeth to emerge from a tight encounter to pull clear with two closing 5-1s for a 50-40 victory over Glasgow Tigers which keeps the Armadale side at the top of the mini-league.

Monarchs’ team manager Alex Harkess admitted: “It was a disastrous start for both teams, the last thing anyone wanted, but I was very pleased with the way our guys pulled together, all five of them did well really. Paco Castagna is full of confidence now and the reserves came up with important points.”

That heat 1 crash resulted in Monarchs’ duo Sam Masters (pictured) and Lasse Fredriksen plus Craig Cook all withdrawing from the meeting. Masters has a shoulder injury, Fredriksen hand, and Cook hip, hand and thumbs.

There was a 45 minute delay before the rerun but riders on both sides produced a wholehearted contest that was extremely tight with Monarchs just a hairsbreadth ahead for most of the night.

Monarchs hung on to a 2-point lead as Pickering won heat 13, then clinched the victory when Castagna and Sarjeant took a maximum win from heat 14. The final heat was a controversial one but brought another 5-1 for the home side, meaning Glasgow finished pointless. They can still turn that round though if they win their matches over the weekend, and they will of course have their two talented under-21 stars back.

All things considered it was quite an enthralling contest, and from the home side’s point of view they can be happy with the 11 race wins they took, at least one for each rider. Paco Castagna had his best meeting yet with some excellent inside overtaking, and matched the 15+1 return of Josh Pickering.

Kye Thomson came good after a slow start and won his final two heats. Reserves Hook and Sarjeant could never be ruled out and scored important points.

Glasgow’s riders often packed the minor placings with Ostergaard their highest scorer on 13+1. The Dane though did earn the disapproval of the home crowd firstly for slamming the door shut on Thomson on the back straight of heat 9, then for an aggressive move in the final race. He thought he had seen a gap to pass Paco Castagna but went in much too hard and brought the Italian down. The referee had his exclusion light on quickly.

Sam Masters sent a message to the other riders on social media congratulating them on their performance. The Monarch of the Match award went to all five of the riders who completed the match. 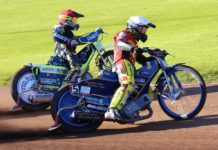