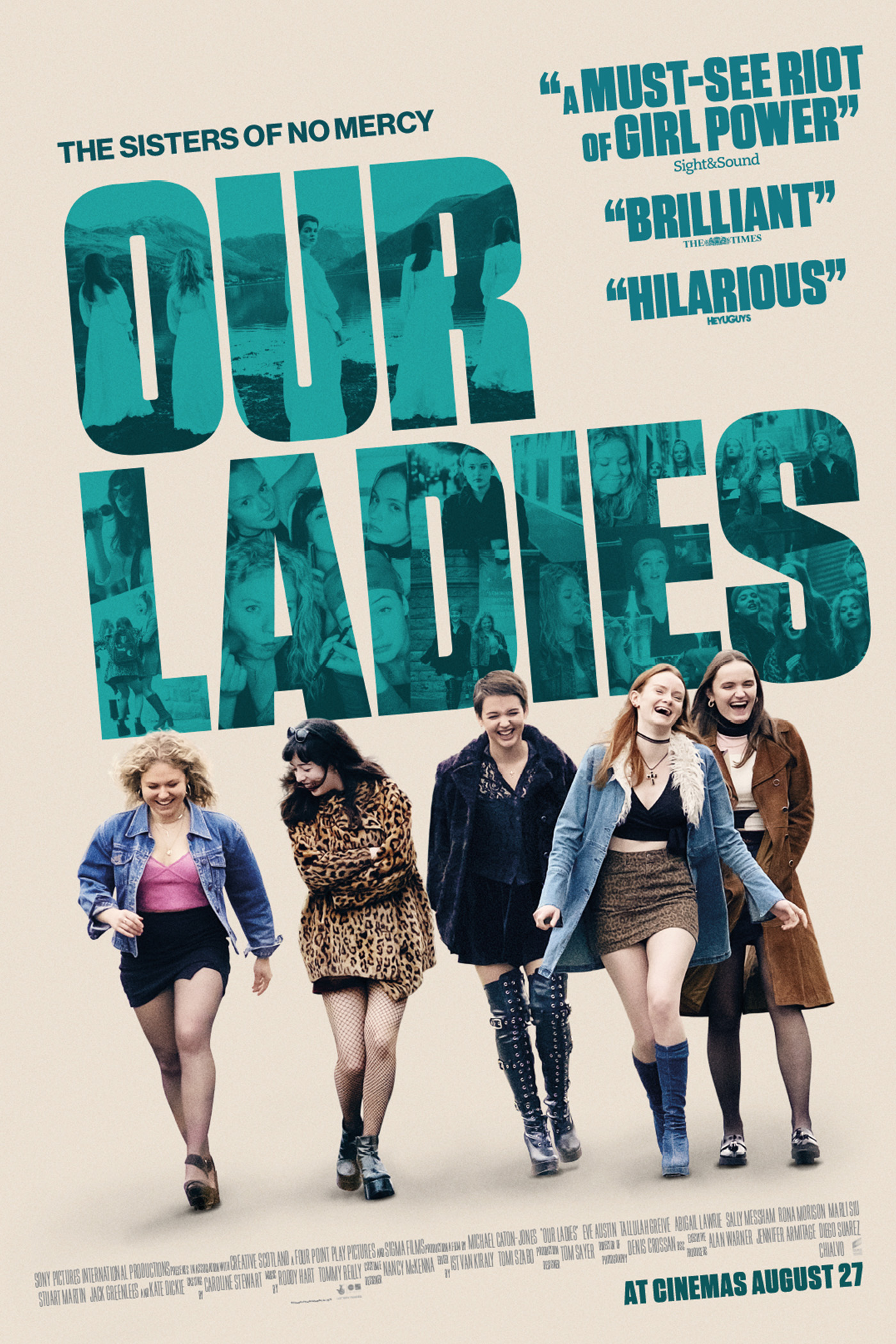 Hilarious and heart-breaking, five girls from Fort William take Edinburgh by storm and return more in tune with themselves than the singing competition they went there for in the first place.

Set 25 years ago, our ladies stand at the banks of the river, shoulder to shoulder in white dresses, facing away from us towards the Scottish Highlands to create a scene purity, serenity and innocence. But that’s boring. And our ladies know it, being far more interested in creating scenes of a sexual nature in rebellion of their repressed surroundings.

With the Statue of the Virgin Mary guarding the entrance to Our Lady of Perpetual Succour High School, Fort William, no wonder the spice lassies’ excitement for a forthcoming trip to Edinburgh (for a singing competition, but who cares about that anyway) is palpable.

We follow Orla (Tallulah Greive), Finnoula (Abigail Lawrie), Kayla (Marli Siu), Manda (Sally Messham) and Chell (Rona Morison) as well as Kay (Eve Austin) on a rollercoaster ride of self-discovery and acceptance as much as breaking bad habits and making new ones. Greive is wonderful as Orla, a cancer survivor who wants to shake off the pity or sacredness others place on her for a life less burdensome. She is the emotional centre but to say she has the leading role would be a disservice to the core five part ensemble. She isn’t the leader of the pack (nor is anyone else) but she does come first among equals.

Finnoula, the mother hen, and Manda, the free spirit, best friends since childhood, have their strongest of bonds tested by the adventure of city life, opportunities of adulthood and divergence in identity, events that were bound to come sooner or later with this trip proving to be the catalyst for change. Kayla, the singer, wants to break free of the band (whose new name she hates with a passion) and go solo while Chell, the lost child, is trying to find her way after the loss of her father.

All of them hold a grudge against Kay, the posh one, for her wealthy, well-connected life now and probably forever, except this is only a perception due to the secret she is keeping, as Finnoula, despite her initial hostility as the most protective, comes to realise after making the time and effort to get to know her properly. While there will always be five, a sixth member of the pack becomes a welcome addition.

With a smart screenplay by Alan Sharp and Michael Caton-Jones (whom also directs), ‘Our Ladies’ juggles multiple narratives across three acts, home and away and home again, with each gathering more depth as they progress while maintaining a high gag rate. Happily, the story doesn’t finish with their time in Auld Reekie. It enters its most bittersweet act due to what our heroines take with them as they return home to their ‘real’ lives having been able to escape its cloisteredness for even just a short while.

Adapted from the 1998 novel ‘The Sopranos’ by Alan Warner, ‘Our Ladies’ does for the girls’ coming-of-age what the 2020 black comedy ‘Get Duked’ did for the boys’; through the prism of a unique experience of The Duke of Edinburgh’s Award expedition whose originality alone demands a standing ovation. As does this.

Coincidentally, both films feature Dickie (again, only too briefly) as the straight (wo)man in a position of authority whose characters deserve greater development and freedom from their two dimensions. From the point of view of the young, however, she will barely register in their mind’s eye as a person worth caring about. And yet, despite this, Dickie makes us care.

If her haunting glare and ominous put downs in her never-ending quest for discipline are anything to go by, her Sister Condron (or condom, courtesy of our ladies, both funny on its own and symbolic of her restrictiveness) may have as much anger inside of her as The Nun from The Conjuring Universe. She worships at the altar of law and order and our ladies are her criminals that must be cleansed of impure thoughts. Spin off!

From the Gaelic Psalms of the sweeping, swirling mountain vistas to the gritty rock and smoke filled halls, clubs and flats, teenage angst, riots and free loving and never far away. Gloriously unheavenly and joyfully unfiltered, ‘Our Ladies’ is as much a tender and romantic comedy as an abrasive and scandalous one. Nobody should be having this much fun on Staurts Coaches.

While the sun is shining on our ladies in the prime of their youth, however brief, they’re loving every minute. And so are we.

“Forgive me Lord for being a lying wee cow.”

‘Our Ladies’ is in cinemas now.