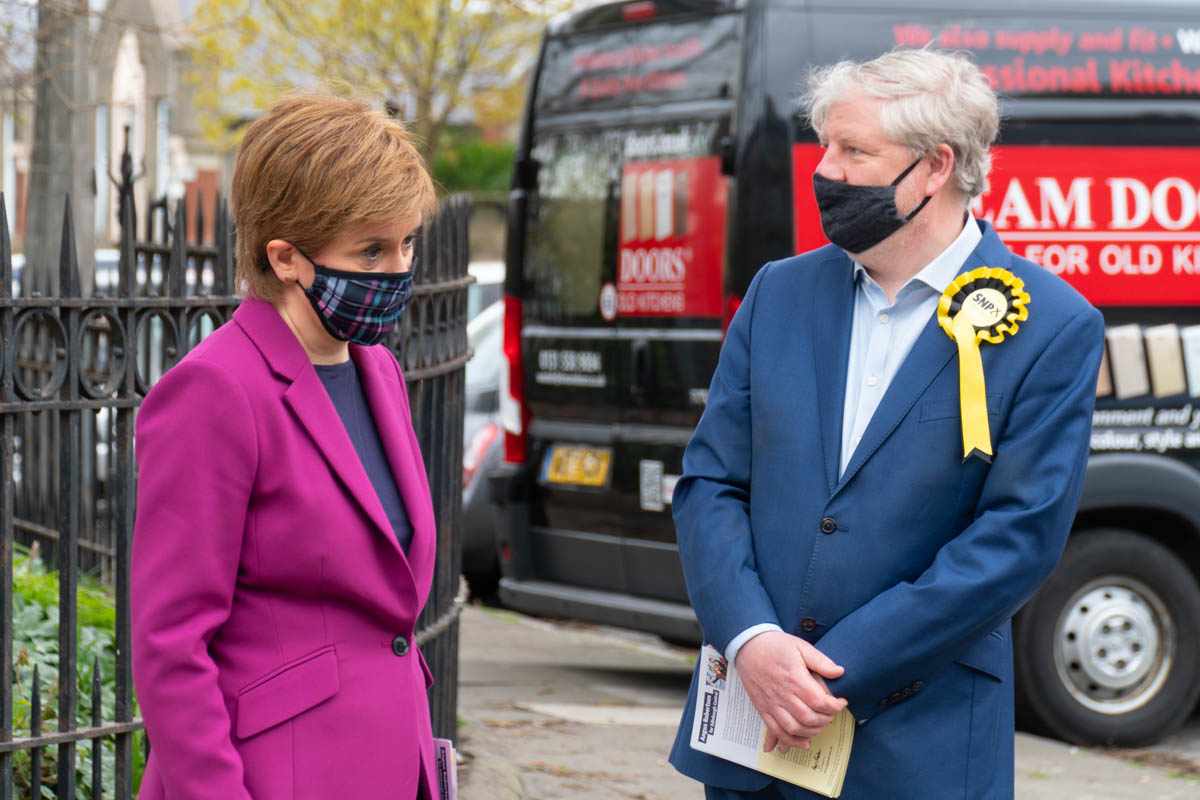 The First Minister, Nicola Sturgeon, was on the campaign trail for a little while this afternoon in the New Town, supporting the Edinburgh Central candidate, Angus Robertson.

Armed with another face mask to add to her no doubt already large collection, which came from a Broughton Street shop, she helped Robertson and his volunteers deliver some leaflets through the doors on East London Street. This seat was held by Conservative, Ruth Davidson, at the 2016 election on a small majority of 610 votes. That led to some Conservative MSPs being voted in on the Lothian list, while no SNP list MSPs were elected.

The SNP leader’s message today is all about students and the support which the SNP promise to them, including financial support such as free tuition, from which she herself benefitted, but also putting a student mental health action plan in place.

Ms Sturgeon said that education based on the ability to learn not to pay is a key SNP promise. She said: “At times all of the other parties have cast doubt over that commitment, but the SNP have remained consistent. As long as the SNP is in government no tuition fees in Scotland. We also intend to increase the level of student support over the next few years, at the real Living Wage. It is important to support students during their studies.”

We asked Ms Sturgeon about the value of voting Both Votes SNP. In Edinburgh Central 118,000 votes on the list were cast for the SNP, but no SNP list MSPs were elected as a result of the arithmetic applied to the list votes.

She was unequivocal. She explained that the difference between constituency votes and list votes is key, and that it led to the SNP losing its majority at the 2016 election.

She said: “You cannot be certain when you go into a polling station that your preferred SNP candidate will win the constituency and therefore vote for somebody else with your list vote. If you start to vote for parties other than the SNP with either of your votes what you do is reduce the chances of an SNP government.

“We don’t just need to talk about that theoretically. If you look at 2011 and 2016, in 2011 the SNP won a majority and in 2016 we feel just short. What was the difference between these two elections? In the first where we got the majority there was a very narrow gap between the constituency and our list percentage share of the vote. It was bigger in 2016 and what happened? – we were just short of a majority.

“If you want an SNP government and if you want to re-elect me as First Minister and re-elect the SNP, Both Votes SNP is the only way to put that beyond any doubt. Anything else is taking a chance and at this time in particular, such as serious time to be living through you don’t want to take a chance on who governs the country.”

Finally today is a good day in the coronavirus story. At lunchtime the First Minister had just announced more relaxation of lockdown rules for hospitality, gyms and beauty salons from 26 April.

But she was her normal cautious self advising everyone to take care as the lockdown restrictions are eased.

We asked Angus Robertson about the star effect of having the First Minister join him on the campaign trail, evident for all to see as she was mobbed by schoolchildren just finishing school for the day and asked for selfies. Other people wanted to talk to her about matters which are important to them and in each case if a follow up was needed, details were taken.