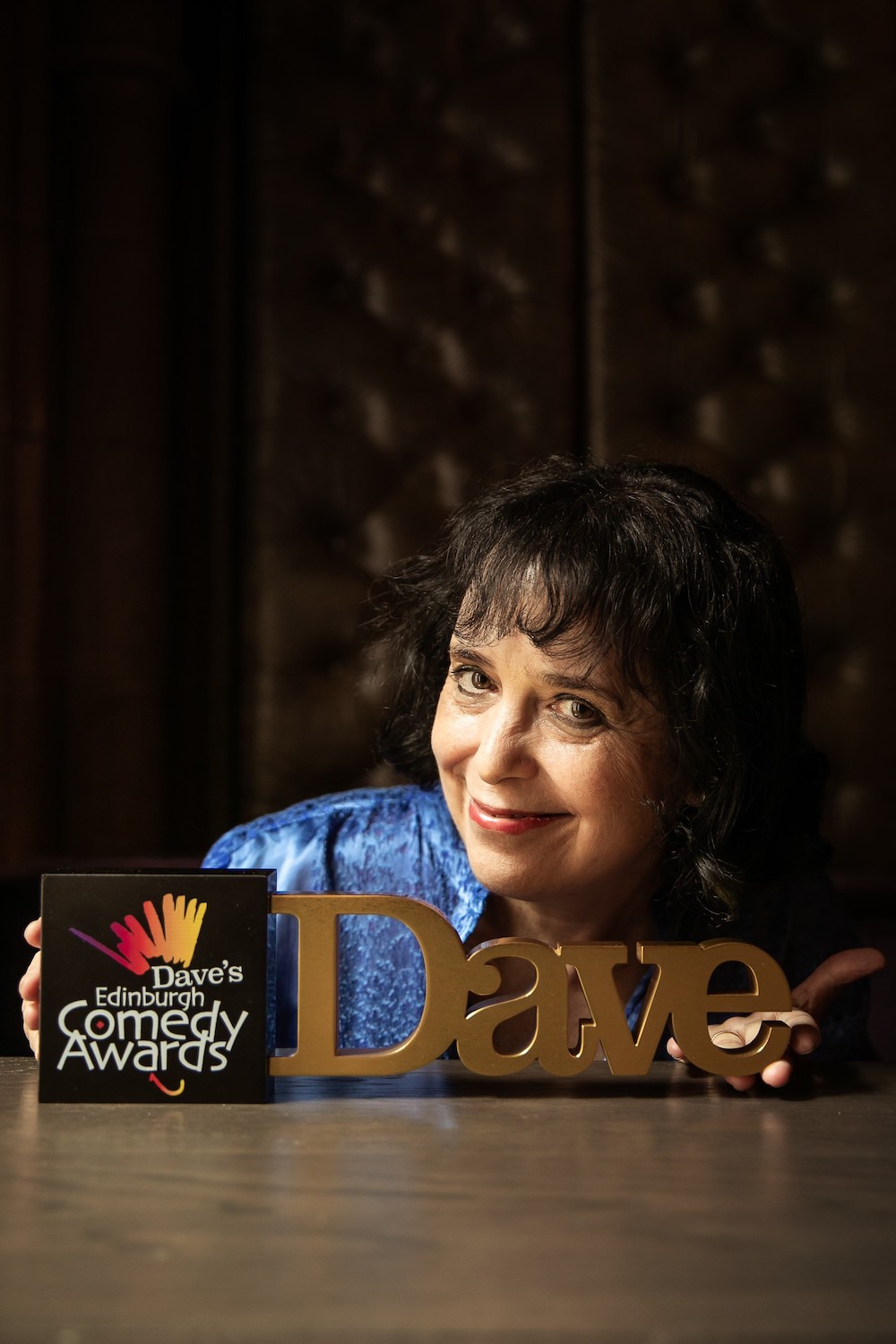 Today the 2019 nominees were announced for Dave’s Edinburgh Comedy Awards, now in its 39th year, for Best Comedy Show and Best Newcomer.

Nica Burns, Director of Dave’s Edinburgh Comedy Awards, says of the 2019 Best Comedy Show shortlist:“An intense 9 hours of debate over 2 days resulted in a wonderfully wide-ranging shortlist of 9. For the first time ever, 2 double acts doing sketches joined by 3 physical comedians and 4 stand-ups”.

This year’s nominees for Best Comedy Show are:

2017 Best Newcomer Nominee Darren considers himself a good person. Now he’s 30 and he’s never been in love. It can’t always be someone else’s fault? Learning more about himself and realising maybe he’s never actually been happy with who is, Darren uses his trademark passion and insightful wit to try to work himself out. The range of topics he addresses is impressive; he speaks about male vulnerability, gangs, influencers, the Mr Men updates, under 16 ravers, the LGBT school protests, climate change, straight pride and love.

Award-winning double act created by Chris Cantrill and Amy Gledhill are back with an all-new sketch comedy nightmare. This time the perennial bad lads of Icklewick are at Ginster’s Paradise, a holiday camp unlike any other. Surreal shenanigans, unsettling illustrations and a staycation adventure you’ll never forget!

Multi-award winning Australian Lardner is an exciting, intense and unpredictable comedian. There’s no telling what she’ll do next in her surreal hour, from unhinged characters, bursts of songs, aggressive physicality or snippets of extreme true-life tales.

Critically acclaimed sketch duo Henry Perryment and Joe Barnes combine hilarious characters, extraordinary physical comedy and an original score. Apparently, at the top of the show, the Goodbear guys are nowhere to be found. Instead Joe and Henry who work at the venue are going to fill in. Joe is nervy and Henry disrespectful of authority but the pair turn out to be surprisingly skilled …

Apologetic Eton and Oxford alumnus Graham was the youngest winner of So You Think You’re Funny in 2009 at the age of 18.  He’s now become a father for the first time so his new show is about how the time for faff is over: has Big Daddy Graham got the skillz (anecdotes/banter/topical asides) to pay da billz (gas/water/electric)? More hilariously anxious blather from one of the most hilariously anxious blatherers in the business.

Absolute powershed and regular host of The Guilty Feminist, Jessica Fostekew explores her big strong strength. Have you ever watched a feminist try and take ‘hench’ as a compliment? It’s like watching a snake eat but funny. In preview, Hench was nominated for Best Show at the Leicester Comedy Festival.

Edinburgh Comedy Award nominee 2017. Chortle Comedian’s Comedian Award winner 2018. No tricks. No gimmicks. No plan. Just an hour in Jordan’s company as you reach the end. Brookes is masterful in his ability to hold the audience’s attention, even without a big reveal. He has a wacky sort of energy; the kind that leaves you wondering what the next thing he’ll say might be.

Raucous and rude London makes her debut at the Pleasance as she explores how as a woman, you can be incredibly awesome and successful yet incredibly single, and how f*ckin’ ridiculous it is! . ‘The new female face of British comedy (Daily Mail). ‘Needs to settle down and find a man’ (London’s mum).

Spencer Jones: The Things We Leave Behind @ Pleasance Courtyard

2017 Edinburgh Comedy Award and double BAFTA-nominated professional idiot Spencer Jones is back with his brand-new show. The Things We Leave Behind is an absurd mash-up of comedy styles, mixing looped music, props, stand-up, turbo clowning and puppets for your eyes, ears and face.

Nica Burns continues: The 2019 Newcomer’s shortlist promises an exciting future for comedy. They make us laugh as they examine the issues that matter to millennials through stand up, songs and sketches.

The nominees for Best Newcomer are:

A buccaneering sketch show from Michael Clarke, Ed Jones and James Gault, three versatile performers who tell a boys-own tale of defeating the Nazis and a Rat King, playing all the characters between them and more. Funny and fun.

A show about living, laughing, loving and losing your debit card five times in one year. Through original songs and stand-up, New York sensation Catherine (with Henry Koperski on keys) explores life as an immortal millennial who is tragically unverified on Twitter.

Helen enjoys a drama. She’s her mother’s daughter, taking a small situation, blowing it up, then getting upset that it’s out of her control. Just like all the best reality TV. At the same time, she dreams of being a sweet angel handling any drama with grace. Who doesn’t overthink everything and plan for how she will have all eyes on her at the right moment. Highly anticipated debut hour from the 2018 BBC New Comedy Award Finalist

Deadpan musical comedian Huge, one the most exciting and unique new acts in the UK, presents his highly anticipated debut show. Dark humour combines with surreal songs, his customised wearable keyboard, and of course, car parks. He also wears a full-size keyboard around his neck for most of the show.

Winner of the 2019 BBC Radio 4 Comedy Award and Laughing Horse New Act of the Year 2018 and 1/3 of award-winning sketch trio Muriel. Janine’s father is a lifelong New Yorker and son of Middle-Eastern immigrants. He’s also an avid Donald Trump supporter. Attempting to reconcile those things makes for one tense Sunday dinner. Janine Harouni’s  debut show is about standing up for what you believe in, even if you have to do it really nicely.

Winner of the best new show title at the Leicester Comedy Festival. Michael Odewale is selfish. And apathetic. The fast-rising star a tries to figure out what matters, and what’s just noise, in this highly anticipated debut show. A fresh new voice known for delivering sharp, slick and beautifully executed stand-up, Odewale is set to take the comedy world by storm.

Nigel Ng takes you on a joyous romp through his life in the UK as a Malaysian immigrant. He tackles topics close to his heart, both big and small, from ‘how to retain one’s cultural identity when in a foreign land?’ to ‘is Wagamama actually Asian?’

Sophie Duker’s debut considers some of the modern classics: identity, privilege, the sexuality spectrum, wokeness, mental health and white saviours. The show is framed around a slave who came from South Africa to London in the 1800s, the Black Venus, and who ended up dead at 26 and displayed in a museum. Sophie Duker is your Venus, she’s your fire, your desire. Or is she? Silly, sexy, savage stand-up from a girl who’s definitely not a goddess.

New for this year, the awards are sponsored by comedy channel Dave, with the aim of further celebrating and supporting comics, from those breaking into the industry to much-loved names.

Luke Hales, channel director for Dave, said: “”The diverse range of fantastic talent nominated today reflects the outstanding depth of comedy that the Edinburgh Fringe has to offer.  This year it has been an immense honour for the channel to become sponsor of the Dave’s Edinburgh Comedy Awards, and these nominees prove why we at Dave have been so excited to get even more involved in supporting upcoming and established comedians at the festival.  Our many congratulations to all those nominated!”

The panel saw over 750 eligible comedy shows to select the nominees.  Chaired by Dominic Maxwell – Theatre and Comedy Critic, The Times, this year’s panel consists of seven professionals and three comedy punters representing the public:

The winners will be announced at a lunchtime ceremony on Saturday 24 August at the Dovecot Studios. The presenters this year are 1981 winner Stephen Fry and 2018 Best Comedy Show winner Rose Matafeo.

A full history of the winners and nominees, eligibility rules and all other details about the Awards can be found at www.comedyawards.co.uk