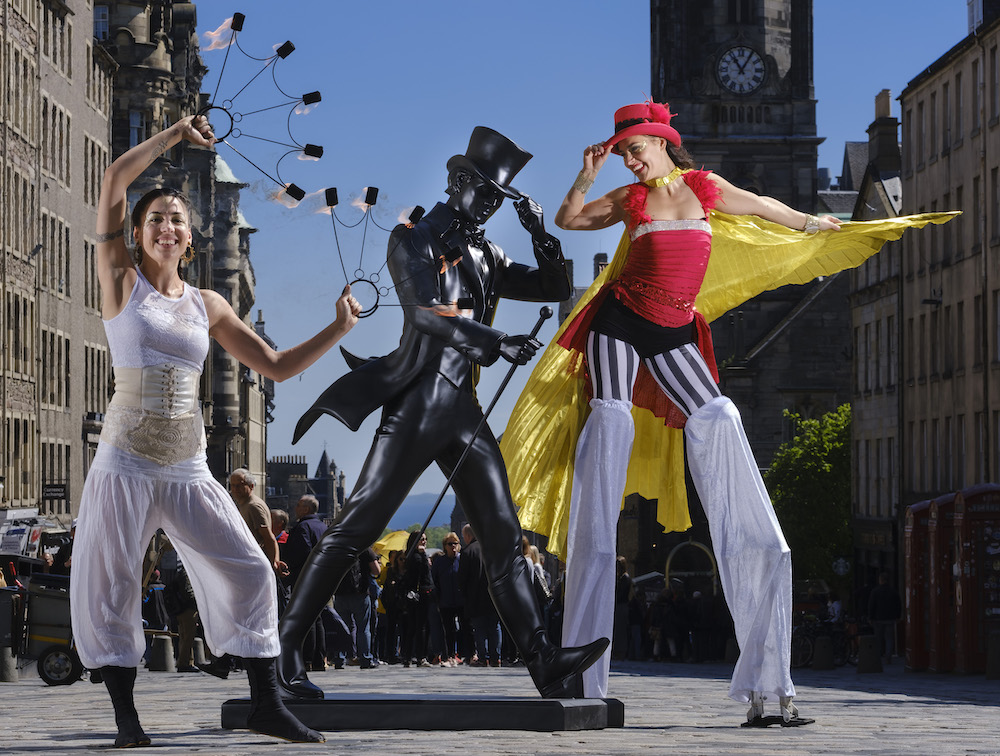 The 2019 Edinburgh Festival Fringe draws to a close today with the Virgin Money Festival Fireworks which begin at 9.00pm.

This year artists, arts industry, media and audiences from over 150 countries have convened in the city, including over 750 shows from Edinburgh. More residents than ever before attended Fringe shows, with a record 856,541 tickets issued to audience members with an EH postcode.

Venues across Edinburgh played host to a diverse selection of work from across Scotland, the UK, mainland Europe and the rest of the world, with showcases from over 15 countries. They were joined by 1,000 of the world’s finest street performers, who brought The Royal Mile and Mound to life as part of the Virgin Money Street Events.

The 2019 programme tackled critical issues such as the climate crisis, Black, Asian and Minority Ethnic identity, mental health and wellbeing, disability and working-class representation, with the best upcoming talent showcased alongside well-known names and the very best of international work.

The Fringe is the largest arts market and platform for professional development in the world.

Over 100 professional development events for Fringe participants were delivered in partnership with 57 external organisations in Fringe Central, our dedicated centre for artists at the heart of the Fringe. The Arts Industry office accredited 1,661 producers, programmers, bookers, talent agencies, festivals and others from 54 countries looking to find work, tour it and support artists beyond the festival itself.

They were joined by over 1,000 of the world’s media, who came to cover the greatest celebration of arts and culture on the planet. Included in their number were Lonely Planet, who named the Fringe the UK’s number one unmissable destination as part of its Ultimate UK Travelist.

To help audiences discover work amongst the over 3,800 shows featured in this year’s programme, the Fringe Society created a new Inspiration Machine, an interactive, arcade-style machine that randomly displayed videos from Fringe artists at the push of a button. Located on The Mound and also available online, the machine was spun more than 100,000 times during August, encouraging audiences to try one more show and potentially discover a new festival favourite.

The Fringe Society has made a long-term commitment to community engagement and access, and this year received the Euan’s Guide Hello Award in recognition of ‘the warm welcome for all visitors’ to the Fringe Shop and Box Office. Key initiatives this year included loaning out 80 sensory backpacks for autistic children and adults, BSL interpretation on The Royal Mile every Saturday of the festival, and a dedicated Changing Places toilet located outside Fringe Central.

The Fringe Society worked with over 30 Edinburgh charities and community groups to distribute £60,000 of Fringe vouchers and Lothian bus tickets, enabling residents from across the city to experience the festival, many for the very first time. In addition, over 1,000 schoolchildren and 188 teachers came to the Fringe as part of their schools’ outreach work.

Shona McCarthy, Chief Executive of the Edinburgh Festival Fringe Society, said:“The Fringe is the perfect combination of local and global – a magnificent medieval city and its residents welcoming performing artists from all over the world. At a time of political division and uncertainty around the world, the role of the Fringe as a platform for radical conversations to happen – from the future of our environment to gender politics, racism and disability – has never been more important.

“We are delighted to welcome audiences from Edinburgh, Scotland, the rest of the UK and across the world to this year’s Fringe, alongside 1,661 producers, programmers and bookers who will help ensure the work presented at this year’s festival is seen by audiences in venues and festivals both here in the UK and internationally.”

Sir Tim O’Shea, Fringe Society Chair, added:“We want everybody in Edinburgh to have the opportunity to attend and enjoy the Fringe, which is why we have been developing and enhancing our work to engage with people in the city who might not have had the chance to attend before. The positive impact of the Fringe is felt long after August comes to a close – from the artists who use the Fringe as a career springboard to the local communities who come to the festival, many for the first time, and are inspired to take up something completely new.”

By this afternoon, with hundreds of performances still to take place, the Fringe Society confirmed that more people than ever attended shows at the Fringe, with just under 250,000 attendees at shows across Scotland’s capital and three million tickets issued. 56% of attendees came from Scotland, highlighting the continued appeal of the Fringe for locals and visitors alike.