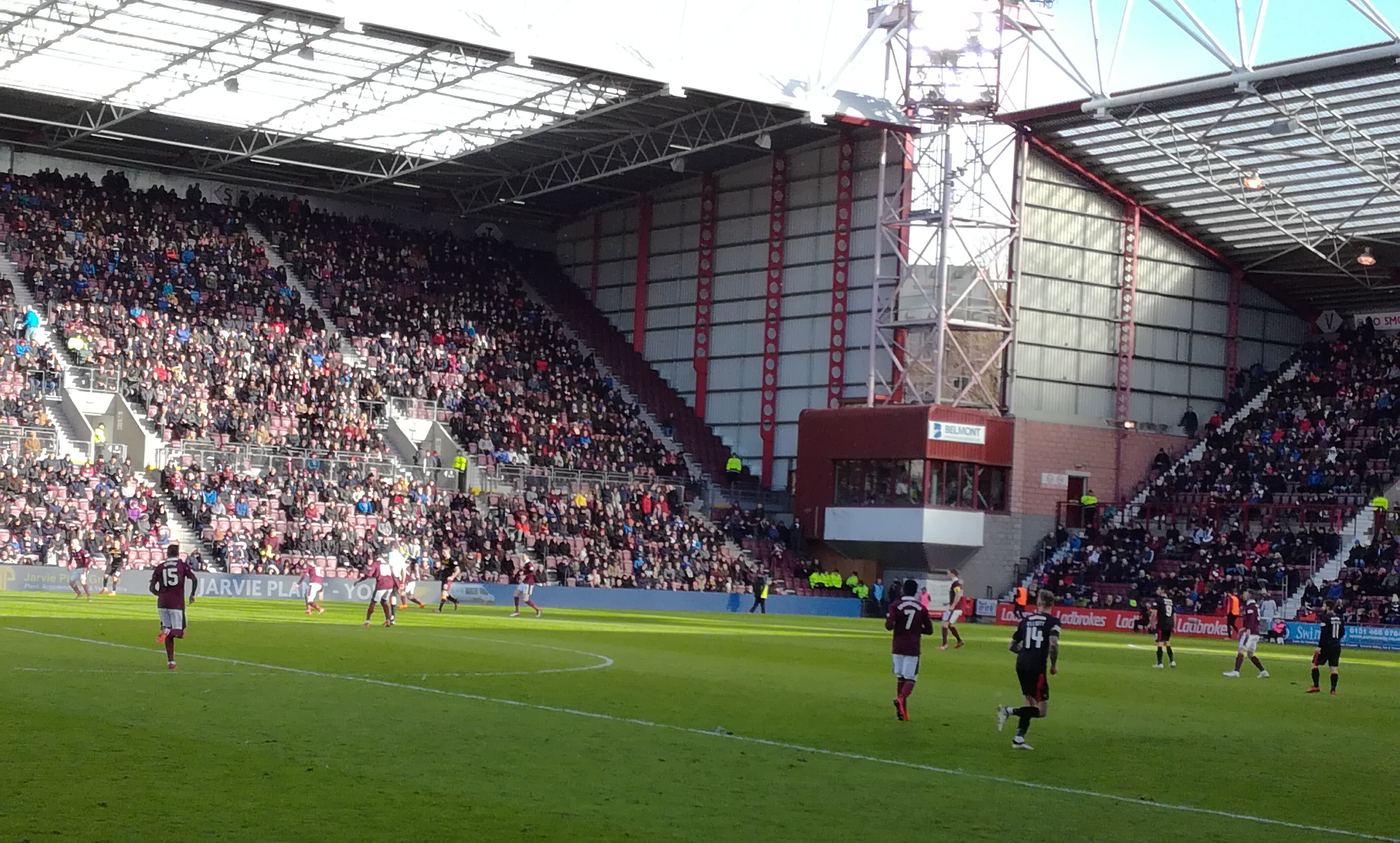 After what has been a difficult couple of weeks – dropped points to Kilmarnock followed by a Scottish Cup exit at Motherwell and another Edinburgh derby loss at Easter Road – Hearts finally returned to winning ways with a convincing win over Partick Thistle at Tynecastle Park on Saturday. A fine first half performance saw the Maroons 3-0 ahead at half-time and while there were no further goals after the break it was a decent performance – and one which was much needed.

Much has been made of Hearts penchant for playing teenagers this season but Head Coach Craig Levein opted for a much more experienced team against Thistle. Thirty somethings Aaron Hughes and Don Cowie returned to the team and there was a starting place for Danny Amankwaa. Connor Randall, Harry Cochrane  – who has made a much quicker recovery from an injury sustained against Hibernian that had been first anticipated – and Lewis Moore were the players who dropped on to the substitutes’ bench as Levein made three changes from the team that went down in Leith last Friday night.

With snow showers falling throughout the day in Gorgie and a biting cold wind which cut through several layers of clothing it was difficult to believe that the clocks go forward next weekend to herald the start of British Summer Time. Hearts, though, warmed their supporters with an impressive start to the game.

In the seventh minute, Steven Naismith, looking like the player we know he can be, was brought down 25 yards out. His former Rangers and Norwich team mate Kyle Lafferty took the free kick but while the Northern Ireland striker’s shot was on target it lacked sufficient power to trouble Thistle keeper Cerny.

Naismith was involved again five minutes later when Berra’s chip into the Thistle penalty box was headed on by Lafferty and Naismith’s header went just wide.

Thistle’s Osman was booked by referee Euan Anderson for a late challenge but then, inexplicably escaped a second yellow card for a foul which looked even worse moments later. It was no surprise to see the defender hooked by his manager at half-time.

In the 17th minute, Hearts deservedly took the lead with a fine goal. Joaquim Adao sped forward and fed Don Cowie. The Scotland international backheeled to his compatriot Naismith who sent a superb pass to Lafferty who ran in on goal before firing past Cerny.

It took the Maroons just four minutes to double their lead. Adao fought like a tiger to win the ball in midfield and raced down the right wing before crossing for Naismith who stroked the ball past Cerny. 2-0 and even with just a quarter of the game gone Hearts looked in command.

Hearts were indeed in full flow at this stage with Thistle struggling to contain the home team. The impressive Danny Amankwaa was tormenting the visitors’ rear-guard and he exchanged passes with Kyle Lafferty before teeing up Don Cowie whose shot was saved by Cerny.

As Hearts earned yet another corner four minutes before the break, I remarked to my grandson Jack I felt Christophe Berra would make it three. From Don Cowie’ s corner, the Scotland defender headed powerfully towards goal but his effort was cleared off the line by Doolan. However, Jack’s assertion that Hearts would get a third goal before half-time proved correct. With a couple of minutes of the first half left, Michael Smith’s throw into the Thistle penalty area caused confusion among the Jags defenders allowing the unlikely figure of John Souttar to hook the ball home for his first goal in a maroon shirt.

Thistle made a couple of substitutions at the beginning of the second half in an attempt to turn the tide but Hearts remained in the ascendency. Don Cowie tried a long-range effort at the start of the second half which flew just over the crossbar.

The pace of the game slackened in the second period with the snow whirling around Tynecastle and the game, to all intents and purposes, won. There was a scare for the home side with 20 minutes to go when Marcus Godinho slipped in the middle of the park allowing Storey to collect the ball and run through on goal. The former Aberdeen striker looked certain to score but Hearts keeper Jon McLaughlin showed why he’s in the Scotland squad for next week’s friendlies with a brilliant save to deny the Thistle man.

McLaughlin denied Storey again minutes later when he saved his header on the goal line.

The game petered out thereafter but Hearts will be happy with a convincing win and, in particular, the performances of Joaquim Adao and Danny Amankwaa. Certainly, Craig Levein was a happy man after. He told BBC Sport Scotland:

“I said before the game that coming back home we would expect to get the three points and we ran out worthy winners in the end.

“We’d been starting fairly slowly in matches and it was important we got off to a quick start today and we did. We scored some good goals, and my biggest worry at half-time was, can we keep it going in the second half? We didn’t quite manage to do that; we had a few opportunities but not as many as the first half.

“You try not to say, ‘Well done’ at half-time because the game’s not finished. But I’ve been there myself as a player when sometimes you think the points are in the bag. I didn’t feel we were in danger at any point but it would’ve been nice to get a few more goals.”

Hearts will feel more confident now of finishing in the top six come the Premiership split and victory in their next game at Dundee on Easter Sunday may go some way to confirming this.

One curious statistic was the official attendance, given as 17,179. If there were more than 17,000 inside Tynecastle on Saturday, I’m a Dutchman…

Top man: A close run thing between Joaquim Adao and Danny Amankwaa but I’m going for the latter.