As you may already have read, this year’s Edinburgh International Film Festival is to feature ‘a strong core of new film, experimental events, thought-provoking ideas and collaborations.’

One such event is Music Pictures, being run by EIFF in association with the Ten Tracks music website.  They have challenged filmmakers to create a music video for one of ten up and coming Scottish acts – by midnight on June 21st.  The winning filmmakers will see their work premiered at the festival while the bands play along live.

A diverse range of acts have signed up: Broken Records, Dead Boy Robotics, FOUND, Kid Canaveral, Iona Marshall, Lipsync for A Lullaby, Mitchell Museum, R.M.Hubbert, Tokamak, and Tinderbox Orchestra.  And it is the bands who will be judging the competition.

“We’ve got lots of entries already,” said Ten Tracks co-founder Ed Stack, “but we want to see more.  This competition is topical for art college graduates about to come into a lot of free time, and it’s also relevant to people who have existing material they could re-work to suit one of the tracks.” Sounds simple, but we asked Glasgow-based artist David Galletly (27), creator of the last Kid Canaveral video, how hard the challenge really is.

“The Kid Canaveral video came about through Johnny Lynch (aka The Pictish Trail) at Fence Records after he’d seen some silly videos I’d put on YouTube. The band gave me free reign and a vague deadline, which is pretty much the perfect brief.

The video is in stop motion.  My fiancé Alex and I put it together using my little HD camcorder’s still frame function to take around 7000 photographs, which I converted into video on my computer. I did most of the actual animating myself while Alex worked the camera. Without her help, I’d still be there now.

Before we began, I quickly scribbled out a storyboard to make sure a few key points in the narrative matched up with different parts of the song. When we were shooting, I’d roughly know how many seconds we needed to fill in each scene and we’d improvise with whatever was lying around our flat.

Animation felt like almost my only option after realising that I had no friends who would be willing to act on-camera, and deciding that I wasn’t brave enough to attempt directing the band in person. It was also winter and the idea of location scouting by myself, on a bike, in the snow, just didn’t seem like fun. Once you’ve restricted yourself to making a video in your own flat with no actors, your choices are pretty limited.

I was also quite aware that technically, I was pretty clueless.  I reckoned animation would be quite forgiving of my mistakes and convinced myself that any wonky bits merely added to the charm of the video.

The whole thing took 5 days from beginning to end. We would start filming as soon as it got dark and worked until we couldn’t stay awake any longer. I’d edit the footage in the afternoon and we’d start shooting again after we’d eaten our tea. I stayed up for the last two days straight due to my bad time-management leaving us a minute short.  I had to wake Alex after she fell asleep at the end to let her film the last frame… But despite being unbelievably tired for a week, it was great fun.

My friend Andrew helped out one night and put a whole bunch of really cool little things in the crazy kitchen scenes that I didn’t even notice until I watched the finished film. The coloured cups dancing in our cupboard and the magnets retreating into the fridge blew me away.

There’s also work by a few Scottish illustrators in the scene where the pictures on the wall keep changing (Sanna Dyker, Jen Collins, Lizzy Stewart and Elph amongst others). I included all those drawings and prints as a little ‘hello’ to folk I really like. I stupidly managed to break our clock putting that scene together, you can just about see the smashed glass in the last few frames.

I think anyone who works in an artistic field will usually have an interest in other mediums and a good eye, so

I don’t think someone from an artistic background would take a significantly different approach to a music video than a filmmaker.  There’s definitely overlap. Art, design, illustration and film making are all concerned with ideas first and foremost – if you’re good at thinking up ideas, you’re likely good at finding solutions too. Being less absorbed in technical details probably makes you tackle things differently, which can be a good or a bad thing.

It’s definitely possible to make a good video in the time left in this competition.  Some of the best music videos are so simple it’s astonishing. Velouria by the Pixies must’ve taken what, 20 seconds? All you need is one good idea. Two if you’re showing off.

My advice to anyone making their first music video would be, don’t be a perfectionist, have fun and prepare to have the song stuck in your head for a long time after you’re done.”

If that has convinced you that you can make a music video in the next ten days, here’s what you need to do.

1. Go here and listen to the tracks.

2. Choose one you want to make a video for.

3. Attach your finished video as a Quicktime file to an email.

4. Send this to mymusicpicture@tentracks.co.uk by midnight June 21st 2011. 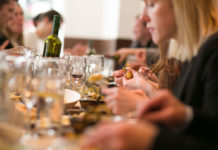 Competition – win a meal for two at Shezan Restaurant