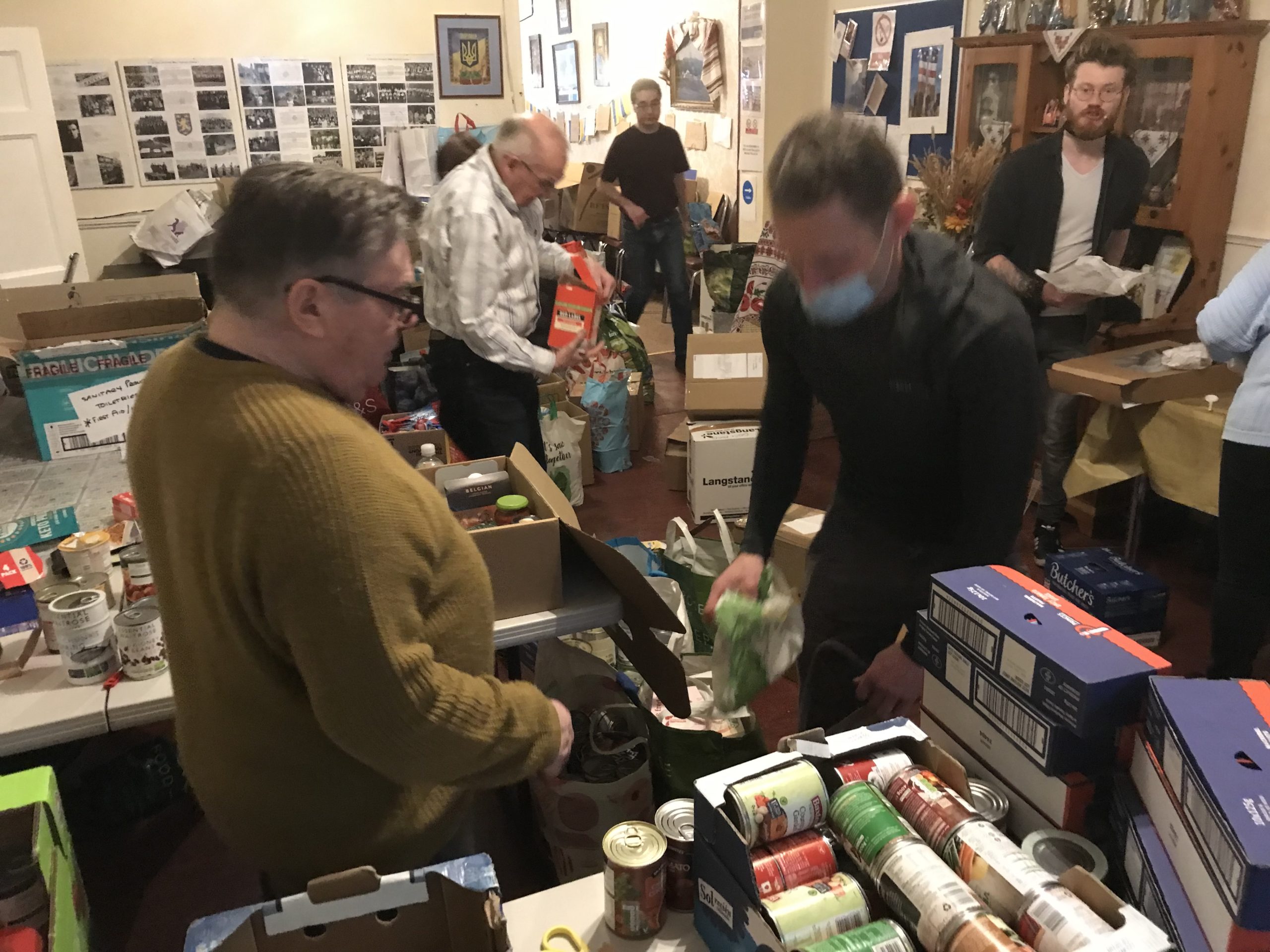 Our reporter Bruce Whitehead answered the call for volunteers during a shopping spree in the capital. The Ukrainian community in Edinburgh has gathered at the Edinburgh Ukrainian Club on Royal Terrace where donations have swamped volunteers.

I’m sitting in Topping’s excellent bookshop at the top o’ the Walk, with Chopin tinkling on the PA system. I’m leafing through photos of the Passchendaele carnage of 1917 in a book written by my wee sister’s ex. I’m thinking how another bloodbath may be about to ensue in the mud of eastern Ukraine.

Then my phone pings, and it’s a message from a friend, sharing a call from the Edinburgh Ukrainian Club for volunteers to help pack clothes and food donations bound for Ukraine. As the club is only a few yards away on Royal Terrace, I complete my purchase and head up there.

A volunteer in a Ukrainian national football team shirt is taking names and numbers. He ushers me in and promises to look after my shopping (there are a lot of shopping bags). Inside are about twenty people, mainly women, working away, opening bags and boxes of donations and sorting them. There are signs on the wall indicating that baby food should go here, new clothes here, sleeping bags there, shoes over there… but the signs don’t seem to relate to what’s in the boxes…

I’m the kind of volunteer who likes to be given a clear task and then do it as quickly and as well as I can so everyone thinks I’m a hero. But this is a bit confusing so I make myself generally useful instead, picking up garbage and disposing of it. As I’m doing this, the boxes run out so I start making new ones, using a big gaffer-tape dispenser to seal the flaps down. Then I get a little tired of that and start to eye up the free food. This is the free food:

The intriguing coloured bagel is a little scary at first, especially as it has “FILL YOUR HOLE” on the wrapper. It’s been donated with a dozen more by Brossbagels. It is delicious. I try the tea. It is lovely and apparently the key ingredient is a large animal-like mushroom, says Irina, who made it. (Oh gawd, am I going to start tripping now…?)

I get back to the fray. Here’s a short video of what the donations look like:

I chat to Irina. She is Ukrainian and has family in a village outside Kyiv (I am now saying Kyiv. At first I was being difficult about it: “Are we going to start saying Roma and Paree???”. Then the penny dropped, and I joined the Ukrainian side. It is the UKrainian pronunciation and the one which relates to the chicken dish is the Russian.)

Well, I am a journalist and try to remain strictly objective. So I read Tariq Ali and watch Oliver Stone, with their take on what caused the war. I try to debate with people online, to understand Russian claims and motivation. But my heart’s not in it. Then Putin invades, and kills MANY civilians. The ones he’s supposedly saving from the neo-Nazis. Debate over. Except for one thing: the world must never again turn a blind eye when any country bombs civilians.

Irina is singing now, reminiscing and crying a little, so she stops and goes back to her sorting. I get Nadja to write what’s inside each box with a Sharpie pen. “I’ll write it in Russian,” she says, “so everyone who handles it will know what it is.” I marvel at the multilingual – especially when they are also multi-alphabetic.

I talk to the organiser, Hannah Beaton-Hawryluk, of the Association of Ukrainians in Great Britain, who it turns out lives near me in South Queensferry. She is calm, cheerful and tolerant of some joshing blokes, who I guess are club members, but who aren’t doing any work.

She begins by telling me that she no longer wants any more clothes. Wait, what??

“We simply don’t have any more manpower,” she explains. “But we are sorting through all the remaining baby items, sanitary products and toiletries, and these will be going to our storage unit that was kindly donated to us by the Tattoo Office. We’re negotiating with a haulage company that will take it all to Ukraine or Poland. I want to make sure that whatever we do gets to the right people and doesn’t go on the black market or get dumped.”

Hannah now says the best way to donate is to the the DEC (Disasters Emergency Committee) which the government has pledged to match. “The best thing we can do to support the people on the ground in Ukraine is by sending them funds, it goes straight to the Ukrainian Red Cross and they buy what they need and target it to the right places.”

And if, like me, you can’t stomach giving money to the DEC’s member charities when they pay their chief executives up to £173,000 a year to work in big shiny London offices, there’s always the Association of Ukrainians in Great Britain, which has its own fundraiser.

I nip downstairs to get some more gaffer tape, and take some Victoria sponge which I have carefully sliced into about 20 bits to offer around. I tell everyone ‘yes’ when they ask if I baked it, but they know I am lying. There are even more people working in the kitchen, sorting the mountains of tinned and dried food. Oh, and about fifty sleeping bags, some of them brand new with the price attached. Hoarded by affluent westerners who can afford to hoard… now glad to get their guilty secrets off their consciences. I am so cynical.

I’m also dog tired. I was doing strenuous shopping before this after all. Alas, child-minder beckons, so I head up to catch my bus and find it has changed its departure point yet again. A loose pavement slab squirts muddy water neatly up my trouser leg. But at least I get on and don’t have to queue for hours to leave a burning country. And for that I am most profoundly grateful.