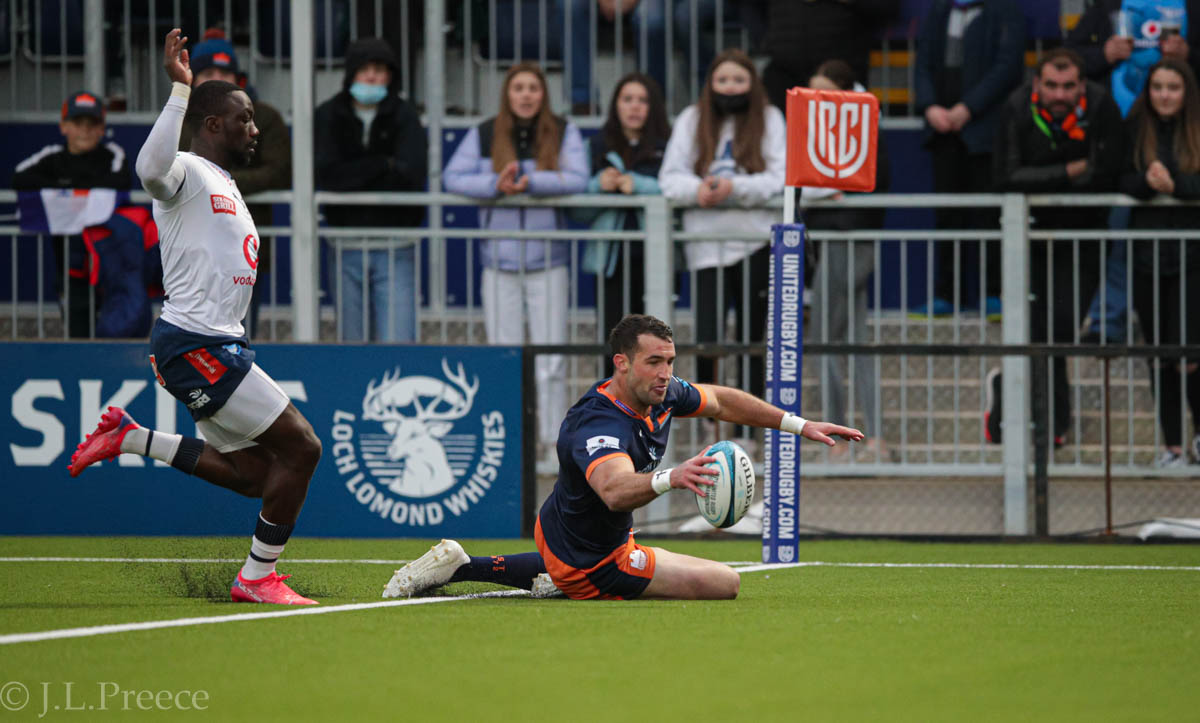 Another South African side on the bounce were Edinburgh Rugby’s Round Four opponents in the 2021 United Rugby Championship as the Vodacom Bulls lined up to try and do what the Stormers had failed to do the previous week and beat Edinburgh at home.

The hosts’ were straight up into the Bulls’ faces right from the start forcing the visitors to try to break out rather than kick. But, they retained possession well and managed to kick clear eventually.

There followed a brief exchange of aerial play before Edinburgh took took to running the ball back. A combination of backs and forwards pressed the Bulls back into their 22, but the South Africans forced a penalty and regained the ball.

In the runup to the opening try, the home side flung the ball about, keeping the Bulls on the hop until they regained the 22 then Damian Hoyland went back to the boot, slotting a neat grubber through the line, where the chasing Henry Immelman collected the ball just short of the line and slid in for the try and 5-0. Jaco van der Walt then missed with his conversion so it stayed at 5-0 with eight minutes played.

The next period was fairly evenly matched despite being mostly played in the visitors’ half. Their defence was, on more than one occasion, more than capable of snuffing out the home attack, with their wingers proving to be particularly elusive, but they were finding it difficult to get out of their territory.

When they did, they looked quite dangerous, but Edinburgh gave as good as they got in the defensive stakes and only a 21st minute, successful, penalty from the visitors’ Chris Smith for 5-3 worried the score board.

Something had to give though and another penalty gave van der Walt the opportunity to advance the scoring, which he duly did for 8-3 in the 28th minute.

The next six minutes it was a case of attack, penalty, repeat as the Bulls were, again, held tight and, again, were penalised for their efforts as successful kicks from van der Walt on 32 and 36 minutes saw the score out to 14-3.

It wasn’t all good news though when, just on 40 minutes, as the Bulls were up in Edinburgh’s 22, van der Walt suffered a serious looking shoulder injury which had the stand-off clutching the joint in agony, before being helped from the field by the medical staff. So half time and it was 14-3 to Edinburgh. And the rain was on…

With van der Walt off, James Lang stepped up to the tee for the first penalty attempt a few minutes in, but he struck the post high up so the score stayed at 14-3.

With the rain falling and slippery conditions prevailing, the game became a bit of a repeat of the previous match, being largely confined to the middle with only a couple of 22-bound breaks on the cards.

Then, with just over 10 minutes left on the clock, the Bulls launched a drive that was to prove decisive. Pushing the home side back to their line with a combination of running and penalties, the visitors pack set to and rucked their way almost 20 metres across the front of Edinburgh’s posts before something had to give.

And it was the defence that folded as the Bulls’ captain, Marcell Coetzee burrowed over for the try. Veteran stand off, Morné Stein, then converted for 14-10 in 70th minute.

Three minutes later, the gap was extended as Mark Bennett, deputising for, the now injured, Lang converted a penalty from wide for 17-10 after 73 minutes.

As Edinburgh tried to get clear just after the restart, the Bulls turned the ball over on the fringes of the 22 and quickly recycled the ball out to Steyn. His experience then came to the fore and his cross-field kick was gathered by Madosh Tambwe out on the right wing and the No. 14 looked like scoring all day as he skipped past Hoyland and made tracks for the line.

However, it was Edinburgh’s other winger, Darcy Graham, who ran Tambwe down and ‘stopped’ him short of the line. Tambwe scrambled clear and touched down, but a lengthy TMO consultation deemed that the South African had been tackled so his scramble for the line was, therefore, a double movement and “no try”.

And that was the final line-worrying play as the game drew to a close with at 17-10 giving Edinburgh their second win in the URC. They now sit in third place in their Conference on 13 points, even with Ospreys and two points behind Glasgow Warriors.