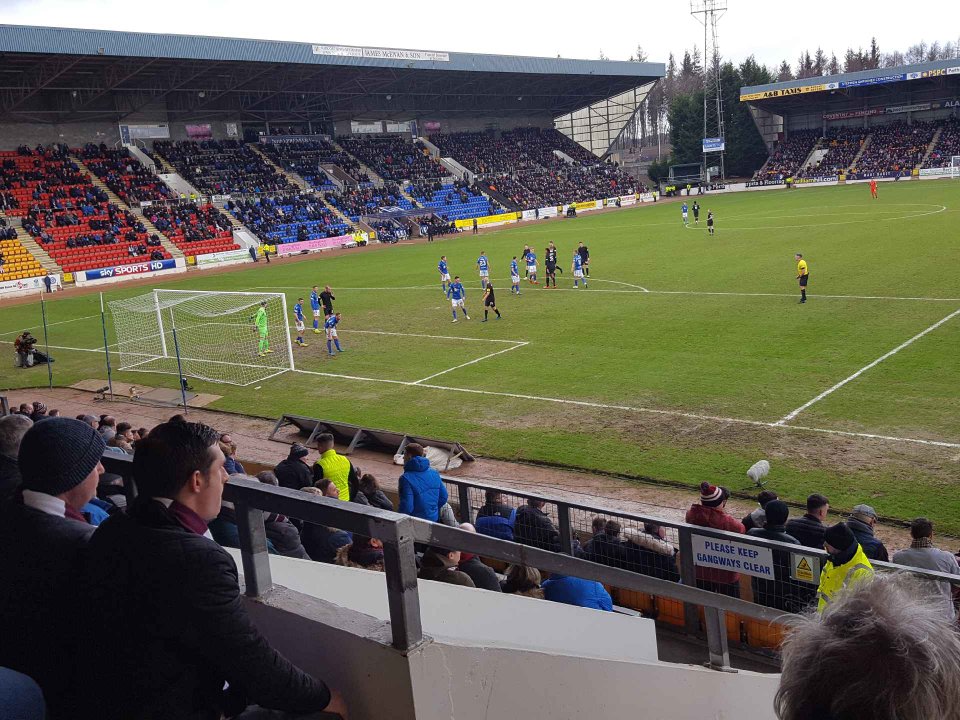 A last gasp goal from Sean Clare earned Hearts a 3-3 draw in Perth on Saturday afternoon and was enough to lift the Gorgie club off the foot of the Ladbrokes Premiership table.

Hearts went behind early in the game but came back through goals from Liam Boyce – his second in two games – and captain Steven Naismith to lead at half time. However, Daniel Stendel’s men were forced back in the second half as St Johnstone scored twice and were poised for three vital points – until Clare’s dramatic late goal.

Hearts manager Daniel Stendel strives for consistency for his team and he made just one change to the team that defeated Rangers at Tynecastle last Sunday – Ryotaro Meshino replacing Lewis Moore.

Backed by a huge travelling support, daring to be optimistic once more, Hearts began the game positively and were on top in the early stages. Naturally then, the home side took the lead in the 17th minute. McCann set up May and the former Aberdeen striker fired past Hearts keeper Joel Pereira to make it 1-0.

The goal was against the run of play, but Hearts didn’t feel sorry for themselves for long. Nine minutes later Andy Irving played a delightful pass for Toby Sibbick who crossed for Liam Boyce to stab the ball home and draw parity.

Five minutes later and Hearts were in front. Saints keeper Clark didn’t deal with a Hearts corner. John Souttar hooked the ball towards goal and Steven Naismith nodded the ball home to put the Jambos ahead.

Hearts could have added a third goal when Sibbick tried a long-range effort which went inches wide.

Whatever Saints manager Tommy Wright said to his players during the half-time interval had the desired affect as the home team came out with all guns blazing. After Wotherspoon came close, St Johnstone deservedly equalised when May set up McCann who blasted home although Joel Pereira may feel he could have done better.

It was all Saints now as the Maroon Army began to wonder what had happened to their team. Slack play from John Souttar almost allowed the home side to take the lead when May saw his shot trickle wide.

In the 62nd minute the goal St Johnstone had threatened arrived. Hearts Craig Halkett pulled back Kerr inside the Hearts penalty box. Penalty said referee Greg Aitken before booking Halkett for his trouble. May buried the penalty kick and from being 2-1 up, Hearts were now trailing 3-2 and looking in serious danger of losing the game and remaining bottom of the league.

The home side almost clinched all three points in the 87th minute in spectacular fashion. Hearts keeper Pereira was caught up the park and Saints striker May tried his luck from around 45 yards. To his anguish, the Hearts keeper recovered sufficiently to stop the ball crossing the line. It was to prove to be a defining moment.

With three minutes of stoppage time played Hearts had one last chance. Steven Naismith fired a long ball towards substitute Uche Ikpeazu and Liam Boyce. The ball fell into the path of Sean Clare who blasted a glorious shot from 25 yards which flew into the net for Hearts equalising goal.

It secured a 3-3 draw and meant Hearts moved off the bottom of the league table on goal difference from Hamilton Academical – who play Celtic on Sunday. It’s a point that may yet prove crucial at the end of the season.

Daniel Stenger had mixed emotions after the game. He told BBC Sport Scotland:

“First-half, we played very well and controlled the game. At 2-1 at half-time, I said to my players to play the same and we would win. But I have no explanation for the second half.

“We can be happy we got one point in the end. Our defending was so bad in the second half. I need some time to understand what happened.”

Thanks to Ian Bell of Aberdeen for the action shots.