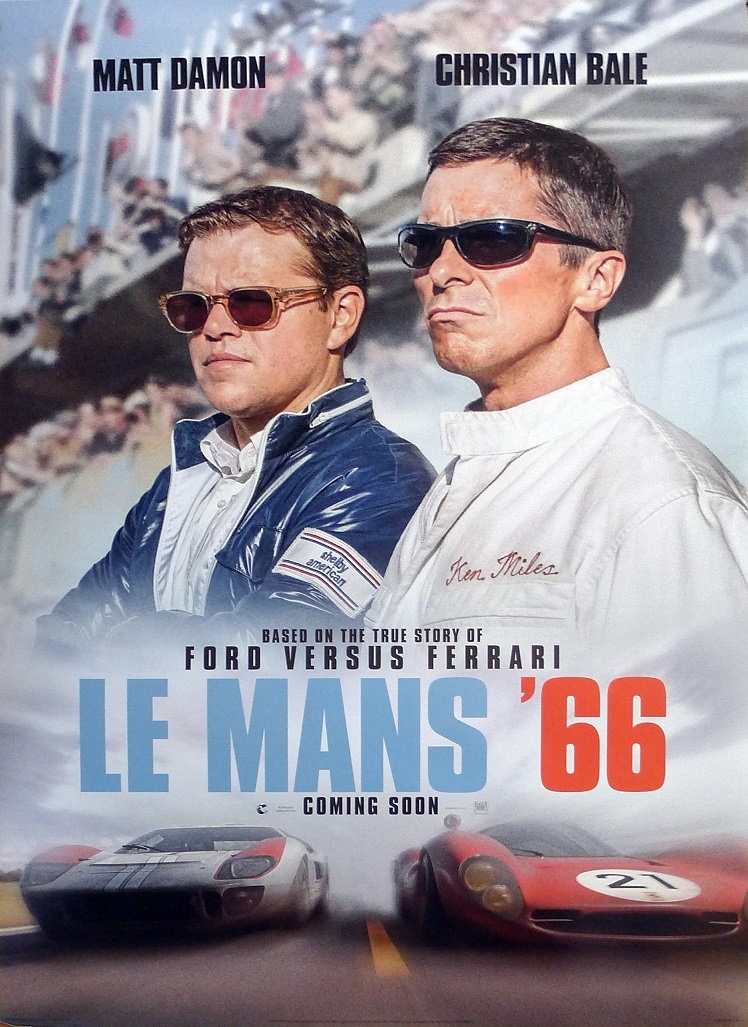 A two and a half hours wonder of filmmaking tour de force.

You hear the race cars before you see them, the roaring vibrates from the cinema screen and fades in and out from the opening to the end credits.

Roaring into action with a literal road race, ‘Le Mans ‘66’ focuses on the 24 hours of Le Mans, the oldest active endurance sports car race in the world and the rivalry between Ford and Ferarri to win it. Indeed, the film is titled ‘Ford v Ferrari’ in almost every other territory. Brace yourself for a showdown of technical excellence in speed, skill and endurance as we go behind the scenes of the enduring annual endurance competition and the car manufacturers that vie for victory.

Introduced in quick succession are Carroll Shelby (Damon), an American car designer and engineer, and Ken Miles (Bale), a British professional race car driver whose relationship drives the film as much as the exceptionally mounted racing action sequences.

In an effort to rebrand its image for a new generation and become a carmaker of artistry instead of mere practicality, Ford attempts to buy a bankrupt Ferrari who have won the last four Le Mans events.  But Ferrari choose Fiat prompting Ford to challenge their racing dominance at Le Mans by designing, building and testing a car of their own in order to beat Ferrari at their own game.  That’s the plan anyway.

In ninety days, Shelby and Miles, backed by Ford, must fight the limits of automotive engineering, the corporate structure and occasionally each other (you won’t be disappointed) to emerge triumphant.  Although branded difficult off the track, Miles excels on it.  A maverick driver with ideas to match is needed and he comes in the form of Miles, but Beebe has other ideas to make his mark.

Gorgeous cinematography presents the film as shot in a perpetual hot summer sunset, adding to the exotic nature of sports car racing and the people that make it happen.  Shelby and Miles are heat stroked and grease oiled to within an inch of their lives, leaving only the overpowering petrol fumes to the imagination, especially while the racing game is underway at various events preceding, as well as, Le Mans which is a spectacle of filmmaking in itself.

Attention to minute details like these are representative of a data focused yet mechanical industry where time, weight and size can mean the difference between success and failure, separating the winners from the losers, becoming legends or footnotes in history.  Essentially a period film set over half a century ago, for all the time and effort spent in search of the perfect lap the passion for driving and love for machines is what envelops us most.

Visually magnetic and emotionally bittersweet, ‘Le Mans ‘66’ is one of those films where the act of reviewing becomes impossible while the act of viewing befits compulsion.  While this is great at the cinema, it doesn’t make for great note taking come the time for writing.  It exists in the same filmic tone as ‘Logan Lucky’ from two years ago and benefits from little if any handheld camera nonsense directors resort to in order to reflect a realism that we don’t require nor desire.

Surprisingly romantic and entertaining to a fault, the film benefits from well executed editing and dynamic sound design. Commanding monologues allow for a fireworks display of charismatic acting performances from Letts, Lucas, Damon and Bale. After four Oscar nominations this decade will Bale finally win Best Actor next year? While his Dick Cheney in ‘Vice’ brought him close, ‘Le Mans ‘66’ could push him over the finish line.

Prepare for high stakes in the front seat, the first shot gives us a driver’s eye view, as drama punctuates the levity to draw the film away from mere satisfactory viewing.  A soundtrack of drums and guitars, acoustic and electric, with tyres screaming and engines revving pulsate through the film, instilling a genuine adrenaline rush for each characters’ destiny as one becomes so invested in them.  Armed with a propulsive script and muscular production values, ‘Le Mans ‘66’ is quite simply a cinematic tour de force.