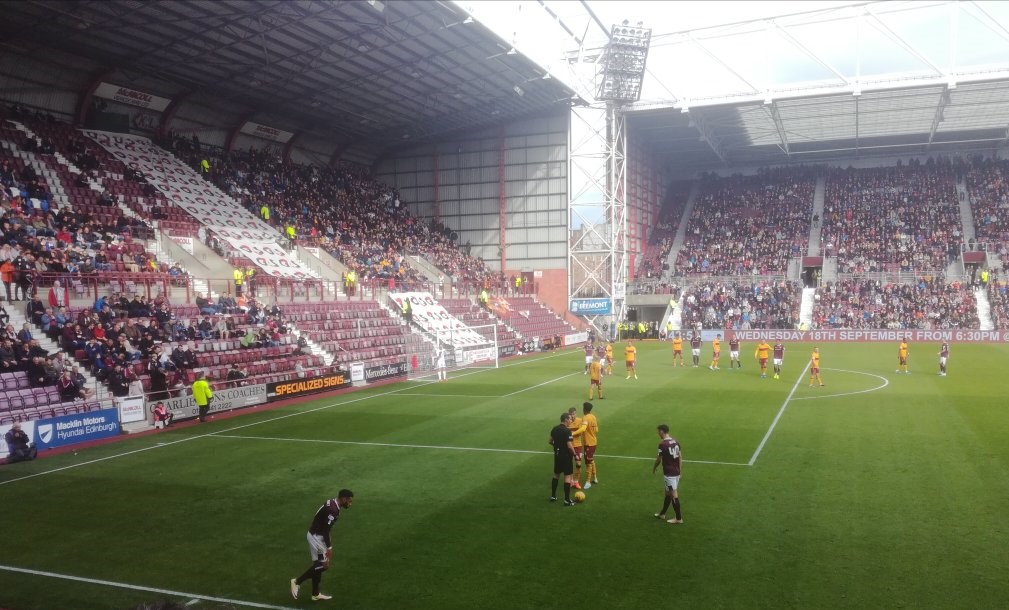 Hearts sank to the bottom of the Ladbrokes Premiership after another hapless performance at Tynecastle Park this afternoon. Motherwell exacted revenge for their Betfred Cup elimination to the Jambos three weeks ago by winning more comprehensively than the final score suggests.

Under fire Hearts manager Craig Levein made three changes to the team that failed to beat Hamilton Academical in Gorgie two weeks ago. Conor Washington dropped to the substitutes’ bench while Aidy White and Euan Henderson dropped out altogether. Uche Ikpeazu returned while there were surprise inclusions for Jamie Brandon and Steven MacLean, making his first start of the league campaign.

With Hearts supporters unhappy at the way their favourites have started the season the atmosphere inside Tynecastle was muted as the game got underway. And there wasn’t much to get those fans off their seats as the home side reverted to type with aimless long balls towards Ikpeazu bringing little reward.

The warning signs were certainly there that Motherwell fancied their chances and they nearly went ahead on 20 minutes when Gallagher fired in a long-range effort which Hearts keeper Colin Doyle tipped over the bar. However, the goal was merely delayed. From the resultant corner, Gallagher headed home unchallenged to give ‘Well the lead. Cue the first signs of anger from the home support.

This increased in volume when the visitors almost added a second when Seedorf left Jamie Brandon for dead before setting up Polworth, but his effort was just too high.

Hearts passed up a great chance to equalise after half an hour. Ikpeazu’s persistence saw him pass to Steven MacLean who laid the ball on a plate for Sean Clare inside the Motherwell penalty box. However, the Englishman felt an extra touch was necessary and the chance was gone much to the angst of the home support.

Just before half-time Motherwell nearly doubled their lead when Donnelly curled a great effort which smacked off the Hearts crossbar. The Hearts players traipsing off the field at half-time to a chorus of boos told its own story.

If the home support thought things could only improve in the second half they were sadly mistaken just seven minutes in. Slack play from Hearts in midfield saw Seedorf collect the ball, saunter forward and smack the ball into the net off the crossbar to double Motherwell’s lead. This was enough for many Hearts fans who headed for the exits – with 38 minutes left to play. They clearly felt the chances of this punch less Hearts side clawing two goals back was remote.

But Hearts did pull a goal back with half an hour to play when substitute Ryotaro Meshino skipped past the Motherwell defence before blasting a shot on goal. This was pushed into the air by ‘Well keeper Gillespie before Ikpeazu headed home. 2-1 and was it now game on at last? Sadly not.

Five minutes later Motherwell restored their two-goal advantage and it summed up the disorganised nature of Hearts tactics and performances of late. Levein inexplicably moved attacking midfielder Sean Clare to right back. A long ball forward by the visitors seemed harmless until Clare allowed Hylton to get to the ball before the Motherwell man stroked the ball past a bemused Colin Doyle to make it 3-1. As Doyle and Clare argued over who was to blame many more Hearts fans headed for the exits.

Hearts misery was compounded when substitute Conor Washington pulled up in obvious pain and had to leave the field. As Levein had used all three substitutes, Hearts were now down to ten men.

However, the home side did pull a goal back when Meshino danced past two Motherwell players before curling a fine effort past Gillespie to give Hearts some hope. But it was too little too late, and Motherwell secured a well-deserved victory.

After the Hamilton game, Craig Levein said the international break would give him a couple of weeks to work on the defensive side of his team. Either he didn’t bother, or his players didn’t listen to a word because the Hearts defence was shambolic all afternoon.

After the game, the Hearts manager wore the look of a haunted man as well he might be. He told BBC Sport Scotland:

“I’m not concerned about the effort in the game, that was plain for everybody to see. I just feel they’re a bit pressurised just now and a bit lacking in confidence.

“Sometimes the pressure gets to people in different ways. One of the ways is they don’t show for the ball as often as they should do, which then leaves the player on the ball with less options. So, we need to get over that, we need to go down to Easter Road next week and put on a good performance.”

At the final whistle dozens of Hearts supporters gathered outside Tynecastle’s new main stand to protest with chants of ‘Sack the Board’ – of which Levein is part of – and ‘Craig Levein We Want You To Go’.

During the game the Motherwell fans chanted ‘You’re Getting Sacked in the Morning’ towards the Hearts manager. Tellingly, the Hearts support applauded, and the consensus was ‘we hope so’.

Whether Ann Budge was taking any notice time will tell. But the appointment of Levein as Hearts manager has not worked and its now damaging the relationship between the club and its supporters. Something Mrs Budge, despite her loyalty to Levein, seriously needs to consider.

Top man: Are you kidding?