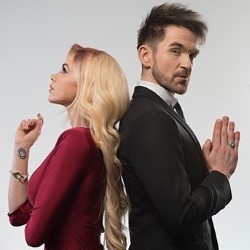 I’ve been going to see Colin Cloud at the Edinburgh Festival Fringe for the last five years now. And every year he never fails to entertain, amaze and astound.

The illusionist extraordinaire has appeared on the Royal Variety Performance and recently appeared on America’s Got Talent. His shows at the Fringe are one of the highlights of the three-week arts and entertainment extravaganza and this year has proved to be no different.

This year’s show is called Sinful and for the first time he has a special guest – his fiancée Chloe Crawford.

The great man begs the question – are you an honest person? And, having answered – did you just lie to yourself? Believe me Colin Cloud will know – he knows everything about you.

He listens to your whispers and gleans those innermost secrets.

Without giving too much away, I can say that Colin Cloud is at his most brilliant this year. I always leave his shows asking myself ‘how the heck did he do that?’ I don’t know – and, if truth be told given what he knew of some of his unsuspecting audience the other night, I don’t want to know.

His shows are utterly compelling – he is simply a genius. His show is well worth the rather lengthy wait in a queue outside the Grand at the Pleasance, even allowing for the stewards rather messing up the queuing system for Tuesday evening’s performance.

Colin Cloud – Sinful is at The Grand at The Pleasance Courtyard until 25th August. Tickets here