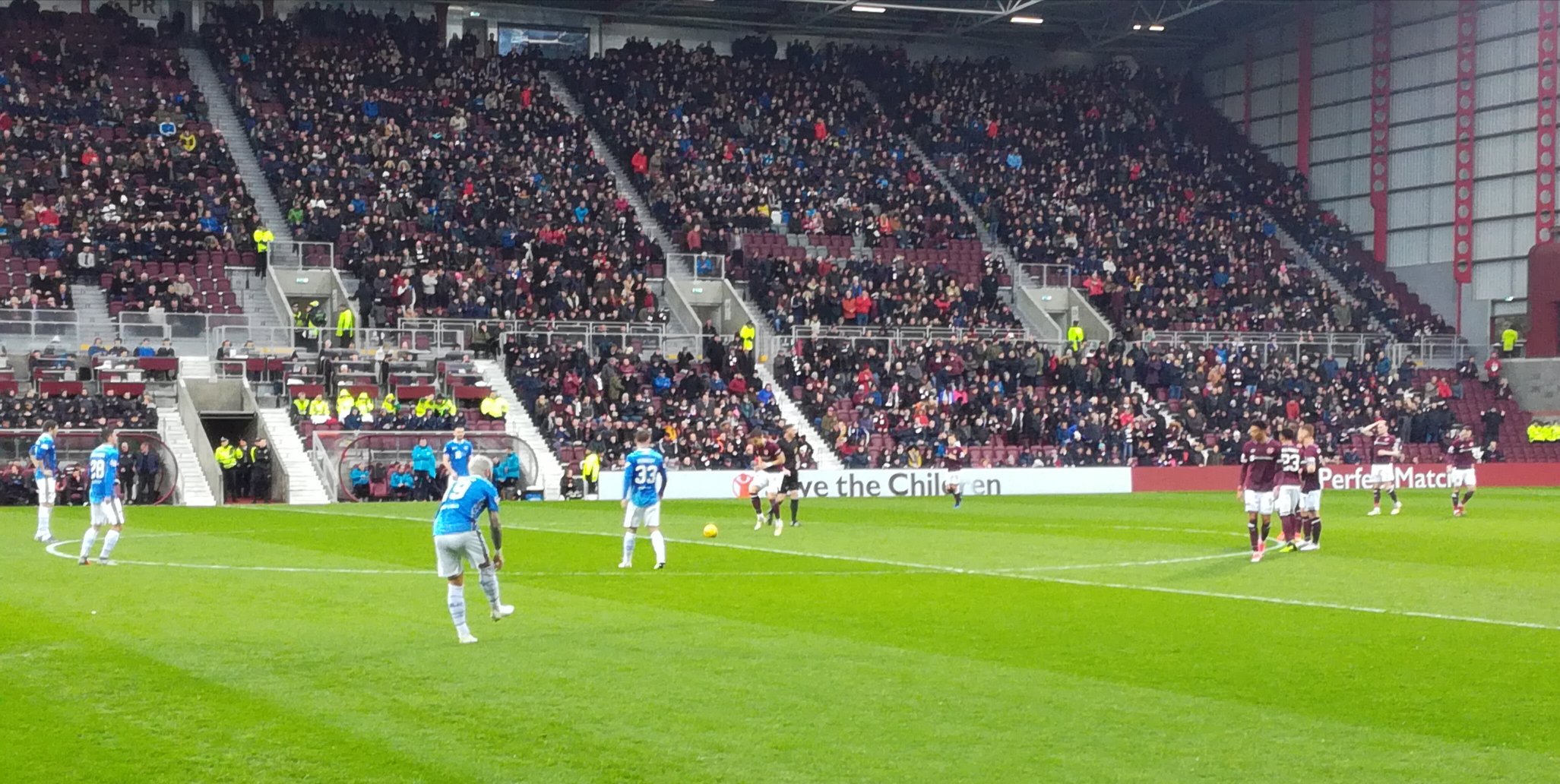 Like a boxer refusing to give in, Hearts bounced back off the ropes following their defeat from bottom club Dundee on Wednesday evening to produce a much-improved performance against in-form St Johnstone at Tynecastle on Saturday.

Marcus Godinho and Callumn Morrison – both scoring their maiden first team goals in maroon – secured a 2-0 win over a team who had the best away record in the Ladbrokes Premiership.

Hearts manager Craig Levein was, like the majority of the Hearts support, less than impressed with his charges during the week and he made five changes. Conor Shaughnessy paid the price for his costly error on Wednesday and he joined Demetri Mitchell, Callumn Morrison and the man criticised by Levein after the game, David Vanecek on the substitutes’ bench. Aidan Keena dropped out completely. In came Oliver Bozanic, Jake Mulraney, Marcus Godinho, John Souttar and Steven Naismith, now free from suspension.

I criticised Hearts on Wednesday for their long ball approach. Now, I don’t know if Craig Levein reads the Edinburgh Reporter, but Hearts played a different style against the Perth Saints, much more of a passing style. And it worked.

Hearts almost opened the scoring early in the match when Godinho won a joust with Saints keeper Clark, but the Canadian’s header hit the crossbar.

As he did against Dundee, Arnaud Djoum was controlling midfield and just before the half-hour mark, the Cameroonian dinked the ball forward to Steven Naismith who then fed Olly Lee. The Englishman backheeled the ball back into the path of Djoum who set up Oliver Bozanic whose cross just eluded Naismith. It was a fine move, the likes of which was sorely absent against Dundee.

Another brilliant pass from Djoum found Jake Mulraney but the former Inverness Caley Thistle man’s shot on goal was deflected against the post and the chance was gone.

Hearts performance was much more pleasing on the eye and two minutes into the second half Sean Clare fired the ball past keeper Clark only to see it smack off the post and spin back into play.

It was no surprise when Hearts finally did go ahead in the 52nd minute and it was a goal to savour. A cheeky lob into the Saints penalty box from John Souttar was controlled brilliantly by Marcus Godhino and he fired past Clark for his first Hearts goal.

It was all Hearts now and Clare had a couple of decent chances but couldn’t take them. Olly Lee then fired in a free-kick from the edge of the penalty box which produced a fine save from Clark.

Just as Saints threatened, Hearts sealed all three points in stoppage time when they hit the visitors with a counter-attack. Olly Lee set up Callumn Morrison and the winger blasted the ball past Clark from the right. Like Godinho, it was his first goal for Hearts first team.

The difference in Hearts performance from Wednesday was like night and day. They’re attractive to watch when they elect to pass the ball rather than lump it forward. The returning Steven Naismith – he never gives his own team mates peace never mind the opposition – helped as did John Souttar who strolled through the game to the extent I thought at one point he was going to light up a cigar.

Craig Levein was naturally delighted after the game. He told the official Hearts website:

“I was thrilled to bits with them today for their controlled performance. I really can’t remember St Johnstone having a shot at goal – and they have a great record away from home.”

“There’s a lot of players who were very, very, good today and I’m pleased that on Foundation of Hearts Day the supporters got to see a victory to thank them for all the help they’ve given the club in recent years.”

“The first goal was an unbelievable pass from John Souttar, but Marcus showed great composure to bring the ball down – and then he panicked and just hit it, and it went in” Levein went on.  “Callumn has been promising to score from those kinds of positions and it was great for him as well.”

Levein was full of admiration for the returning John Souttar.

“I’m always impressed with John but the fact he has been out injured for a long period of time and played about 30 minutes the other night, it looks like he hasn’t been away. He’s worked really hard to get himself back to a position to get back on the field and I thought it was an imperious performance by him when you consider how long he’s been out. It looks like he’s just picked up where he left off.”