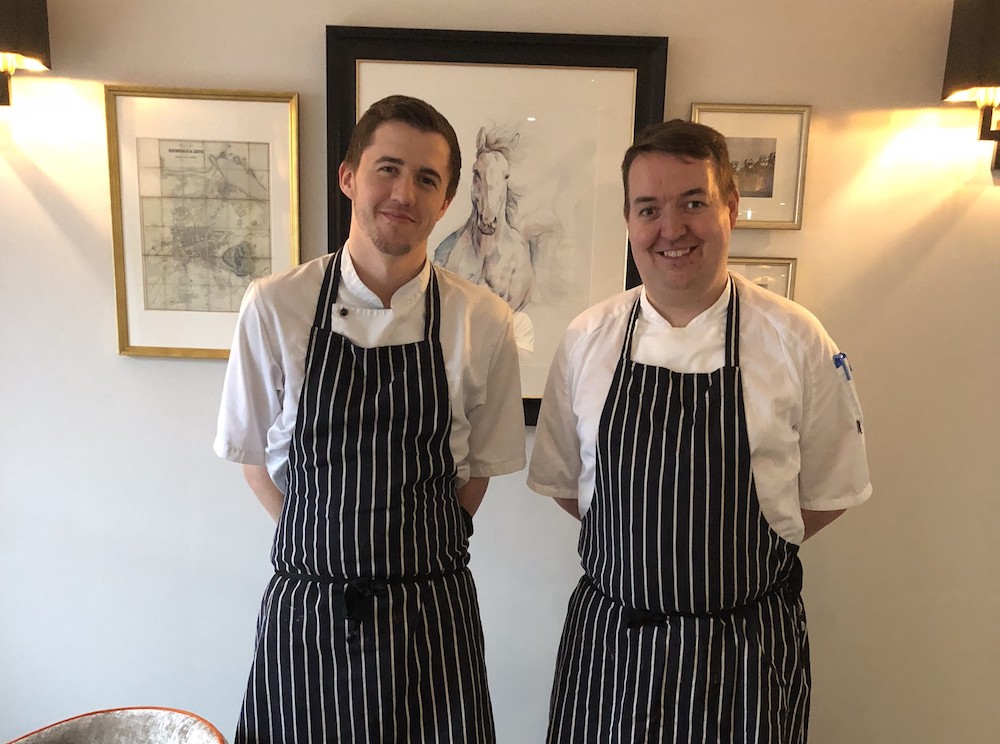 An ambitious young duo at Edinburgh’s largest independent hotel are making a name for
themselves in the capital’s bustling chef scene.

Ten Hill Place, run by the commercial arm of the Royal College of Surgeons, Surgeons
Quarter, has advanced its operations with the promotions of their two expert
chefs, Alan Dickson and Jamie Reid.

At a time when the organisation’s development is showing no signs of slowing down, Alan,
29, has undertaken the role of Executive Chef, while Jamie, 23, has taken up
the position of a Head Chef. Together, the Edinburgh-born pair are cooking up a storm, whether it’s catering for every
day clients at their 150-guest restaurant, Drinks & Dining, or for special
events and 500-person conferences organised by Surgeons Quarter.

Alan said: “It’s a great time to be a part of Ten Hill Place, especially following the recent
expansion of the hotel and restaurant. The team is growing and we’re busier
than ever which definitely keeps the adrenaline levels high.

“The role that I’m now undertaking has never previously existed at Ten Hill Place, so it
really shows how far we’ve come. We’re moving towards accommodating and
catering to even larger volumes of people across a whole range of events which
is hugely exciting.”

Alan, who was crowned Hotel Chef of the Year at last year’s Scottish Hotel Awards, started
his adventure with cooking at the age of 19. He was working as a part-time
waiter at the time when he decided to test his skills on the other side of the
kitchen door – and he hasn’t looked back since.

The new position will mean that Alan takes a step back from the hustle and bustle of the
kitchen to oversee the logistics of running the establishment.

The skilled chef was in charge of redesigning the new purpose-built kitchen from scratch,
which is now six times larger than the previous facility. It includes all
electric, top of the range appliances which are extremely energy efficient,
such as induction hobs that can boil 20 litres of water in just 90 seconds.

Alan added: “I’m looking forward to all of the new challenges, but I would still love to be
standing by the stove all day. I am taking a step back from daily cooking, but
you’ll still see me in the kitchen – my office overlooks it and is right next
door.

“I’m thrilled to have the opportunity to help build the necessary infrastructure to
support the expansion of the hotel and I’m intrigued as to where we’ll be in
five years’ time.

“We’re very unique compared to other hotels in that we have a lot of creative freedom in
the kitchen and the space to put fresh ideas forward on a regular basis.

“With visitors of all nationalities and backgrounds coming over to the various events
and conferences organised through Surgeons Quarter, the team constantly gets to learn about, and perfect their skills in, world-wide cuisines.

“We’re big on using fresh, seasonal ingredients so creating different menus for these
events is always an interesting process and a good challenge for the imagination.”

Jamie’s determination and passion for his work has seen him progress quickly in the company, having joined the team at Ten Hill Place three years ago.

Jamie said: “At Ten Hill Place we have a young, driven team and all of us work incredibly well together. It’s really important to have that support structure, especially during times like the Edinburgh Fringe throughout which we had some of our record-breaking nights.

“It’s a tremendous place to work. The variety of work and freedom in creativity really
enables you to advance your skills. We go from creating menus for quiet lunches
at the hotel to fine dining at banquets and international conferences – no day
is the same.

“For the next event we’ve gone a bit more theatrical with our menu, and we’ll be shaping our canapes into different surgical elements, it’s quite exciting.

“Day to day life at the kitchen is also eventful. We have a big glass window which runs the
whole length of the wall and we always get curious people stopping by and peeking inside to see what we’re doing.

“Alan and I also have a very strong friendship and trust each other completely. It makes
running the kitchen a pleasure, as we know we can really rely on each other.”

Jamie discovered his passion for cooking when he was only 14 years old, while sitting
in a Hospitality class at Forrester High School.

He said: “It was one class that I’d always excelled in and loved so I carried on doing
whatever I could to pursue this passion. I found a job at a restaurant when I was 14, and left school at 15 to train in Professional Cookery full time.”

Following record occupancy numbers, Ten Hill Place’s recent expansion has increased the number of rooms from  from 77 to 129.

“With the team growing and led by ambitious, young, creative people, we’re making sure that Ten Hill Place is delivering its full potential.

“Our team here are creating quality fresh food and drink offerings, assisting our charitable aims or boosting tourism and hospitality jobs in Edinburgh.”

Alan and Jamie are now seeking a talented sous chef to join the expanding team on site.   Interested parties should contract our HR Manager on recruitment@surgeonsquarter.com.

Surgeons Quarter operates Ten Hill Place Hotel, Drinks & Dining, as well as all conferences and weddings in the college’s Old Town buildings. Its profits are given back to the College to advance surgical standards worldwide.