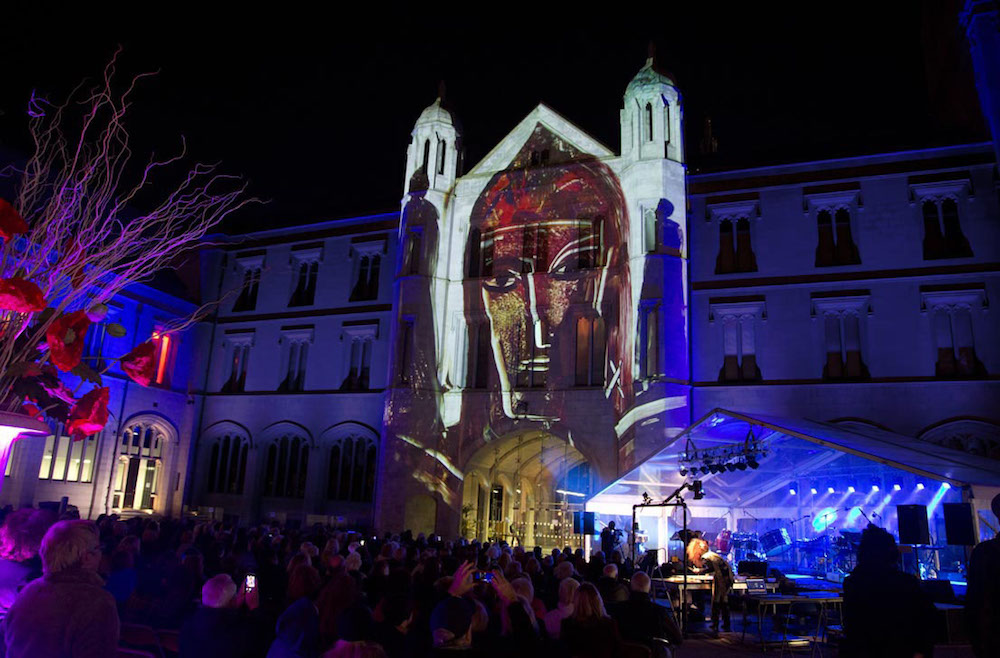 SHAMANIC is the brand new production by AniMotion’s Maria Rud, a visceral collision of live painting, music and architecture, on a grand scale. After her acclaimed collaborations with Evelyn Glennie (which premiered at NMS Grand Gallery and then toured to USA, China and Europe), the Russian born artist is taking the music in a new direction with a new show which includes contributions from Fay Fife (The Rezillos), Martin Metcalfe (The Filthy Tongues) Kid Congo Powers (The Cramps, The Bad Seeds), Mike Baillie (The Skids), Chris Agnew (The Rezillos) plus actress Rula Lenska and Edinburgh’s DJ Dolphin Boy.

There will be specially composed atmospheric music, forming the background to Rud’s energetic and dramatic painting. This will be projected onto the architecture of the Old College Quad. Images and sounds will constantly evolve during the performance creating a sensual overload.

The music created for SHAMANIC is a soundclash of 60s garage, alternative rock and contemporary electronica, laced with a punk spirit. That defiant DIY spirit runs through all aspects of the show’s development.

Collaboration is at the core of SHAMANIC. Edinburgh based AV specialist War Productions Ltd is not merely the sponsor, but a collaborative partner.

Thanks to this sponsorship, SHAMANIC will use the latest State-Of-The Art technology, enabling both the art project and the business company to develop, trail and showcase new AV applications. Independent charity Arts & Business Scotland is also providing match funding for War Productions Ltd’s sponsorship of SHAMANIC via its Culture & Business Fund Scotland. SHAMANIC is in partnership with, and was part inspired by, Rip it Up by The National Museum of Scotland which celebrates Scottish popular music, giving The Rezillos and The Skids the top billing.

The Edinburgh festivals might be over, but SHAMANIC promises a spectacular event to brighten the capital at the end of September, if only for one glorious night!

Tickets are available for the show only (some unreserved seating available) and also for the show + After Show Reception at the Playfair Library (for drinks, exhibition and meet the performers).