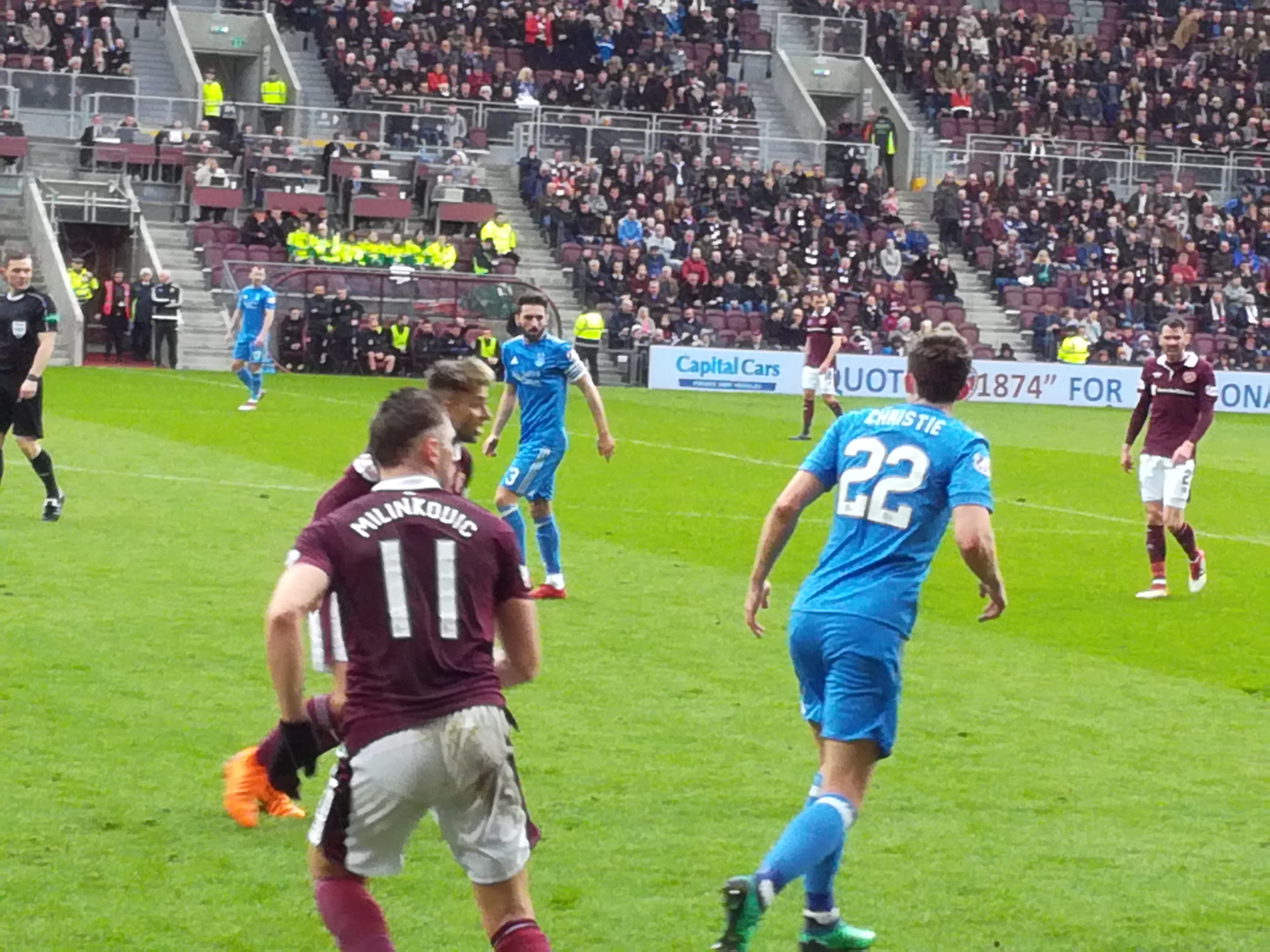 Hearts Jekyll and Hyde season continued at a soggy Tynecastle on Saturday afternoon as the Maroons despatched Aberdeen rather more easily than expected. Two goals in two first half minutes from Steven Naismith and David Milinkovic were enough to dent Aberdeen’s hopes of taking second place in the Ladbrokes Premiership and extend Hearts unbeaten run at the new Tynecastle Park to an impressive 14 games.

Hearts Head Coach Craig Levein made three changes to the team that under performed at Dundee six days ago. Joaquim Adao – so impressive in Hearts last performance at Tynecastle – was forced to miss out due to injury while Ross Callachan and Danny Amankwaa dropped to the substitutes’ bench. There was a welcome return for David Milinkovic while Connor Randall and Michael Smith also returned.

Aberdeen always bring a decent sized support to Tynecastle and there was a good atmosphere inside the stadium as the game kicked off. This despite Hearts having little to play for as the season reaches its climax.

The home side almost made a dream start. Just three minutes in, Aberdeen’s Considine allowed Don Cowie’s pass to find Connor Randall. The on-loan Liverpool player was denied by Dons keeper Lewis racing from his line, but his clearance only went as far as David Milinkovic who set up Kyle Lafferty, but the big striker’s shot curled over the bar.

Aberdeen began to exert some pressure and Considine got on the end of McGinn’s free-kick only to see his header bounce off the post. Logan then tried from distance, but his shot was no problem for Hearts keeper Jon McLaughlin.

Hearts weathered this early Aberdeen pressure and took the lead in the 18th minute with a fine goal. Milinkovic’s brilliant pass picked out Steven Naismith who jinked past a couple of defenders before firing past Dons keeper Lewis from about eight yards to put the home side in front.

The home celebrations had hardly died down when they started again as Hearts doubled their lead a couple of minutes later. A poor pass from the highly-rated Dons defender McKenna was seized upon by Kyle Lafferty. His shot on goal was deflected by O’Connor towards Milinkovic who took the ball past keeper Lewis before prodding home.

Aberdeen were showing the more physical aspect of their game and there were some tough challenges going in from some of the men in blue.

A well-worked free-kick from Hearts on the half hour mark almost made it 3-0. Steven Naismith’s delivery found Christophe Berra whose header was well saved by Lewis.

Hearts ended the first half well on top and there were shades of the 4-0 hammering of Celtic just before Christmas in an impressive display from the home team.

One may have expected something of an onslaught from the visitors at the start of the second half, but it didn’t materialise. It was Hearts who looked the likelier side to score again and captain Berra set off on a surging run in the 52nd minute only to see his shot on goal go over the bar.

Dons keeper Lewis then had to be at his best to deny Kyle Lafferty whose shot was pushed over the bar.

Aberdeen substitute Mackay-Steven proved more of a threat than the man he replaced, McGinn, but, again, there was little to trouble Hearts keeper McLaughlin.

Hearts should have put the game to bed with ten minutes to go when a fine pass from John Souttar found Kyle Lafferty, but the Northern Ireland hitman saw his effort saved by Lewis.

The Dons almost pulled a goal back when substitute Rooney’s effort on goal from three yards out hit the post before going wide. It seemed to sum up Aberdeen’s day.

Hearts were comfortable winners at the end and Craig Levein was a happy man after the game. He told the official Hearts website:

“I was really pleased with that performance. I always feel we’ve got a good chance of winning at home. It was quite a strong performance and a fairly emphatic win against a good Aberdeen side. We were worthy winners.

“I was really pleased with the composure in possession. The pitch is getting better, and it was quite slick today. At times I’ve bemoaned our unwillingness to take the ball under pressure but that wasn’t the case today. We were really good at that, particularly in midfield.”

“Steven’s Naismith’s a good player and when he gets into those positions I feel quite comfortable that he’ll score. Likewise, David Milinkovic is always a threat and it was good to have him back today.

“As for Christophe Berra, he’s the best centre back in the league. He does the same thing week in, week out. His performance drop-off is half a percent, which is amazing.

“His consistency helps everybody in the team. He’s been fantastic this season, he really has.”

Hearts have been impressive – as well as unbeaten – since their return to Tynecastle in November. Had they replicated this form on their travels they may well have been in the chasing pack for second place in the league.

Top man: A difficult choice on an afternoon when Hearts had so many fine performers, but Don Cowie stood out for me.