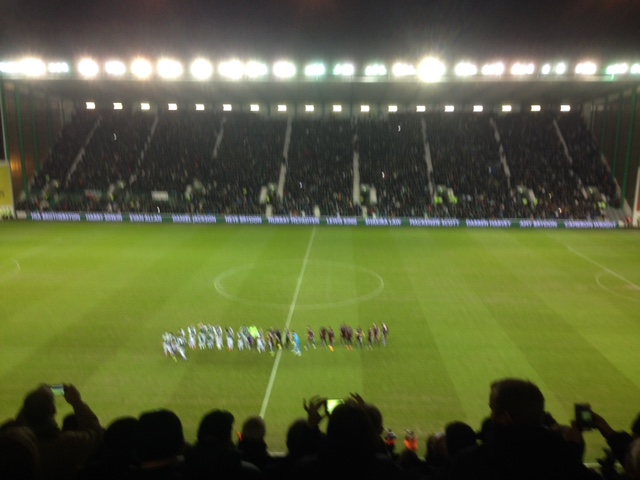 Scott Allan’s superb strike in the Edinburgh derby has been voted the SPFL Goal of the Month award for March 2018.
The on-loan midfielder won 42% of the vote for his left footed effort from 20 yards which gave Hibs the lead against Hearts before a packed Easter Road.
With the score 0-0 Flo Kamberi chipped the ball into the path of Paul Hanlon who did well to feed Allan just outside the penalty area. The midfielder didn’t hesitate and showed fantastic technique to fire the ball low into the bottom corner of the net, leaving the Hearts goalkeeper Jon McGlauchlin stranded, sparking wild celebrations.
Allan retuned to Hibs in the January window and has won the hearts of the supporters with some fine displays. His previous tenure saw him win the Championship player of the season under Alan Stubbs before moving to Celtic.
Watch the goal here.
The short list was as follows:
A – Scott Allan: Hibernian v Hearts
B – Aidan Keena: Queen’s Park v Alloa Athletic
C – Tom Rogic: Rangers v Celtic
D – Matty Smith: Queen of the South v Dundee United
E – Kyle Lafferty: Hearts v Partick Thistle
F – Mark Lamont: Clyde v Montrose
G – Lewis Morgan: St Mirren v Dumbarton
H – Ryan Hardie: Dumbarton v Livingston