Home Culture Letter from Scotland
Share
Facebook
Twitter
Pinterest
WhatsApp
Print
Trust us Celts to have invented Halloween.  It’s said to have grown out of the ancient Celtic festival of Samhain, the end of summer, when the wall between the real world and the spirit world becomes thin and porous.  So our pretence  of being a rational, common-sense sort of people falls away and we become frightened of “ghoulies and ghosties  and things that go bump in the night.”

There is plenty to be frightened about this week. Our first minister went to London to meet the witches and wizards of Downing Street, only to come out saying there was nothing on the table for Brexit. “I don’t know any more now about the UK government approach to the EU negotiations than I did before I went into the meeting,” said a clearly frustrated Nicola Sturgeon.

Theresa May tried to calm provincial nerves by suggesting a regular round-the- cauldron session with the Brexit minister David Davis.  But Ms Sturgeon said that would only satisfy her if Scotland somehow remained part of the single European market.  Otherwise, a second independence referendum would be back on the agenda. And just to underline the point, the SNP government published a draft bill this week to prepare for such a day.

All this talk of Brexit and independence makes me giddy. It’s like looking down into a dark and bottomless crevasse.  Indeed, one of my enduring fears is of falling into one of those fearful crevasses in Antarctica. Not that I have ever been there….. though I did go last week to the Polar Museum in Cambridge and relived the nightmare of Captain Scott’s disastrous journey to the South Pole.

I got back home only to read that a Scottish scientist, Gordon Hamilton, had fallen into a crevasse while driving his vehicle across White Island in the Ross  archipelago.  Dr Hamilton was one of the world’s leading experts on the effect of climate change on the ice sheets in Antarctica.  He was working for the University of Maine but he came originally from the city of Dundee, home of Captain’s Scott’s first ship “Discovery.”

And that wasn’t the only cruel irony of the week. A “Living Planet” report has pointed out that in Dr Hamilton’s lifetime, the world has lost 67 per cent of  its wildlife because of climate change, deforestation, pollution and over-fishing.  Now that is frightening.  Perhaps we humans are next to go.  We are certainly not deterred by this however, as we bravely go ahead with a new runway at Heathrow.

We got another fright this week about the state of the National Health Service. The Auditor General brought out a report which warned that we are simply not carrying out the long-agreed policy of moving from cure to prevention.  Seven of eight NHS key targets are not being met. Hospitals are still struggling to cope with rising demand because of chronic shortages of staff and funding. Meanwhile not enough care is provided at home or in nursing homes to prevent people landing up in expensive hospital beds.  Already “health” consumes 40 per cent of the Scottish government’s budget and costs are set to soar as the number of old people in the population rises.

I have long thought that the answer is to abolish the 14 regional health boards and transfer their funds to local councils who I think would place the emphasis where it needs to be, on care in the community.

Another ghost from the recent past has come back to haunt us this week…fox hunting.  The Scottish Parliament thought it had abolished fox-hunting in 2002 but, according to the police, the law is proving “unworkable”.  It’s true that many traditional hunts and packs of hounds have been disbanded but fox-hunting continues because of a loop-hole in the law.  It allows dogs to flush out foxes, supposedly so that gamekeepers can shoot them “humanely.” But the police say it is “extremely difficult” to have guns in place in time, before the hounds tare the fox apart. There have only been two successful prosecutions in the last 14 years.

In short, it seems this piece of legislation needs to be rethought.  It’s embarrassing because this was one of the first laws the new Scottish Parliament passed. It was supposed to be well researched and evidence led but in fact it turned out to be a town v country argument, both sides driven by passion not policy.

Finally, we cannot let Halloween go by without mentioning its champion, Robert Burns.  He was forever teasing us about our fears of the “other” world, from “Tam O’ Shanter” to “Holy Willie’s Prayer”.   But he also paints a happier picture of the community spirit and human enjoyment we can get out of celebrating the passing of the seasons in “Halloween.”

I wat they did na weary;

And unco tales, an funnie jokes –

Their sports were cheap an’ cheery:

Set a’ their gabs a-steerin’; 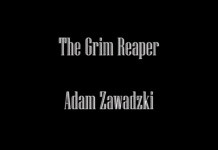 A spooky tale – The Grim Reaper 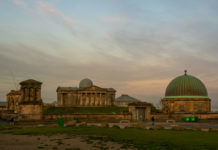