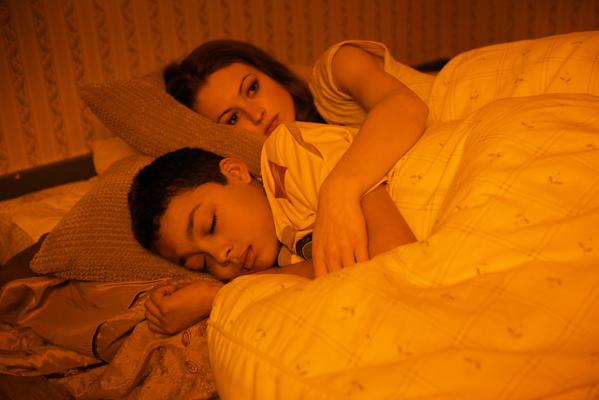 There’s very little I can tell you about The Violators that will make you understand just how clumsy and crass it really is at times. A work of supposed cinematic refreshment, it promises a look into a life we apparently seldom see. The issue? It follows a girl and a family that we’ve seen depicted in cinema many times before – in a stronger, more convincing manner.

It’s been years since Shelly saw her father. After testifying against him in court following a childhood of abuse, she finds herself living with her older brother and caring for her younger step-sibling. Stuck in a depressing, near penniless existence, things take a turn seemingly for the better when she meets a girl from an affluent nearby neighbourhood and a local pawn dealer intent on helping her find a better life.

There is no real focus here. Writer/Director Helen Walsh is known primarily for her work as a novelist. The plot of The Violators needs lyrical, poetic language in order to let its audience appreciate the undeniably twisted, often convoluted stories she has brought to the screen. When there’s no real narrative to guide the way, everything falls triumphantly flat. These cliched characters are painfully overcooked and there’s no direction for them to truly follow; a triumph in itself, considering how many plot pools the story has its toes in.

Perhaps its saving grace is the lovely work of Lauren McQueen. An actress who cut her teeth in television, she has the ability to grab every ounce of your attention. The film near enough follows her and her alone; being the centrical force of every scene. She’s counteracted with some truly cringeworthy work from her supporting cast. Her stalker-slash-best-friend Rachel (played by Brogan Ellis), serves no real purpose for the entire duration of the film. She’s the focus of one of many unnecessary branches the film has.

When it all comes to its overdue, hyper-ridiculous conclusion, we can only draw upon the fact that the past ninety minutes have led to a Coronation Street/Charlie’s Angels surprise crossover that features the sidesplitting, incongruous line: “I’ll take this one.”.

Sadly, a strong central performance is not enough to save just another shoddy addition to the gritty, British council estate drama genre that grows by the day.

The Violators has its world premiere at the Edinburgh International Film Festival 2015. For ticketing information, head to the EIFF website.