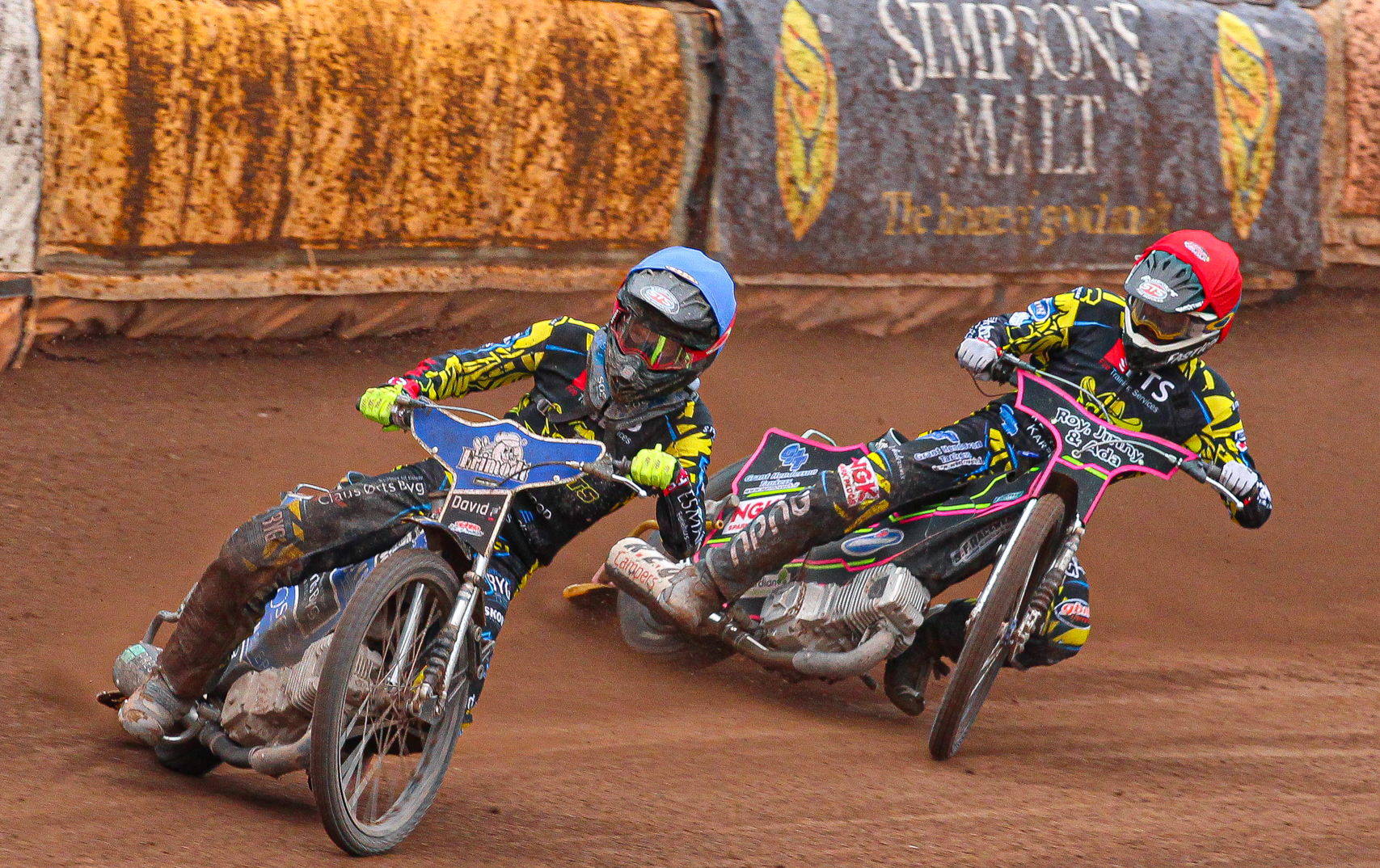 Berwick’s MP has joined the battle to get Danish reserve sensation Jonas Knudsen back on track this weekend, writes George Dodds. International Development Minister Anne-Marie Trevelyan has contacted the Home Office in a bid to speed up the 20-year-old’s work visa.

When the application was made the club was told by United Kingdom Visas and Immigration that it would take up to seven weeks to process, the delay due to government policy to prioritise applications from people trying to escape the war in Ukraine.

In the meantime Knudsen (pictured by Taz Mcdougall with Leon Flint) was able to make his debut for the FTS Bandits, powered by Keenwood Karpets, using a Permitted Paid Engagement Visa. But that ran out on Saturday meaning the missed Berwick’s defeat at Leicester on Sunday.

Promoter and team manager Gary Flint explained: “The seven weeks that UKVI told us it could take to process Jonas’s application ended on Tuesday.

“Anne-Marie Trevelyan instructed her chief of staff to contact the Home Office on our behalf and he was able to get the application advanced for consideration.

“But it still means that we’re waiting with fingers’ crossed, hoping for the best but planning for all eventualities. We have also investigated other lawful ways which would allow Jonas to ride, including asking for a second PPEV.”

Both promotions could be anxiously pacing the airport arrival halls on Saturday morning as Berwick and Glasgow prepare for the penultimate match in the Championship Jubilee League Scottish section.

Along with Knudsen, the Bandits’ Leon Flint, Tigers’ Benjamin Basso and Tom Brennan have been named in the Denmark and Great Britain sides which in the Speedway of Nations 2 Final in Esbjerg on Friday.

All four are then booked to fly to the UK in time to reach Shielfield Park for the 7pm start.

For Glasgow it is the second of three meeting in as many days which will decide who between them and Edinburgh progress to the final of the new competition.

They travel to Armadale on Friday before hosting the Monarchs at Ashfield on Sunday afternoon, having already beaten the Bandits on home shale in the mini-league.

Berwick are looking to halt a run of six home matches without a win, including the six-point Championship loss to the Tigers in May.

Harris, along with teenage team-mate Flint, bids for the British Championship – and a wildcard at the British Grand Prix on 13 August – at Belle Vue on Monday night. Wednesday’s draw means that the Berwick duo will meet – along with Craig Cook and Steve Worrall – in heat one at the National Speedway Stadium.

Flint has already been named, along with Drew Kemp, as track reserve for the big night in Cardiff and the following day’s SGP II where Knudsen and Basso will ride in the 16 along with wildcard Brennan.

It could be a busy weekend for Flint who is in competition with Jye Etheridge to partner Harris’ in the Championship Pairs at Oxford the night before the Cardiff Grand Prix.

Selection criteria for the pairs is any two of a club’s top three riders and in the latest green sheet averages – which come into operation next Monday – Flint’s figure of 6.72 puts him behind Harris, 9.31, and Etheridge, 6.78: Ricky Wells, 5.95, and Theo Pijper, 5.18, rounding out the top five with reserves Knudsen and Nathan Stoneman on assessed averages of five and two, respectively.

“Despite the switch to number five and the added pressure of riding in heats 11 and 13 which comes with it, Leon’s progress has been heartening during a run of disappointing results in general,” team manager Gary Flint said.

“He has also become Chris Harris’ regular partner in heat 15 home and away – including when we won at Oxford earlier this month.

“Leon’s also scoring freely in Sweden for Valsarna, for Wolverhampton in the Premiership  and, of course, his Under-19 title and the manner in which he won it, has put him on everyone’s radar.

“But we will make the final decision on the Pairs next week.”

Berwick’s winless streak at Shielfield stretches back to April – a draw with Poole the only break in a string of defeats – including a six-point loss to the Tigers in May, an evening when the Bandits, already using rider replacement for Etheridge, were further hampered after Ty Proctor aggravated a neck injury in a heat two fall.

Despite riding on that night, it turned out to be Proctor’s last appearance in a brief Berwick career, former World 250CC champion Knudsen eventually replacing him in a double switch which also saw Nathan Stoneman replace Kyle Bickley.

Harris and Flint scored 27 or Berwick’s 42 points that night and will be looking for more support this weekend if the Tigers are to be tamed.

Tapes-up at 7pm with tickets available from the Berwick website, including free admission for children when booked in advance.

The annual track collection for the Speedway Riders’ Benevolent Fund – a charity which helps injured riders and their families – will also be held on Saturday.