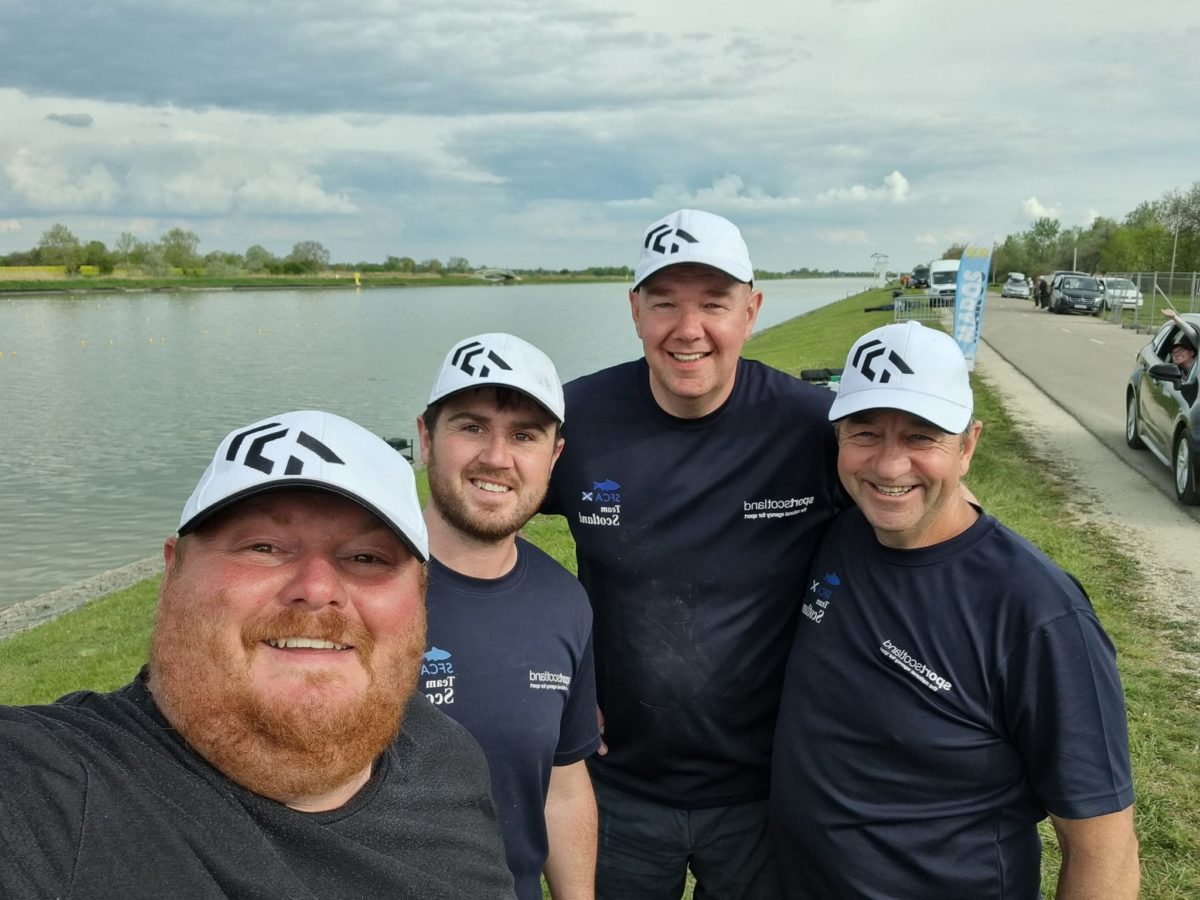 Two Edinbugh-based anglers, James Dornom from Currie and Davie Corcoran from Davidson’s Mains, have just returned from the WalterLand Masters in Hungary, featuring “world-class” anglers.
The quartet, which also included James Woodrow from near Cumbernauld and Gus Brindle from Dunfermline, the chairman of the Scottish Federation for Coarse Angling, finished 37th out of 43 teams and Woodrow admitted it was a tough three days, but he can’t wait  to go back to the annual venue in Szeged.
The car mechanic said: “It was a truly awesome event on what must be the best venue in Europe and it was incredibly well-run. Yes, it was a long drive home – two days – but I am already looking forward to returning.”
Woodrow had a “mega” third day, incidentally, catching over 23kg of carp and he was second in his section behind English angler James Dent who weighed in over 25kg.
Products now, and Daiwa UK based in Wishaw, Lanarkshire, have launched a Matchman three-piece pellet waggler rod with lengths from 10ft to 13ft and two-piece method feeder rods from 9ft to 12ft starting at £44.99. Angling Times said of the 9ft feeder: “You won’t find anything better than this.”
On to sea fishing and the Bass Rock Shore Angling League have presented the Royal National Lifeboat Institution with a cheque for over £200 raised from donations and also money raised from an open competition.
The club have started their ten-match summer league after the first heat was postponed because of the conditions at Bellhaven Beach which organiser James Ogilvie said was unfishable
Eyemouth-based Aquamarine Charters are back in operation after a boat refit and anglers have already enjoyed a good run of cod. Spaces are available at weekends. Ring Derek Anderson on 07860 804316.
Fly fishing now and Ross Carnegie won the first heat of the Kingdom Fly Championship at Stenhouse with a weight of 30lb 2oz. He pocketed £75 in vouchers from Snowbee and a Scierra floating fly line.
Second was Alan Martin with 28lb 10oz and third Scott Mudie only three ounces behind with Shaun Halleron fourth on 27lb 2oz and Allan McLachlan fifth on 24lb 13oz.
Darren Barcik tempted the biggest fish of the day at 3lb 8oz and he won £50 in vouchers from Snowbee and the only female competitor, Nicola Carnegie, weighed-in with 15lb 6oz.
Phally Cowan, who won the recent Scierra Pairs event at the lake, totalled 8lb 7oz and 175 fish were caught during a day in which the last few hours saw a large number of fish caught at the Kirkcaldy end of the loch in the  shallower water. Two other heats are planned at Eden Springs on Sunday, May 22 and Ballo Reservoir on Saturday, June 11.
Elsewhere, The Black Loch near Falkirk reports that 52 rods were out, 78 fish  were kept and 204 returned. Favourite fly patterns included buzzer, cormorant, damsel and diawl bachs.
Dry flies are also producing with floating lines, midge tip and Di3 lines favoured. Among clubs who visited this week, Aberdour Angling Cub killed 62 and returned 12, Heriots returned 55.
At Bowden Springs, Linlithgow, Paul Dancer tempted ten to black app during a session and James Mollon hooked into an 8lb rainbow and 6lb blue on yellow dancer while Billy Wilson had eight with a best of 8lb on buzzer.
Evening fishing started this week at the Lake of Menteith and and it is buzzertastic according to manager Quint Glen with the water fishing at its best so far this season. Boat catches in the 30s are fairly common, he said, and Alec Rennie’s boat had 49 plus a roach, two perch and a pike all on buzzers, straight lining and Scott Caven 18 on dry flies. Stewart Inglis netted 37 and his nephew had 16. Inglis said: “It was the best buzzer fishing I have ever had.”
Allandale Tarn near West Calder report superb sport with the mild, overcast weather keeping the fish feeding all day. Dry flies and various nymphs have been consistent catchers along with white squirmy with anglers netting 20-plus fish in their sessions. Owner Iona Allan is busy tying more white squirmy for anglers eager to join in the fun.
Harlaw head bailiff Steven Oliver reports excellent fishing with buzzer, black lures, FAB, Montana and boobies all producing with slow retrieve proving profitable and he said the fish  seem to be in the top few feet. Robert Ross, company secretary of Malleny Angling, had 12 in midweek.
Loganlea has produced good sport and Rosslynlee near Penicuik has been busy and so has Tweeddale near Gifford where owner John Jackson re-stocked ahead of the Bank Holiday weekend. Anglers have been rewarded with Eggstacy patterns with two legs producing good bags.