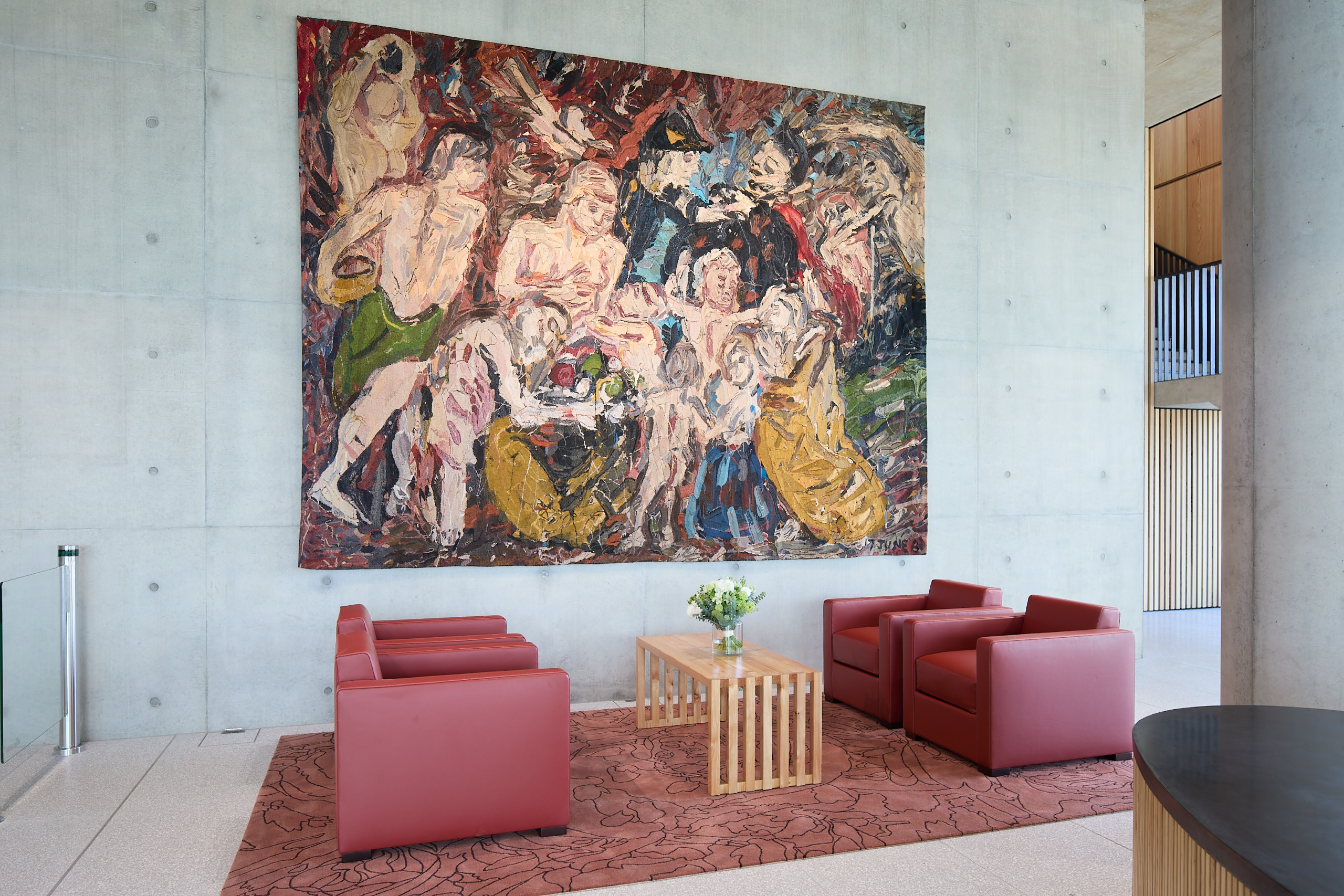 A major new piece of public artwork in the form of a tapestry by Dovecot Studios has just been unveiled in 1 New Park Square, a recently completed office building in Edinburgh Park.

Commissioned by Parabola, the property company that is developing the southern phase of Edinburgh Park, the unique tapestry is twelve square metres and was handwoven over sixteen months by five of Dovecot’s weavers.

It is inspired by Leon Kossof’s painting ‘Minerva Protects Pax from Mars’, which is a highly charged anti-war composition in which Minerva, the Roman goddess of wisdom, helps to drive away Mars, the god of war. The painting was given to Charles I as an anti-war offering from the Spanish Crown.

The commission for Edinburgh Park is the first time a work by the expressionist artist has been translated into tapestry, and it is also the first new public artwork in a decade for Edinburgh by Dovecot, a leading tapestry studio and a centre for contemporary art, craft and design based in Edinburgh’s Old Town. Founded in 1912, Dovecot has created tapestries with some of the UK’s leading artists and architects.

In addition to the newly unveiled tapestry, Edinburgh Park now has a trail of world-class sculpture, and Parabola is working closely with photographers and poets-in-residence to document the project as it unfolds.

Parabola’s Chairman Peter Millican (photographed below) said: “Parabola has a strong commitment to cultural engagement with Edinburgh’s artists and cultural institutions. It complements our major sculpture programme and provides opportunities for young and emerging Scottish-based artists. This collaboration with Dovecot has been an absolute pleasure to see come to fruition.

“The tapestry is now on display in the reception of 1 New Park Square, our recently completed Grade A office building in Edinburgh Park. With its beautiful high ceilings, large scale glazing for natural light and sensitive use of concrete and soft furnishings, the reception is a fitting home for such an important piece of public art.

“In addition to the tapestry, new pieces of sculpture by William Tucker and others have been commissioned for the Park and, together with established pieces such as Sir Eduardo Paolozzi’s Vulcan, will create a unique art trail for all to enjoy.”

Celia Joicey, Director at Dovecot Studios, added: “At a time when leading artists worldwide are making work in textile, this commission has the power to connect a new audience to Leon Kossoff’s legacy. We hope it will also engage everyone living and working in Edinburgh Park with the opportunities to create art in the city.”