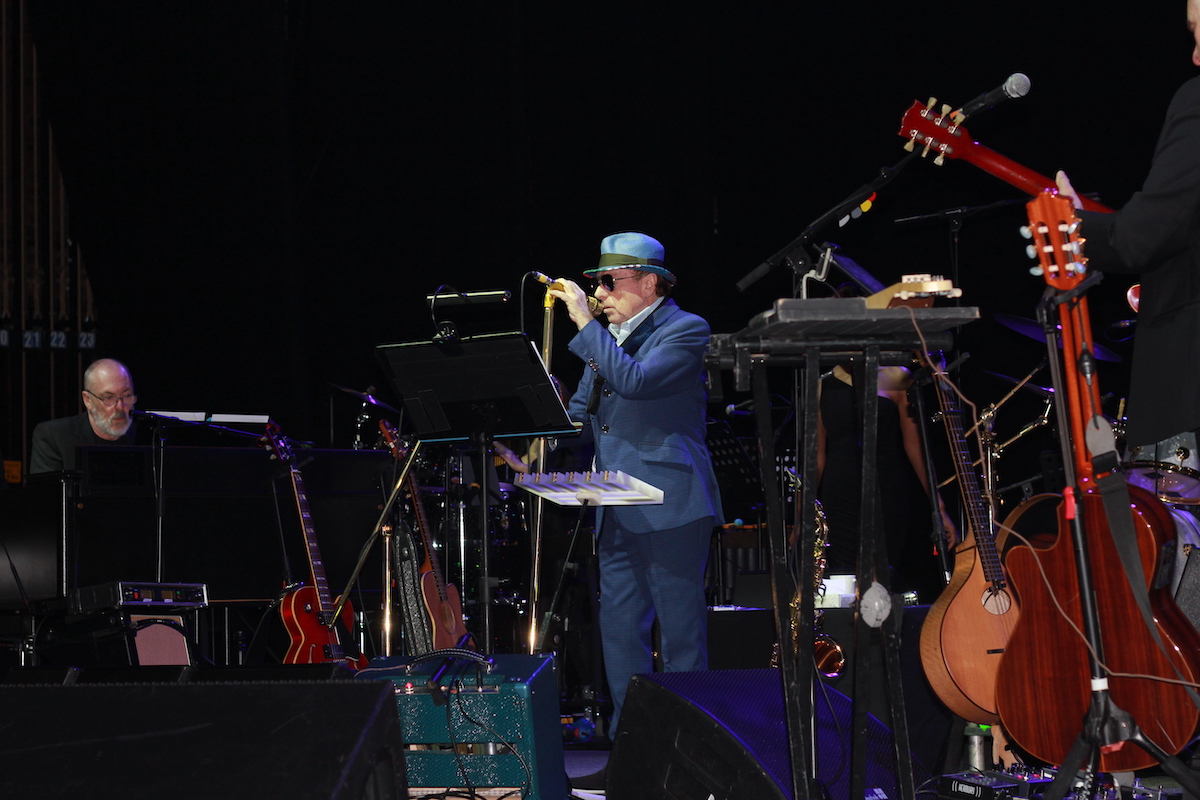 I have been out and about in Edinburgh in the last few weeks, enjoying live music and also a play at the King’s. Here is my round up:

Van the Man returns to the Edinburgh Playhouse for a solid set that lifted the spirits. The output of Ireland’s greatest living songwriter has been prolific since turning 70 and is showing no sign of slowing down with his 43rd long-player, What’s It Gonna Take, being released in May.

Celtic Swing featuring Morrison on sax is an easy-listening opener and an uncomplicated way into the set. The title track of his lock-down release Latest Record Project and Deadbeat Saturday Night also from the 2021 album go down well with the receptive capital fanbase.

The audience is treated to some classic gems including Days Like This and Someone Like You. When Van’s voice soars it’s like transmissions from another world and his backing musicians are reliably brilliant as ever. And It Stoned Me from his 1970 album Moondance is played for the first time in 12 years and it’s undoubtedly worth the wait.

The atmosphere and band are cooking by the time we get to Them’s Baby Please Don’t Go spliced with Bo Diddley’s Got My Mojo Working I Can Tell. Brown Eyed Girl is a crowdpleaser moment followed by the ragged glory of another theme classic, Gloria.

The Belfast Cowboy exits the stage early leaving his band to work the crowd for a transformative finale. Morrison’s Celtic vision of jazz, blues and rock n’ roll over many decades continues to amaze.

It’s fair to say that Edinburgh audiences are being cautious at the moment and understandably so. With venues far from sold-out and tours being cancelled the pandemic is still affecting our lives. Imelda May drew a passionate audience inspired by tracks from her excellent sixth album 11 Past The Hour.

Before Imelda took the stage we were treated to an enchanting collection of songs by Brooklyn based singer/songwriter, Rachel Sage. Switching between piano and an eye-catching beautiful blue Gretch guitar along with Kelly Halloran on violin the pair made an enchanting sound. 11 Past the Hour is a bewitching opener from May which immediately made a connection. The Dublin born singer had a spellbinding stage presence during Levitate and Black Tears both from her excellent 2017 album Life Love Flesh Blood.

May delivered a stunning performance in the city at the Usher Hall back in 2017. Tonight is a more scaled-back affair but no less potent. Deep cuts such as Breathe and Sixth Sense all add subtle textures to the mood before a rocking second half. The likes of Big Bad Handsome Man and Johnny Got A Boom Boom bring an appropriate Saturday night energy, but it was a heartfelt tribute to Meatloaf on I’d Do Anything for Love (But I Won’t Do That) that packed an emotional punch.

The vocal Edinburgh crowd lapped up every minute before spilling out into Saturday night.

It was a moment I’ll never forget, seeing the original Orphans film at the Edinburgh International Film Festival back in 1998. The film came from a decade that produced a flourish of Catholic stories emerging from Scotland. It’s a modern problem, how do you bring a classic film to life without treading the same ground?

Peter Mullan’s black comedy works better on film than it does in this stage production by the National Theatre of Scotland.

The closest we get is Robert Florence’s excellent performance as Thomas, he’s a brilliant comic actor with flawless timing but too often we lose the important tender side of the character’s deep Catholic beliefs which are used only for laughs. He’s a textbook martyr but unlike the film, the satire of his faith felt a little clumsy and overdone.

More needed to be made of the toxic relationship between John (Dylan Wood) and Tanga (Harry Ward) to flesh out the drama which felt strangely subdued compared to what Stephen McCole and Frank Gallagher brought to the original movie script. Amy Conachan delivered an excellent performance as Sheila, it’s her meeting with Bella (Amber Sylvia Edwards) that draws out her character and gives some context to the wider story.

The National Theatre produced a stage version of Andrew O’ Hagan’s 1994 book The Missing back in 2011,and the Catholic nuances in O’Hagan’s work were an influence on Mullen’s film but those felt less visible here. That stage version left enough space for a different kind of experience from the book, too often this production of Orphans felt like there were scenes from the film being re-created for the stage that just didn’t offer anything different from the original film.

In truth, something was lost, a bit of Mullan’s grit behind the fingernails as well the film’s original Joycean magic.