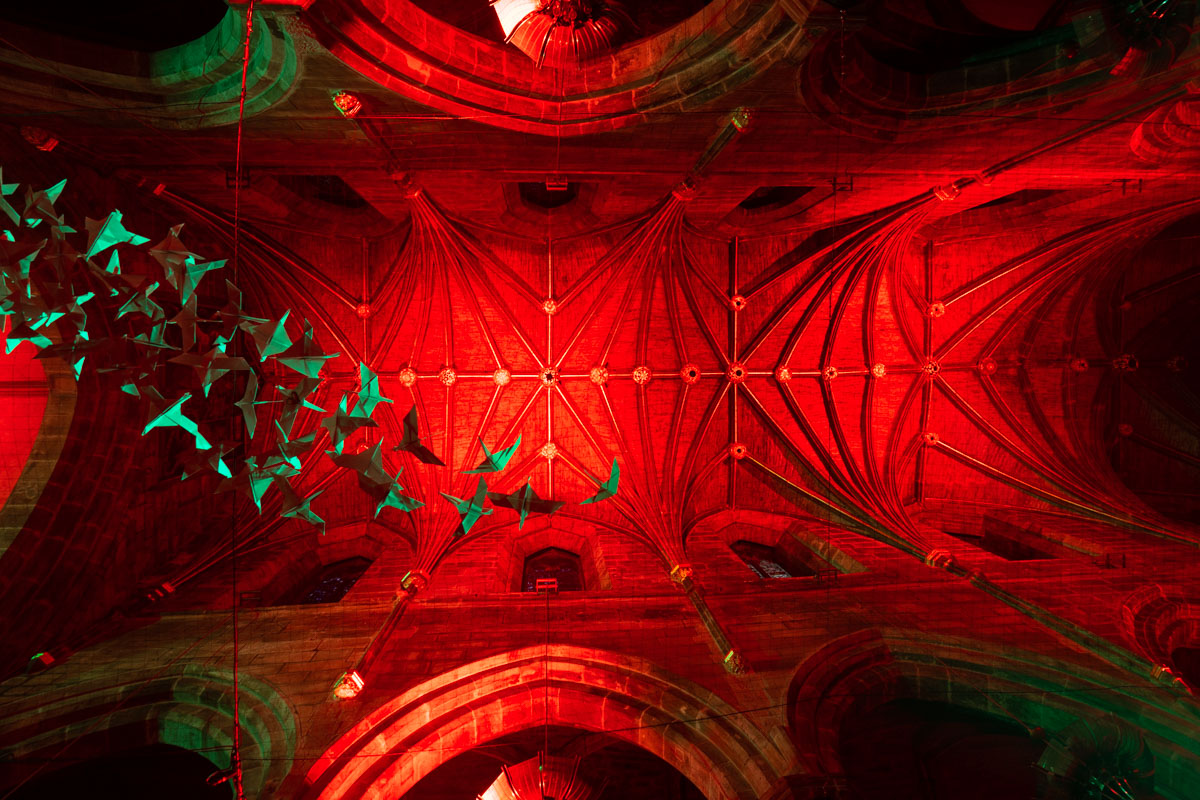 An installation created by artist Michael Pendry and it will be in place at St Giles Cathedral from Saturday 26 March until 7 April 2022.

Les Colombes consists of a floating flock of more than 2,000 white paper doves which have been hung above the nave in the cathedral, each folded paper bird bringing a message of hope, peace, humanity and new beginnings with it. The doves were made by those visiting the cathedral and the National Museum of Scotland during the past two months.

This installation is part of the Burns&Beyond event which was sadly postponed from January this year. It has been displayed in Salisbury and London but this is only the third time it will be on display in the UK. The artwork is accompanied by a specially commissioned soundscape and there will be a number of musical performances with the St Giles’ Cathedral Choir, Brìghde Chaimbeul with Aidan O’Rourke, and Rachel Newton.

Michael Pendry said: “Folded by different people, the Doves in their unity stand for such a fundamental human right. The time has come to admonish and to stand up for this – for the right to Peace and Freedom! So that the swarm of Doves might grow, from place to place, from country to country, across all borders.  Les Colombes has found a home in some of the world’s most sacred spaces, and now I’m thrilled to exhibit this piece in Edinburgh’s St Giles’ Cathedral, where it can challenge and engage new audiences.”

Rev Calum I MacLeod, Minister, St. Giles’ Cathedral, said “Doves are symbols of hope and peace in the Christian tradition and are seen as a sign of the Holy Spirit of God. I am delighted we are partnering with Burns&Beyond and Michael Pendry to welcome this installation to St. Giles’ Cathedral. I am reminded that St. Columba, who brought Christianity to these shores, was known as ’the dove of the church – Columcille.’ There are two stained glass windows depicting him in the cathedral. In these days of turmoil and violence in our world I hope ‘Les Colombes’ give hope of peace.”

On Thursday 31 March, the Choir of St Giles’ Cathedral along with organist Jordan English will perform choral music on the themes of peace, hope and reconciliation featuring music by Mendelssohn, Fauré, Elgar, MacMillan and Esenvalds curated and produced by Michael Harris, Master of the Music.  Unique Events will be donating all profits from the Wings of Peace concert to the Disasters Emergency Committee (DEC) and fundraising throughout the installation, to raise much needed funds to help all those in Ukraine affected by the current conflict.

On Friday 1 April, Brìghde Chaimbeul, winner of the BBC Radio 2 Folk Horizon Award 2019, is joined by Lau’s Aidan O’Rourke.  Working closely together they have devised a completely new way of arranging pipe music that emphasises the rich textural drones of the small pipes.  On Saturday 2 April, singer and harpist Rachel Newton gives a special solo-acoustic performance.  Rachel’s music draws on poems and ballads that are hundreds of years old, working them into her contemporary style to create a rich sound.  Tickets to all the musical evenings are available from burnsandbeyond.com

Michael works as a designer and artist in both countries, where he also studied interior design, stage and set design at the FH Rosenheim and, for several projects, at the art academy in Munich. Pendry is driven by his desire to reach out to those people who do not normally visit cultural venues.

Among countless other installations over the years ‘Das apokalyptische Weib’ for the Long-Night-of Museums in 2006 and the light and video installations ‘Sacre Coeur’ and ‘Störung’ (Disturbance) have been some of the highlights in the career of this multimedia artist to date and showed his great innovative talent in finding new means of multimedia expression and catching the interest of thousands of people. Lighting the rotor blades of a nearly 100 m high wind wheel just outside Munich in 2010 with ‘Star of the South’ was definitely one of his most ambitious projects. Two of his latest installations, ‘LES COLOMBES’ and ‘URBAN PARADISE’, have become popular successes.

Burns&Beyond is produced by Unique Events and supported by The City of Edinburgh Council and Essential Edinburgh. 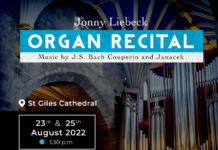 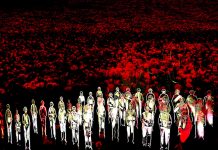 At St Giles in November – Unknown 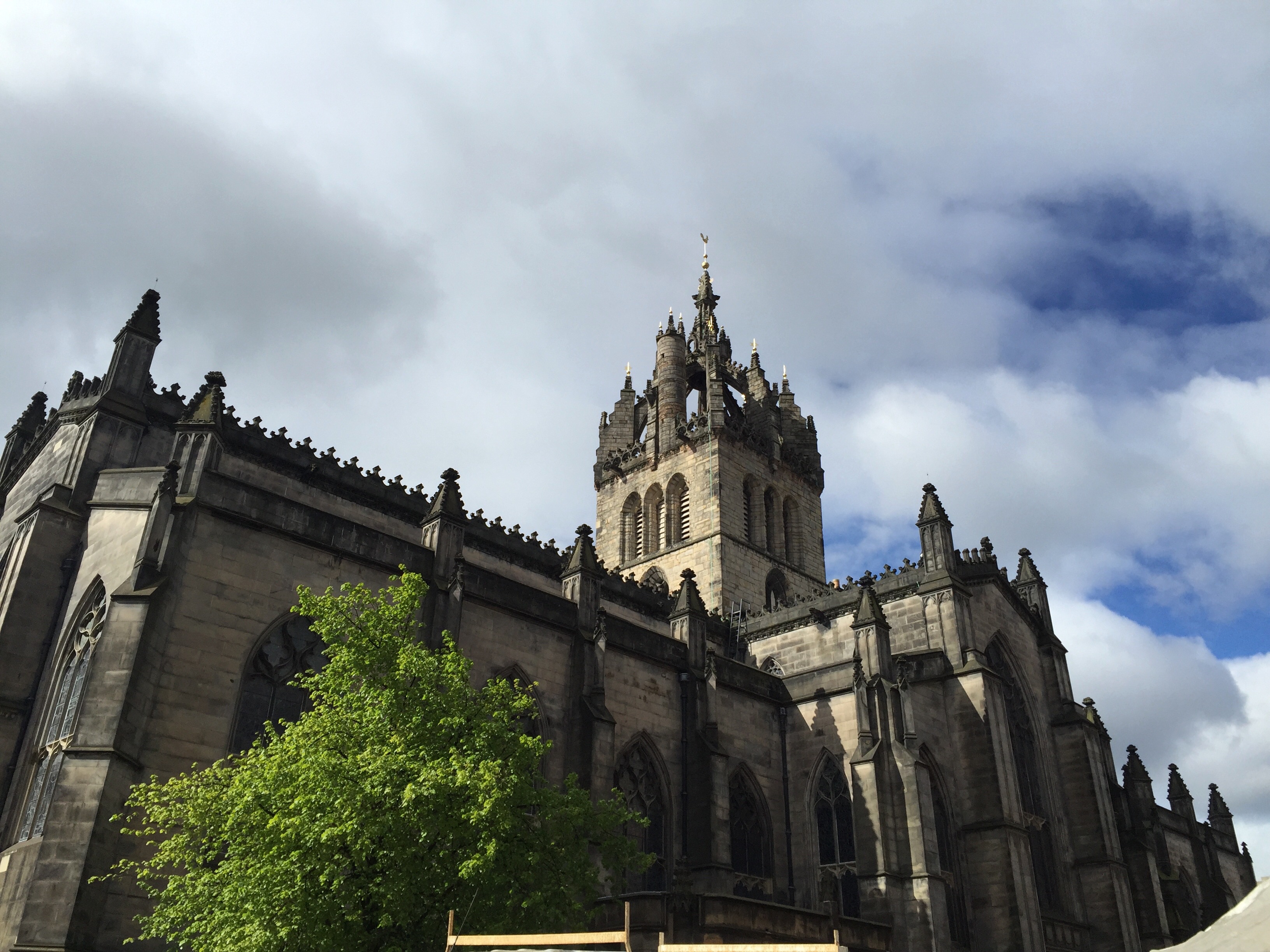