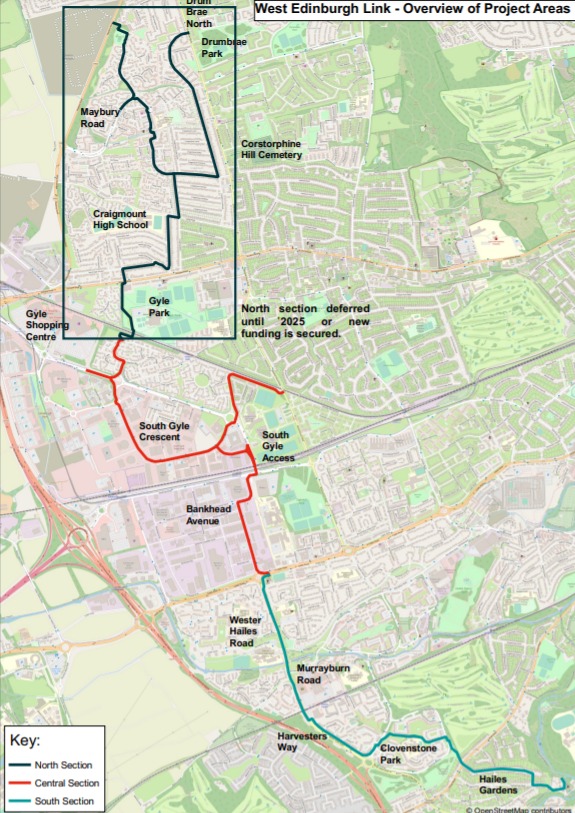 The Council has agreed to issue Compulsory Purchase Orders for several plots of land in West Edinburgh as part a new active travel route.

It comes five years after the WEL was announced as one of the winners of Sustrans Scotland’s 2017 Community Links PLUS competition, which is now known as Places for Everyone.

The City of Edinburgh Council says the scheme – which has been costed at just under £20 million – will “transform the quality of cycling, walking, public spaces and accessibility for all within and around one of Scotland’s key business parks”.

However, before work can begin on the first of three construction phases, the local authority is to progress Compulsory Purchase Orders (CPOs) of 15 privately owned sections of land needed for the link.

A CPO is a legal mechanism used by local authorities and other bodies to purchase land without permission from the owner. These are small parcels of land needed to allow the route to be formed.

The council said all landowners have been contacted on at least two occasions, adding that discussions so far have been “largely positive”.

However, it added: “CPO action requires to be commenced now to ensure that titles can be timeously acquired to ensure the contractual programme is not delayed. The CPO will only be implemented if title or access has not been able to be acquired by agreement, to maintain both funding and construction programmes.”

The Transport and Environment Committee met on Thursday to approve the CPOs.

Conservative councillor Iain Whyte, who withdrew an amendment which labelled CPOs as “time consuming, bureaucratic, draconian and expensive” and urged members to reject the proposals, asked: “What real justification do we have for going to the full length of the Compulsory Purchase Order which is quite a heavy handed way of getting hold of this land?”

Peter Watton, the council’s Service Director of Sustainable Development, replied: “It’s to prevent a situation whereby at the eleventh hour a land owner turns round and says ‘I’m going to sell it but I want half a million for that slither of land that you need need for this scheme.’

“They might be willing sellers, but that doesn’t mean to say they’re going to reasonable in terms of what they want in terms of compensation from the council,” he added.

Cllr Whyte also questioned why it had taken five years to fully prepare the proposals, adding that the scheme is “a long way behind”.

Mr Watton said: “We have tried everything we can to acquire the land on a voluntary basis. It is a last resort but if we don’t start the process, there’s a lot of objections, it could be lengthy but I feel that the risk of not promoting it, or starting to promote it, would be significantly more in terms of timescales than not proceeding to promote it.”

The committee voted in favour of pursuing the CPOs.

The WEL will be completed in three phases, with the central and southern sections being constructed first. The purchase orders agreed by councillors this week cover only the two initial sections and the council says further CPOs will be required for the third and final phase which it expects will be built around 2026.