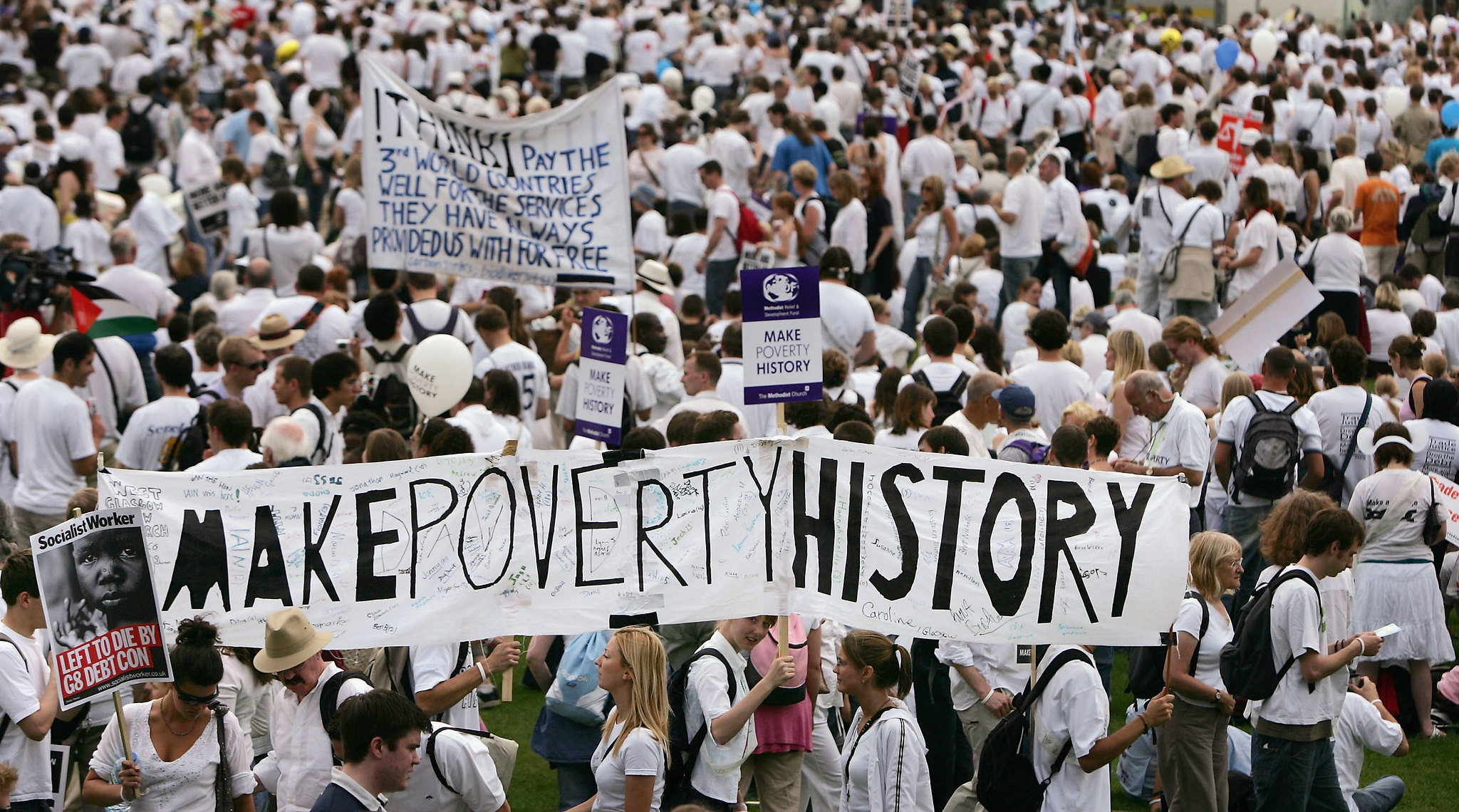 The last time Scotland played host to a gathering of world leaders, 200,000 of us turned out to insist that they fulfil their promise to “Make poverty history.”

That was at the G8 summit at Gleneagles in July 2005. Ten years later they had reached at least one of their goals, the number of people living in extreme poverty had been halved from 2 billion to less than 1 billion.

I wonder if the same will happen at the climate change summit in Glasgow next month. Will 200,000 people turn out? Will the political leaders fulfil their promise to cut carbon emissions enough to stop the world overheating? They could tackle this latest emergency if they really wanted to, as the G8 summit and the Covid emergency have shown.

On the issue of poverty, what the leaders at Gleneagles did not envisage was that they would fail to make poverty history in their own countries. But the latest official figures show that 22 per cent of people in Britain still live in relative poverty, that is, living on less than 60 per cent of the average wage. That translates into 260,000 children in Scotland living in households with an income of less than £450 a week or £17,000 a year (after housing costs). And 16,000 of those live in Edinburgh.

What such existence means was brought home to me by this week’s cut in the Universal Credit welfare payment. The extra £20 a week to help families through the Covid emergency is being ended, to squeals of pain from children’s organisations. They say another 22,000 children will be pushed into poverty. Families, they say, are being forced to choose between eating and heating.  And 60 per cent of these households have at least one parent in work.

Nicola Sturgeon has joined with other First Ministers in Wales and Northern Ireland to condemn the UK Government for “taking the food out of the mouths of children”. She said it was “morally indefensible”.

Boris Johnson says the extra £20 a week was only supposed to be a temporary measure. It was costing £6 billion a year and it was subsidizing low-wage employers.  He used his speech at the Conservative Party Conference in Manchester to outline his vision of a “high-wage, high-skilled, high-productivity, and therefore a low-tax economy”.

The trouble is he didn’t say how we would get to this promised land, other than “it will take time and sometimes it will be difficult”. Right now, it looks very difficult indeed. The “Brexit bonus” has not materialised, energy prices are rising inexorably, we’re facing a winter of discontent from low-paid workers, there’s a skills shortage in health, transport, agriculture and hospitality. National insurance contributions are rising, and the Chancellor is drawing in the purse strings and talking of “recovery coming with a cost.”

You can imagine that none of this Johnsonian economics goes down well in Scotland.  In fact the Minister for the Union (Boris’s Saturday job) hardly mentioned Scotland in his big speech. And it didn’t improve his standing in Scotland when it came at the same time as the UK Government won a court ruling that The Scottish Parliament does not have the competency to incorporate the UN Convention on Human Rights into Scots Law.

You would think this would be uncontroversial but the UK Government decided it would be useful to do a bit of legal nit-picking perhaps to make the point that when The Scottish Government tries to go ahead with a second independence referendum, it will be challenged in the courts and ruled illegal. Boris’ “take back our sovereignty” only applies to Westminster, apparently, and not to the parliaments of the other nations in the United Kingdom.

But to our more immediate problem – Covid.  It’s continuing to cause a high number of deaths, 141 in the week to Sunday, taking us through the 11,000 barrier.  But case numbers are falling and it’s hoped this will lead to less pressure on the NHS.  This week the police told us they’ve had to take at least 30 patients to hospital in recent weeks because the ambulance service is overwhelmed.

As a sign of the winter of discontent mentioned above, two railway unions are threatening strike action during the climate change conference in Glasgow in a long-running dispute over pay.  Engineers and train staff are to stage a series of 24-hour strikes in the first few weeks of November to put pressure on the Dutch rail operator Abellio to make a better offer. There’s already been disruption to train services on Sundays and, despite efforts by the government to bring the two sides together, there’s still a game of brinkmanship going on which everyone hopes will be over by the time the 20,000 delegates to the COP26 conference arrive.

Finally, we are celebrating the latest Scot to win a Nobel Prize.  He’s David MacMillan from North Lanarkshire who did his first studies in chemistry at Glasgow University and has gone on to be a professor at Princeton University in America.  He and a German colleague Benjamin List have been awarded the Nobel Prize for their work on “asymmetric organocatalysis” which, apparently, is a new way of building molecules and is a breakthrough in developing new medicines.

Professor MacMillan has not forgotten his Scottish roots. He declared himself to be a huge football fan and will be watching Scotland’s World Cup game against Israel this weekend. Let’s hope he brings some asymmetric chemistry to the game which allows Scotland to win.