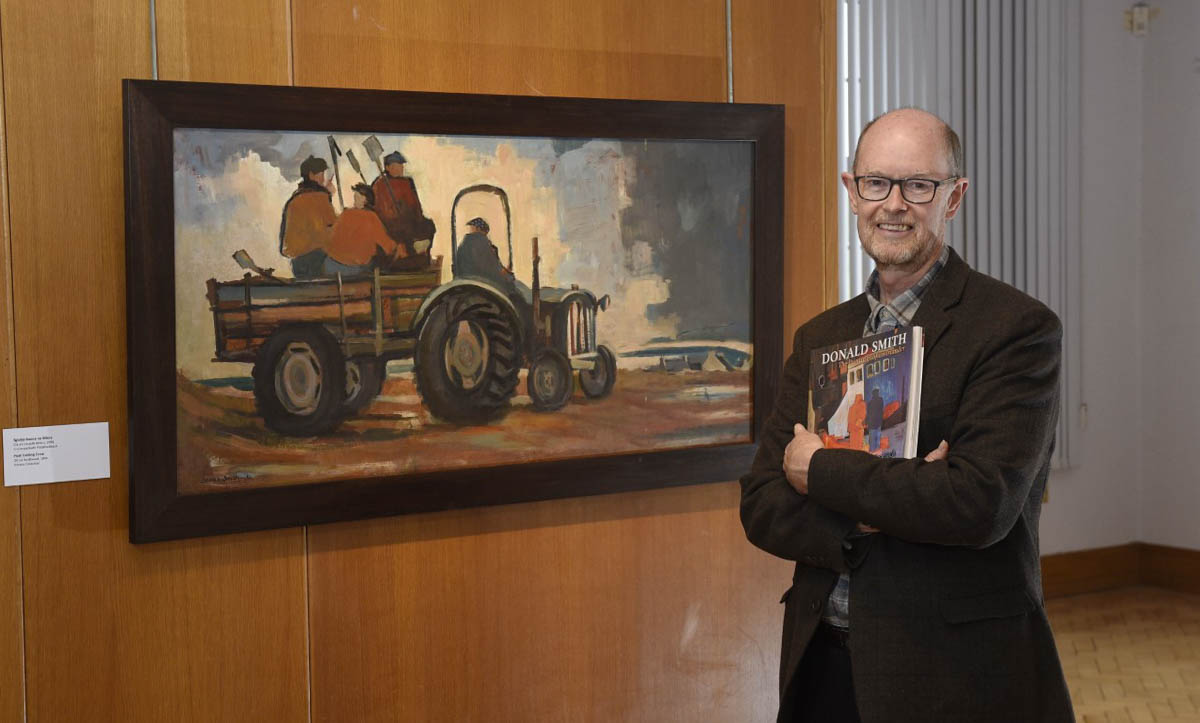 The City Art Centre and Ann Lanntair, Stornoway will, this summer,present, Eileanach: Na dealbhan aig Dòmhnall Mac a’ Ghobhainn / Islander: The Paintings of Donald Smith. Running from 29 May to 26 September 2021, this landmark display, part of the Edinburgh Art Festival 2021, is the first major retrospective of the work of Scottish artist Donald Smith (1926-2014).

Born in rural Lewis in 1926, Donald John Smith was, as Gray’s School of Art Principal Ian Fleming wrote in 1958 – ‘the outstanding student of his year … unquestionably a man of great ability as an artist’. His painting acknowledged movements in Europe and America but remained resolutely local in its subject matter. From his studio on the west side of Lewis where he worked from 1974 to his death in 2014, his intense, lyrical images of island fishermen and women celebrate their indomitable human spirit.

In 2011, five of Donald Smith’s ambitious paintings of Stornoway harbour were exhibited at the City Art Centre in ‘Window to the West’, an examination of the relationship between the visual arts and Gaelic language and culture. In the accompanying catalogue, Professor Murdo Macdonald suggested that a full evaluation of Donald Smith’s prolific and focused work was overdue. This exhibition, a partnership project between the City Art Centre and An Lanntair Gallery in Stornoway, is part of that process.

Councillor Donald Wilson, Edinburgh’s Convener of Culture and Communities said: “I’m delighted that the City Art Centre is able to showcase this fantastic exhibition of the rarely seen works of Donald Smith. “Islander” will allow visitors to discover the man behind the works celebrating the power of the human spirit.”

Councillor Amy McNeese-Mechan, Edinburgh’s Vice Convener of Culture and Communities said: “This is a really exciting opportunity to showcase a Scottish artist whose work will be new to many people. It’s been fantastic to welcome our visitors back to the centre and this is another great exhibition for them to explore.”

Curator David Patterson said: “The City Art Centre has made a deliberate attempt in recent years to showcase Scottish artists who have largely been overlooked in the story of Scottish art. We are therefore delighted to be partnering with An Lanntair in Stornoway to shine the spotlight on another unheralded painter. Donald Smith may not be well known by many, but hopefully this exhibition will go some way to rectify this and draw attention to a unique talent.”

Donald Smith was uniquely placed to connect the Gaelic world of the West with the English-speaking mainstream. He left the island to study at Gray’s School of Art in Aberdeen, continuing to live and work in Aberdeenshire until his return to the island in 1974.

While working as a portrait painter and teacher, Smith developed a structured, contemporary approach to painting. Being one of a number of post-war Scottish artists responding to swift social and cultural change, he saw himself as an outward looking Gael, with one foot in the culture of mainland Scotland, and one in the Hebrides. As a teacher he was dedicated and inspiring.

“…it was Donald Smith who guided our first steps and when, decades later I saw his paintings, I was delighted that they more than measured up to the man and the impression he had made on my younger self.” Arthur Watson PPRSA

Based in a crofting community on the West Side of Lewis from 1974 to his death in 2014, alongside extensive local commitments including teaching, crofting, grazings committee and community council, a steady flow of portraits, large oil panels and works on paper emerged from his studio. Island fishermen and women were transformed into iconic images of working people. Working from many hundreds of drawings and photographs, balancing the competing demands of three-dimensional space and painted surface, these are intensely lyrical paintings, celebrating the indomitability of the human spirit.

The writer and educationalist R F Mackenzie, visiting Bragar in the late 1980s found “….an artist struggling to present how he sees the earthly sojourn of fishermen, big hands deftly mending nets, a grey hard life, and the primary colours of their boats and the magnificent variety of their tackle and trim, the expression on their faces like those of the Rodel tombs and the ancient Chessmen.”

The work of Donald Smith has been exhibited at the Royal Scottish Academy, the Society of Scottish Artists, Aberdeen Artists, and many other locations. In 2019 An Lanntair staged a major display of his work to great local acclaim, although sadly a wider tour had to be curtailed due to the pandemic. He is represented in public collections including the Nuffield Foundation, the BBC, and Art for Hospitals, with many works held in private collections. This exhibition celebrates the work of Donald Smith and attempts to address the evaluation that Professor Macdonald sought.

The exhibition is accompanied by a varied programme of public events and activities, including tours, lectures and creative workshops. All events must be booked in advance. To book please visit www.edinburghmuseums.org.uk

In keeping with Government advice in order to protect and maintain the safety of our visitors and staff, the City Art Centre has introduced a range of new safety measures and procedures throughout the venue, including a one way system, installation of screens at reception, hand sanitiser stations, extra barriers and signage and staff will of course be wearing coverings while offering visitors a very warm, socially distanced welcome.

Visitors are asked to wear face coverings and to pre-book free tickets for allocated time slots in advance via edinburghmuseums.org.uk

Islander: the Paintings of Donald Smith opens on Saturday 29th May 2020, and runs until Sunday 26th September. Admission is free, pre-booking essential