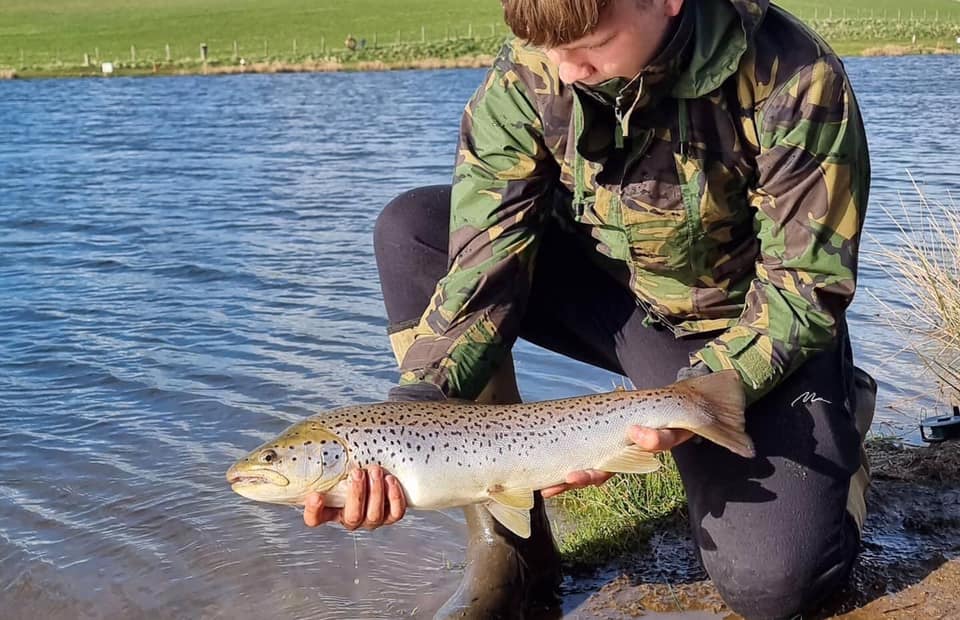 John Jackson hosts an evening competition on Friday, May 21, at Tweeddale Millennium and it was fully-booked in 90 minutes.
Entrants kill the first two fish and the angler with the most fish wins £100. The runner-up gets £75 and third £50 and the fishermen landing the two heaviest fish receive £50 and a bottle of whisky each.
Recently, Calvin Kay (pictured) enjoyed his day at the popular water with a cracking brown trout of an estimated 12lb and Colin Rushford had 14 to the net including a personal best of 11lb 2oz on a cat’s whisker.
Jackson said: “We’ve had weed cut and the water is fishing out of its skin, despite the weather. One day it is black and silver buzzers, the next black and yellow and then black and red. Other days it is diawl bach or yellow dancer patterns.”
He added: “The weather is changeable. On Wednesday this week we had snow and hail but we’re so busy, particularly at weekends, and you are best to ring ahead to book.”
Over to West Lothian and Linlithgow Loch where rain and sleet, along with bitter North East winds, has impacted. Even diehards didn’t venture out.
Members of the Gilmerton Club did cast a line and hooked 16 fish for 49lbs, the best fish was 6.5lb, and the top patterns were diawl bach and buzzers.
ABC & D Club were also out and hooked 20 fish for 54lbs. Their best was 7.5lb on a midge tip and booby pattern.
Dunfermline Railway Club kept five for 16lb on snakes.
Balbeggie AC kept 12 for 27lbs mostly on boobies and buzzers and West Lothian Fly Dressers kept ten for 28lbs on diawl bach and cormorant.
Ian Dobbie landed eight on buzzers and another regular, Nigel Muckle, and his friend returned 11 fish, mostly on black buzzers.
A spokesman said that the relatively low catches are down to the weather as the loch is holding a healthy stock of fish.
He added: “All the larger fish being caught are grown on, over-wintered fish. We continue to stock weekly and all areas of the loch are fishable. Boats are available for most days for full day or four-hour sessions. Call 01506 671753 to book and evening sessions have started. Anglers can fish from around 4pm to dusk.
Nearby, Gordon Reid netted a 10lb-plus rainbow at Bowden Springs and Billy Wilson also joined in the fun with an 8lb brownie. Both fish were tempted by a buzzer. S Prior weighed in with a rainbow of over 8lb.
At Blackridge, Jimmy Fairley won the Winter League at Drumtassie with 90 fish while Andy Brown was second on 56 fish. Recently, buzzers have been the preferred pattern.
In Edinburgh, Harlaw has been busy with buzzer patterns scoring. Robert Ross, company secretary for Malleny Angling, said that up until the recent heavy rain, yellow dancer and viva on a standard size 10 hooks fished at about 3ft was doing well. He had ten in one session on the flies mentioned.
Black buzzers seem to be tempting fish and any trout cleaned is full of caddis, sticklebacks and black buzzers. The egg pattern in yellow or green still continues to account for many fish.
Ross added: “As we move into warmer weather the MayFly will soon emerge. Mayfly nymph, hares ear and peasant tail tied on long shank size 10 will tempt many fish as will a dry Mayfly. Fish in the surface film. Floating or sink tip line is all that is required.
“The fish are in excellent condition with many fish up to 2kg being reported. A good quantity of blues have been stocked in the 1kg to 1.5 kg (2lb to3lb plus) size. These fish will test any angler. Anglers catching bag limits are reported most days.”
Ross stressed that visiting anglers must purchase a permit before arriving at Harlaw as they are not available from on-duty bailiffs.
Finally, in Midlothian, three clubs enjoyed productive days out at Glencorse, Rainbow Warriors, The Heriots and North Berwick, with lures proving popular choices. There has, however, been heavy rain this week which could make things challenging according to owner, Bill Taylor.
At Rosslynlee near Penicuik, M Daly tempted nine on apps with B Hunter and G Wells both recording six on lures.
Finally, the weather kept skipper Derek Anderson and Aquamarine Charters in port at Eyemouth for nearly two weeks but the boat was out this weekend and catches were good.