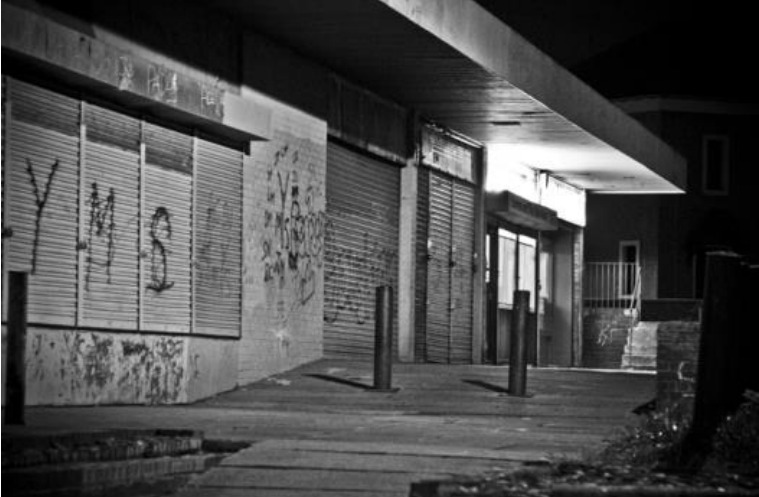 Plans to redevelop a set of rundown and underused buildings have been shot down by the council, despite the developer describing the current site as a ‘blight’ on the neighbourhood.

Livingston-based property developer Emmanuel Ebeh has submitted plans to demolish the 1960s-era commercial properties at 56 Saughton Mains Gardens and replace them with a set of 38 modern flats and retail units.
Together with Kiran Bala and Mandeep Bassi, who both give their address as 56 Saughton Mains Gardens, Mr Ebeh has formed the limited company Manbay Homes, which submitted plans to Edinburgh City Council planners in March of this year.
The plans would see 12 one-bedroom apartments, 23 two-bedroom apartments and three three-bedroom apartments, together with class one retail units and a hot food takeaway store.
Currently, the site is occupied by a convenience store and  takeaway.
However, in September, council officers rejected the planning application, citing a number of concerns, including: the proposal does not consider the development of the adjacent land; it does not ‘positively impact’ the neighbourhood; the applicants have failed to consider tree planting; and the need for affordable housing has not been addressed.

Mr Ebeh, through his agents, Duddingston Road West-based planning consultant Format Design, subsequently appealed to the council’s local review body, which met on Wednesday to discuss the proposals.
An appeal statement, submitted to councillors ahead of the meeting, reads: “It has been very difficult for the appellant to comprehend how such a comprehensively negative assessment has been made at a point where the appellant was seeking to resolve small matters of issue relating to roads and drainage at a very late stage in the proceedings.
“It is entirely inappropriate to require, in this case, that the appellant should have considered the redevelopment of the adjacent land.
“This land is not available and the owner of this site has not been available for contact.
“Failure to allow this site to progress independently will only prove to prolong the blight of this area.
“It is hoped that this development may in fact stimulate the development of the next-door site.
“It is therefore hoped that this review will agree that it is important that this development be permitted to proceed and to recognise the significant benefits that it will bring to the area.”
Council planning officers also produced a report ahead of the meeting, outlining their recommendation for refusal.
It reads: “The proposal represents a poor quality design response to the site and local context, by virtue of its siting, layout, height, form, scale, proportions, material finishes, architectural detailing, design of private greenspace, public realm and landscaping.
“There are concerns regarding the quality of amenity for future residents including the large proportion of single aspect flats, level and nature of private greenspace and operation of commercial retail space at ground floor level.
“The design proposals are weakly developed detail for a scheme of this scale and nature.
“A noise assessment and affordable housing statement have not been provided and given the broader issues relating to design, amended information has not been requested from the applicant.”
Craigmillar/Portobello councillor, and Vice-Convener of the Planning Committee, Maureen Child, said: “There are a number of reasons for refusal, and there isn’t one I would reject.
“I think the officer recommendations are sound, I think it’s a ‘slam dunk’.”
SNP councillor for Leith, Rob Munn, said: “The report makes a lot of negative comments regarding planning policy.
“That’s a real shame because what is there now is negative and it’s disappointing that the developer has dropped the ball, essentially.”
Councillors voted unanimously to refuse the planning application.