In its opening programme is the highly anticipated new release ‘Tenet’ from Christopher Nolan and current Best Picture Oscar holder ‘Parasite’ (including screenings of the newly-released black and white version) from Bong Joon Ho.

Read our review of Tenet here

Also playing there is an Icelandic thriller ‘A White, White Day’, Romanian comedy ‘The Whistlers’, ‘Moffie’, a complex exploration of sexual identity set in apartheid era South Africa, and ‘The History of the Kelly Gang’, a grimly playful take on the myths surrounding Ned Kelly, leader of the notorious Australian Ned Kelly Gang.

Audiences at the Filmhouse from today should expect new systems to maintain staff and customer safety. New signage, floor markings and one-way systems have been installed with an abundance of hand sanitiser. A thorough and regular cleaning schedule with e-ticketing and contactless scanning and payments for drinks, snacks and merchandise has been introduced. Face-coverings must be worn when not eating and drinking and staff have been newly trained to answer any questions customers have. Filmhouse will also operate at a reduced capacity in the cinemas and the Café Bar, so customers are advised to book tickets and reserve tables online early.

Rod White, Head of Programming at Filmhouse said: “Watching films at home is one thing, but what’s become clearer than ever before is there really is no substitute for the cinema.”

In addition to its role as a cinema, Filmhouse is also a charity and a community hub for film fans across Edinburgh screening over 850 films, seasons and special programmes to 200,000 people annually. This reopening was made possible with the huge support shown for the Filmhouse crowdfunder which raised more than £60,000 towards the additional costs of protective measures and equipment.

Dougie Cameron, Chief Operating Officer, said: “At Filmhouse we’ve really missed our audiences and the joy of watching movies and spending time together! The staff have been hard at work making some changes and undergoing training to ensure everybody’s safety. A huge thank you to all who contributed to the fundraising campaign, we really couldn’t have done this without you. We feel ready, and excited, to safely welcome everyone back.”

Rod White, Head of Programming at Filmhouse said: “Watching films at home is one thing, but what’s become clearer than ever before is there really is no substitute for the cinema. We’ve so missed selecting the best of what’s out there for audiences to enjoy and simply cannot wait to welcome everyone back. And there’s so many films to catch up on!”

Filmhouse is a world-class, three-screen independent cinema in Edinburgh showing a wide range of films from quality crowd-pleasers and family films to esoteric arthouse works, via restored classics, retrospectives and themed seasons and festivals. 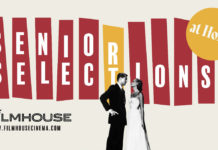