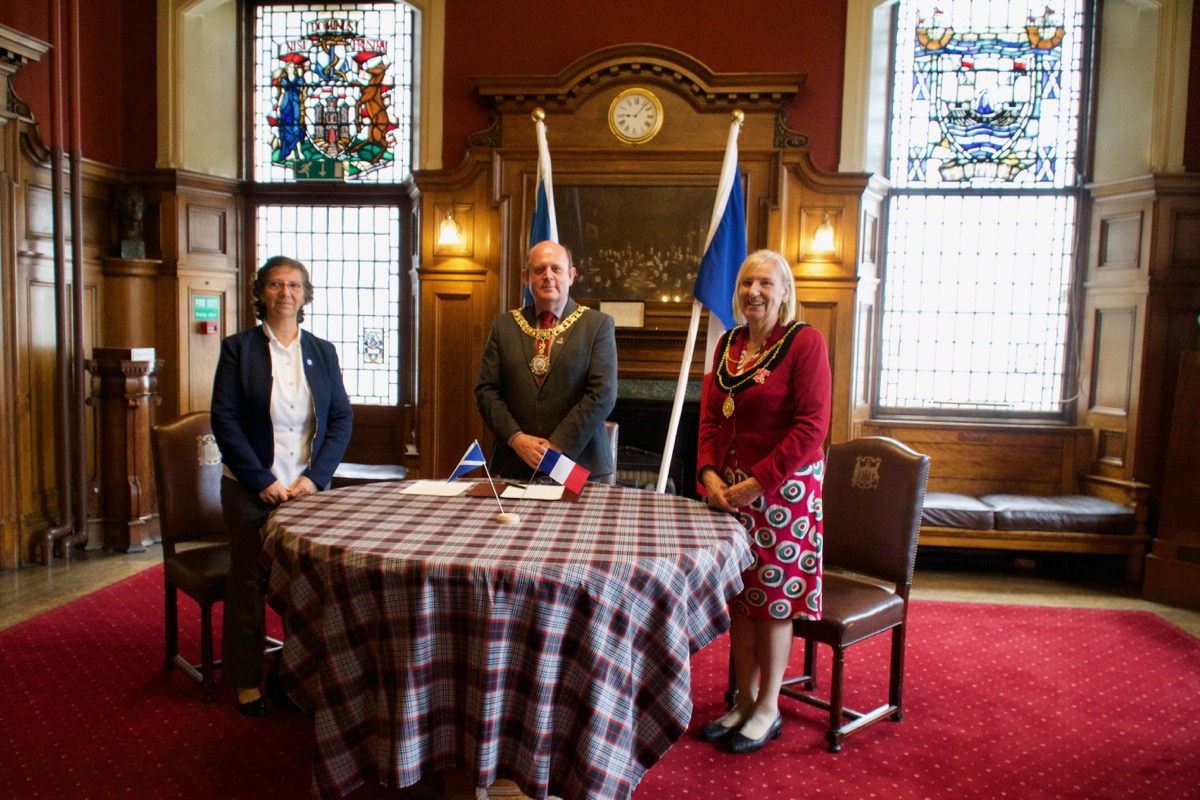 The Rt Hon Lord Provost of Edinburgh, Frank Ross, today signed the Friendship Agreement with the northern French village of Contalmaison which was passed at a recent council meeting.

The purpose of the agreement is to formalise the already cordial relations between the capital and the final resting place in France for many soldiers from Edinburgh.

These were the men who were part of McCrae’s Battalion who fought at the Battle of the Somme on 1 July 2016. They were led by Lieutenant-Colonel Sir George McCrae who though born in Aberdeen was brought up in Arthur Street in Leith, rising to become the Liberal MP for East Edinburgh in 1899. Prior to that he was a city councillor. He became the colonel of his own teetotal battalion, the 6th Royal Scots. It was in August 2014 that he himself volunteered for active service and then the War Office accepted his offer to raise and command a battalion. His office in George Street was besieged by media and there followed the historic public meeting in the Usher Hall on 27 November 2014 when he invited young men to go to war with him.

The 1350 men who joined the battalion at the recruiting station in Castle Street included professional footballers and other sportsmen. Sir George’s football team was mainly made up of the star players of Heart of Midlothian, Raith Rovers and Falkirk Football Club as week as players from St Bernard’s, Hibs and East Fife. They were unconquered during the war and played in the red, green and blue colours which are still used in the McCrae’s Battalion tie.

Eleven professional players from Hearts FC had joined the battalion, and on the morning of the battle three of them died. It is believed that 30,000 officers and men were lost in the first hour and almost double that by the end of the day. McCrae was sent home a few weeks later suffering from typhus and it is said that he never really recovered from the experiences on the Western Front. He died in December 1928 and is buried beside his wife Lizzie in Grange Cemetery.

The @LordProvostEdin has signed the Friendship Agreement with Contalmaison in a small ceremony including representatives from @mccraesown at the City Chambers today with @cgfEdimbourg in attendance pic.twitter.com/E0Zmz8HcPO

The Lord Provost said at the signing in the City Chambers: “This is a historic event. I know this has been pushed for for many years. I had a long conversation with Jack Alexander earlier this year when he again pressed the case for recognising or formalising the relationship between Edinburgh and Contalmaison in relation to the Somme. And that interlinking between the two communities goes back over 100 years now.

“Since the cairn was unveiled in 2004 there has been an annual pilgrimage on 1 July to Contalmaison to have the commemoration then. I think it’s long overdue that we do formalise this and I would like to thank McCrae’s Battalion and Jack in particular for continuing to knock on that door until we as politicians finally listened. It is integral to Edinburgh’s history and it gives me great pleasure to be here today to carry out the formal signing following council’s decision to enter this formal agreement.”

Laurence Païs, Consul General for France, who is hoping to go to Contalmaison next year, told The Edinburgh Reporter: “It is a very important moment in the First World War, The Battle of the Somme and the role played by the British Army especially by the Scottish soldiers in Contalmaison. They helped save this village from the German Army, I am really glad that we have this agreement now to memorialise and show the next generations how important the relationship between France and Scotland is.”

Jack Alexander who is Vice Chairman of the McCrae’s Battalion Trust addressed the small audience in the City Chambers, saying: “I know that the men who served in the battalion wanted to build a memorial. It took a long long time to do it and they wanted to have some kind of understanding with the locals because there are 500 or more young lads from this general area buried next to their village. They care for them and their memory in a way that has been overlooked by us for decades. For the city of Edinburgh to finally embrace the village of Contalmaison and the traditions that surround remembrance over there is a landmark moment. For everybody involved in the decision to do this from the council, from McCrae’s and all those who follow this story this is an honourable moment and I am very proud to be here today.”