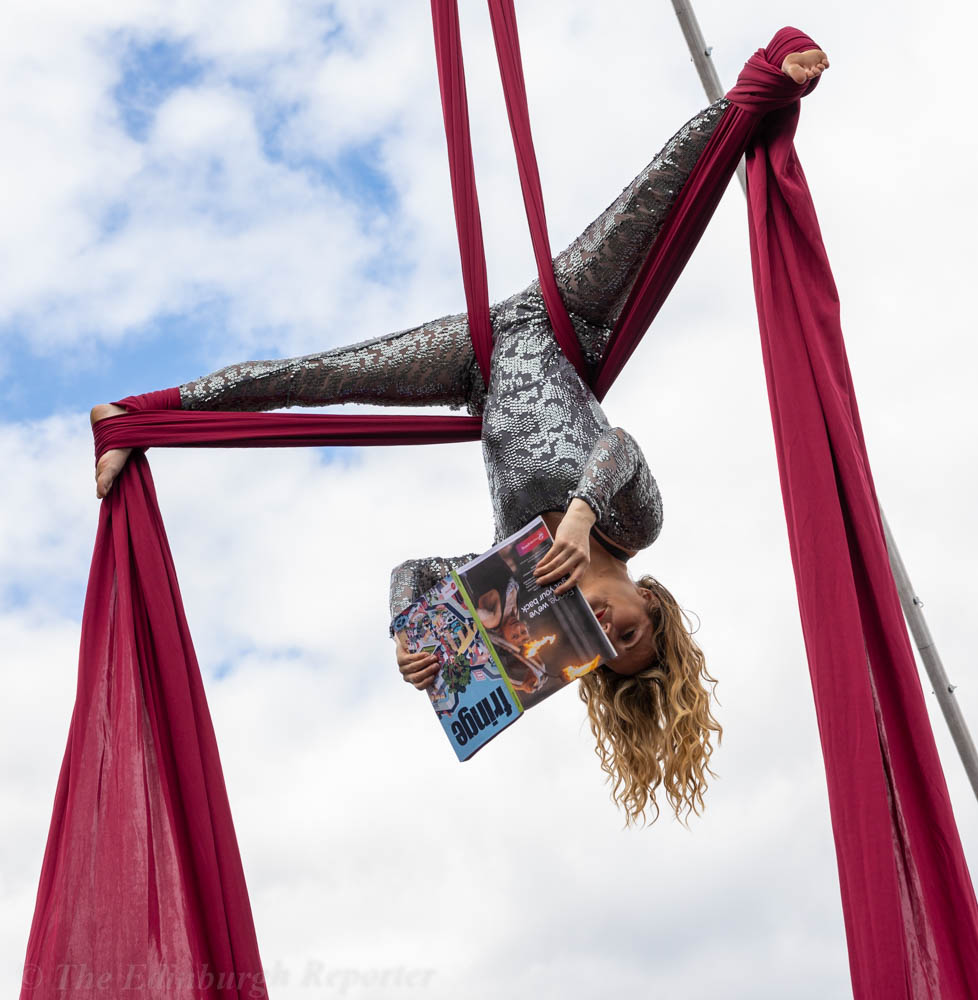 The event held on the first Saturday of the Fringe is called Meet the Media when Fringe performers and producers line up for ages (in yesterday’s case outside the Bayes Centre in the sun) and then come in to sell their wares to those who might write about them or review them.

It is a fabulous event with people from shows of all genres, big and small and one which we are quite privileged to take part in – but sadly you cannot speak to everyone….. We did try to get photos of some of them and please do take a look below to see if any of these shows take your fancy.

It is a monumental effort to put on a Fringe show – and the hundreds of people who turned up had all dressed up and brought their props of all kinds with them.

This is a selection of those we met yesterday afternoon

HoneyBee is a new play written by the award-winning poet Eleanor Dillon-Reams, combining spoken word, dance, stand-up and a thumping festival-driven soundtrack. This marathon feat of a show tells the story of Kate, as she journeys to rediscover her identity and self-worth. Flipping the bird to the patriarchy and dancing in the face of adversity, Kate’s story represents a generation’s search for purpose. Performed by the writer, it’s Fleabag meets Kate Tempest with a dash of dirty bass.

A herstory opera about women warriors; weaving together verbatim testimony of contemporary army servicewomen with the story of Flora Sandes, heroine of the Allied front line in World War I, created by Rose Miranda Hall and Lila Palmer with The Band of the Royal Regiment of Scotland. We are a proud female team reflecting the diversity of the UK and Commonwealth, including director Miranda Cromwell (Young Vic, Old Vic 12) and singers Simone Ibbett-Brown (Glyndebourne, ENO) and Teiya Kasahara (COC, Tapestry). Tickets include admission to Live Equal, a portrait exhibit by acclaimed photographer Wolf James. Tickets here

Darkness to Light is a photography exhibition. “We worked our way through 14 glamorous and sexy models with a supporting cast of thousands, a horse called Whoopi, 100 litres of molasses and a portable shower unit. This collection of 17 large, colour images investigates the mental baggage we all carry around and possible redemption should we look for it, and also invites the viewer to contribute their own experiences to each image.” Open 10.00am until 7.00pm daily FREE.

4th April 1968. Four years after receiving the Nobel Peace Prize for his dynamic leadership of The Civil Rights Movement, Martin Luther King was assassinated. Set the night of his shooting in a Tennessee motel room, this new solo play explores the extraordinary man behind the legend. ‘The ultimate measure of a man is not where he stands in moments of convenience, but where he stands at times of challenge and controversy’ (Martin Luther King Jr). Written and performed by Christopher Tajah. Songs sung by Paulette Tajah. Director: Bernie C Byrnes Tickets here

When an inflatable doll comes to life could it be just the man Kate needs? Workaholic Kate is “gifted” a blow-up boyfriend and keeps it as an act of defiance. Soon, the doll becomes the only person she dares to be herself around… but as it begins to take on a mind of its own, Kate realises the dangers of letting someone in. A touching and hilarious exploration of the challenges, joys and pitfalls of allowing yourself to be vulnerable, Me and My Doll is a romantic comedy with a twist. Tickets here

F Scott Fitzgerald’s sparkling, waggish tales of 1939 Hollywood delightfully rendered by LA-born actor Paul Birchard. Pat Hobby, script hack who was hot when the movies were dumb, lurches from job to job, managing by luck and low cunning to more or less avoid the abyss of unemployment and despair. Birchard himself left Hollywood in a bizarre flash of sanity to study acting in Glasgow! Lurching himself from job to job, he discovered The Pat Hobby Stories. Amazed by their timeless, savage humour, he performs them with a zest and relish that effortlessly evokes unbridled laughter. Tickets here

Legs* are what most humans stand on. They also allow humans to walk, crouch and lunge. If at any point in your life you have used your legs, thought about legs or if you know someone with legs, then this is the show for you. *Warning: this show may contain legs. Tickets here

Get your groove on in this fabulously fun musical chat show hosted by Aussie singer, producer, talent coach and ex kid’s TV star John Rowe. Not so carefully treading that fine line between kitsch and kool, this show is a superbly silly mix of groovy live music, spontaneous activities, chit-chat, show-and-tell, dodgy dancing, surprise guests… and donuts! A night of unadulterated fun with John and his band in his funky makeshift lounge room. Every show is different… every show’s a roaring hit! Tickets available

A verbatim play about ordinary young men in extraordinary times. Bomb Happy evocatively brings to life the powerful testimonies of five Normandy Veterans, inexperienced young conscripts who find themselves part of one of the most dangerous operations of World War II. As the action unfolds, memories – humorous and harrowing – collide, allowing a close-up experience of life on the front line, whilst wives’ accounts highlight the lifelong impact of PTSD. Post-show Meet the Veterans at Friday and Saturday performances Tickets here

Circus for grown ups: a decadent blend of sensational acrobatics, operatic cabaret and twisted burlesque. Weeklies winner Best Circus Adelaide Fringe 2018 and Fringeworld 2019. ‘Welcome to a circus for the new age… Brilliant performances covered with rhythm and attitude with a certain aura permeates the venue that embodies the phrase “Filthy and Gorgeous”‘ (WeekendNotes.com). ‘The performance is so high energy, so passionate and executed with such abandon that it can’t help but leave you feeling elated and empowered… if you aren’t turned on by this you might want to consult a physician, because you’re probably clinically dead’ (SmutButtons.com). Tickets here

A herstory opera about women warriors; weaving together verbatim testimony of contemporary army servicewomen with the story of Flora Sandes, heroine of the Allied front line in World War I, created by Rose Miranda Hall and Lila Palmer with The Band of the Royal Regiment of Scotland. We are a proud female team reflecting the diversity of the UK and Commonwealth, including director Miranda Cromwell (Young Vic, Old Vic 12) and singers Simone Ibbett-Brown (Glyndebourne, ENO) and Teiya Kasahara (COC, Tapestry). Tickets include admission to Live Equal, a portrait exhibit by acclaimed photographer Wolf James. Tickets here

An award-winning theatre-concert about memory loss, legacy and myth performed by an international supergroup of musicians. An extraordinary exploration of what it is to lose the memories that make us who we are and the stories that connect them. From ancient mythology to family legacy, what remains each time we turn to look back? Original songs, live sound-processing and personal recordings bring light to the experience of living and dying with dementia and the imprints that outlast us. Fringe World Weekly Award winner, 2019. Tickets here

Baby wipes, glitter and cans at the ready, Joni and Scarlett head off on their respective weekends. From two sides of Dublin City, the pair unexpectedly meet in the neon fields of Irish music festival Electric Picnic. Hysterically riotous and soul-stirring, Electric probes our innate prejudices and preconceived notions of who we are while taking you on the session of a lifetime! Tickets here

One dinghy. Lost at sea. Four disillusioned knobheads. Join Britain’s most dysfunctional quartet as they attempt the impossible mission of towing the UK away from the continent. This new comedy follows the intrepid but ignorant explorers as they grapple with life on the ocean and the futility of their existence. On a crusade to somewhere sunny, they encounter rough winds, soggy pasties and trouble with their neighbours. After weeks and weeks of parlour games and pissing overboard, food is running out and patience is wearing thin. Wherever it is they’re headed, they’re taking Britain with them… Tickets here

‘We are going to liberate the hell out of 20,000 chickens.’ Welcome to The Chicken Appreciation Society and welcome to the mind of former meat processor, Comrade Egg. She wants to change our future and she needs your help. Lecoq-trained company, Mother Bunch bring you, Comrade Egg and the Chicken of Tomorrow, a dark, funny and bold show about wanting to make a difference and not really knowing where to start. Using clowning and a high level of audience interaction, Comrade Egg explores themes of social justice and PTSD in the meat-processing industry. Tickets here

After their successful run of Greyhounds in 2018, Time & Again return with Edwardian epic, Clouds! The year is 1913 and women are rising up… Winifred Baxter is determined to become the first Englishwoman to enter an air race, learning to fly amidst the chaos of the suffragette movement, a glorious garden party and far too much nephology: the study of clouds. New writing combining the suffocating society of pre-war Britain with a touch of comedy, early feminism and pure vintage flair! Tickets here