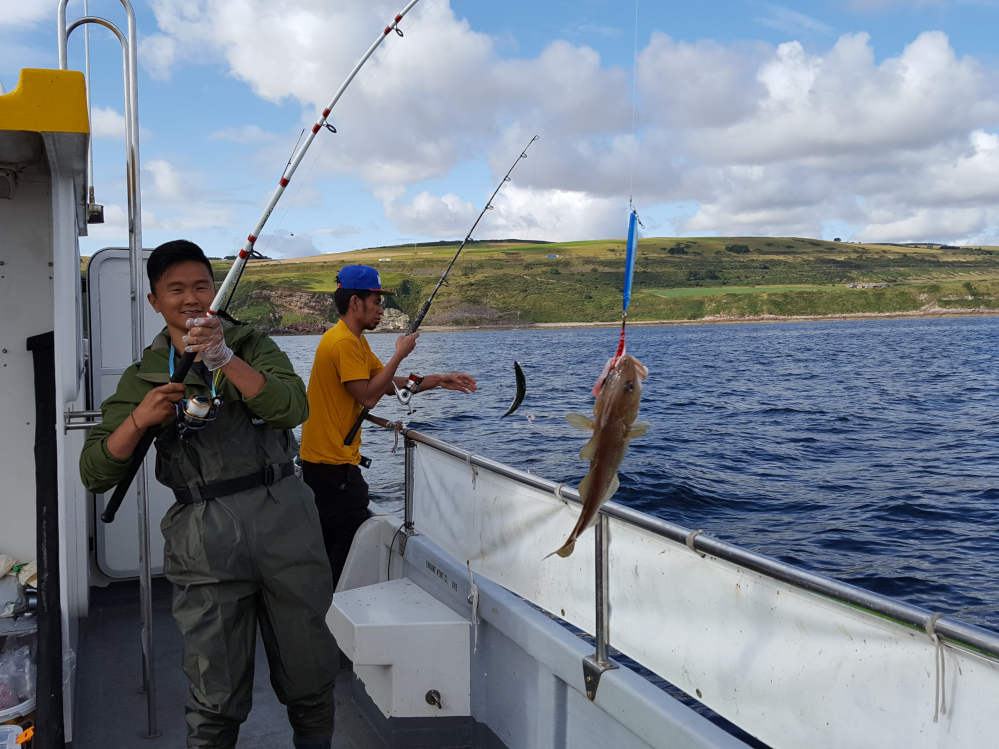 Dolphins suddenly emerged and every angler on board the busy Aquamarine Charters boat stopped.

The dolphins did not stay long but off Burnmouth in the Borders but it was just one of the memorable moments of a six-hour trip on Sagittarius.

Another was the seals emerging from the water as we entered Eyemouth Harbour and they were quick to take mackerel offered from the stern of the boat.

Oh, the fishing. That was memorable too. Skipper Derek Anderson set sail at 9am and headed for a mark around 15 minutes from port.

We had tackled up. Bright red, yellow and white feathers, with a tinge of blue, were the favoured option and three sprightly mackerel were hooked within seconds on my three feathers in the first cast. A good sign.

Several more were landed within minutes and they just kept on coming. The buzz around the boat was palpable and our Chinese friends – eight of them – soon began to fill a large box with their combined catch.

We moved on, this time in search of cod. The next mark was near Berwick in sight of the railway and we noted several LNER trains powering south towards London as we tackled up.

The first bait tried was sand eel but you could not keep mackerel away. They jumped at it.
Then we tried a seafood cocktail of mackerel, prawn and mussels all tied onto the hook with elastic thread.

It took some time but at last a cod arrived on board. Sadly, it was below the size limit and it was sent back to fight another day.

Another arrived soon after but, again, it was below the size limit and some time after that a third was brought on board. It was a few centimetres short of the limit and so it also returned to the depths.

We kept on trying to cod but they stayed away. Mackerel didn’t and so we continued to fill our bags with the distinctive silver fish packed with Omega 3.

As I waited for those elusive cod I could not help thinking that this trip would be ideal for youngsters interested in taking up the sport. We all caught fish.

For example, an eight-year-old was buzzing last weekend when she landed around 30 mackerel and one 4lb cod during one of Derek’s trips.

As we headed back to port, I gutted my fish were gutted and bagged.

We docked and it took two of the Chinese party men to lift their haul up the gangplank and into their car.

Derek runs charters throughout the year, weather permitting, and he is already taking bookings for the winter season.

That proves how popular boat fishing is. The bonus for those just starting the sport is that rods and lines plus lures are available onboard for us.