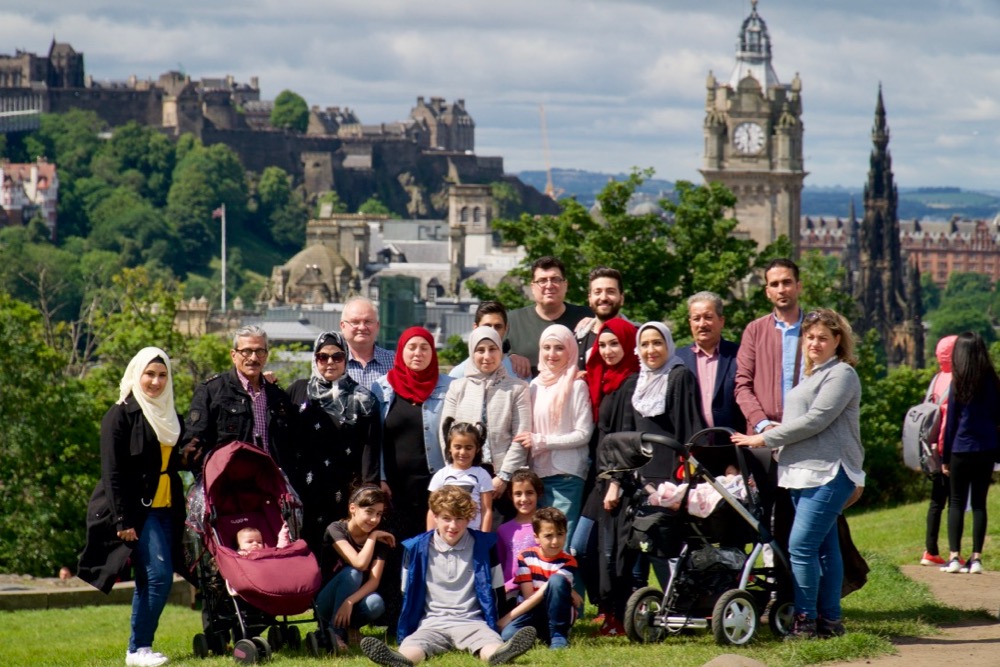 In a packed-out EICC’s Pentland Theatre, in a co-production with the Pleasance, a cast of Syrian refugees, performed a one-off gala performance of The Trojans, on Wednesday, 7 August 2019, directed by Victoria Beesley, a brand new adaptation of Euripides’ 2400-year-old anti-war tragedy.

Euripides wrote The Trojan Women in 415 BC in Athens in the middle of the Peloponnesian War against Sparta, as a protest against an Athenian war crime. Earlier in the year, Athens had given the neutral and independent island of Melos an ultimatum, threatening them with destruction if they did not subjugate themselves to the Athenian Empire. The Melians chose to fight and were crushed brutally, with the Athenian force slaughtering the adult male population and enslaving the women and children. Euripides chose to explore the morality of these actions through the plight of the Trojan Women at the fall of Troy. The men are all dead, the city is in flames, and about to be razed to the ground. The Women, realising that their old life has been irrevocably lost, await to hear their fate at the hands of the victorious Greeks.

The themes of loss of home, relatives and loved ones, community and status, are the same suffered by refugees down the ages, and more recently by Syrians.

Performed in Arabic (with surtitles) and also in English, by eighteen men and nine women, the play is the culmination of nine months of drama workshops for Syrian refugees in Glasgow’s Platform Theatre. The aim was to build links between Syrians newly arrived in Scotland and local communities, to allow Syrians who have found a haven in Scotland to work through their depression, isolation and trauma.

It’s a stunning, raw piece of theatre which brings home the trauma of these atrocities in Syria to the audience and the reality of what it means to flee war, and arrive in a strange land.

The key is that the cast are essentially playing themselves and it gives them a platform to tell their stories to the world. It moves the audience to tears and also the actors, as they stumble to get some words out, noticeably and understandably, still affected by their individual traumas.

From the story of 19-year-old Hiba, who fled Syria, seven years ago, after her school was shelled by the Syrian army who declares: “I am a child! You are supposed to protect us not kill us!” to the desperate mother who craves her family be reunited, but who are separated by borders, with one living in Sweden and another in Germany – are just some of the horrendous and unfathomable tales relived.

The play finishes with the refugees joined by their children on stage, as they tend and nurture flowers and plants, signifying one hopes, a new beginning and start and being welcomed into the ‘Flower of Scotland‘.

Asked to give an address at the end of the play The Minister for Europe, Migration and International Development, Ben McPherson MSP, genuinely moved by what he had witnessed, said: “It’s time to reflect on what we have seen. The power of art can reflect on the human condition and build a better world and a more inclusive Scotland.”