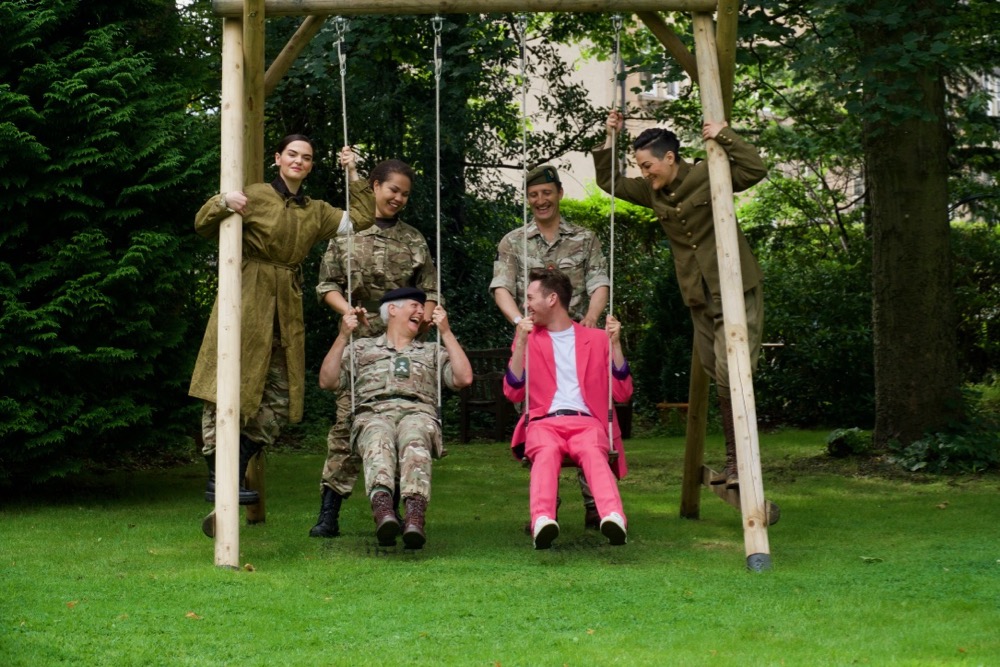 In East Claremont Street there is a little corner of the Fringe which is all about the Army. This is the Army’s own Fringe venue, at the historic Hepburn House Army Reserve Centre in the New Town, which will host five shows from today until 25 August 2019.

Not only can you watch shows but there is also food available to keep you going during these long Fringe days. A military chef will serve genuine Forces food at bargain prices – including Army Curry and Field Kitchen Stew in the Mess Bar.

This morning we had three world-class opera singers, an actor in a pink suit, two brigadiers (one of whom is the highest ranked woman in the Army in Scotland) all on hand for a photo call to open the third Army@TheFringe.

The singers are performing the new opera Dead Equal and Nicholas Alban is appearing in The Happiness Project.

Two of the Scotland’s most senior Army officers – Brigadier Suzanne Anderson, the Deputy Military Secretary, and Brigadier Robin Lindsay, the operational head of the Army in Scotland, officially declared the venue open.

Army@The Fringe has a truly representational range of shows about military life across time and commemorates significant moments of national heroism, from the First World War, to D-Day, and to more recent deployments in Afghanistan.

Brigadier Robin Lindsay, who is in overall charge of Army@TheFringe, said: “This year’s programme explores an astonishing range of issues about life in and out of uniform.

“We are proud to be balancing the Army@TheFringe programme by sharing the stories of contemporary female soldiers alongside their historic male counterparts.

“It’s a privilege to be hosting Bomb Happy and Owen Sheers’ play Unicorns, Almost which address the lives and deaths of soldiers who took part in the D-Day landings 75 years ago and then fought to set Europe free.”

Brigadier Suzanne Anderson said: “It’s really pleasing to see Army@TheFringe putting such an emphasis on the role of women in the Army. So often when people think of a soldier they will picture a man. But shows like Dead Equal and Hallowed Ground really emphasise how long women have been part of the Army and the change that has taken place in their roles – often amidst quite intense social and political debate.”

The composer and librettist team for the opera, Palmer & Hall Music, explore the real-life character of Flora Sandes, a captain in the Royal Serbian Army, alongside the story of Jo Ekpe, a contemporary army medic.

Teiya Kasahara, who plays Flora, said: “What I love about Dead Equal is the focus on changing the narrative in opera from one that fetishises the destruction of women and minority characters, to one that celebrates their leadership and empowerment. Dead Equal honours the memory of Flora Sandes and shines a spotlight on the contemporary unsung heroes of the British Army: women.”

Simone Ibbett Brown, who plays contemporary medic Jo and runs touring intersectional opera company HERA, said: “It’s rare and wonderful to play a woman of colour in an opera, who is in charge of her destiny. Jo is a leader, a soldier, a medic, a mother … a real person. We met some incredible women who inspired and shaped Jo’s experiences in the show – her skill, humour, bravery and commitment all come from and are reflected in the women of the forces.”

For most of the year Hepburn House is a Drill Hall for training Army Reservists, but during the Fringe it is transformed into a performance space, staffed by soldiers and hosting shows intended to encourage debate about the role of the Army in the modern world – and wider social issues.

The programme consists of:

Bomb Happy: A verbatim play developed from the experiences of Normandy veterans.

Dead Equal: A female-led team tell the forgotten true story of Flora Sandes, heroine of the Allied front line in World War I, in a new opera. Flora and fellow nurse Emily Simmonds travel to the Serbian front as medical volunteers. Sick of the sidelines, Flora joins the Serbian army as a soldier while Emily continues nursing. Presented by Palmer and Hall Music. It is accompanied by a photographic portrait exhibition of serving Army women by Wolf James.

Hallowed Ground: Exploring the experiences of Australian women medics over the past century – including those who served with The Scottish Women’s Hospital.

The Happiness Project: Queer theatre looking at our need for non-sexual physical contact in a digital age.

There will be after show discussions during which the audience can raise questions with performers, directors and members of the Army. Army@TheFringe is once again taking place in association with Summerhall.

Verity Leigh, Summerhall’s Programme Manager, said: “We are delighted to be collaborating with the Army for a third year to present a programme of innovative contemporary performance.

“Army@TheFringe supports artists to bring new work to the Fringe and to reach new audiences. Once again, the artists presenting work this year have some fascinating, moving and intriguing stories and ideas to share with audiences.”

How to establish study routines in children and adolescents?