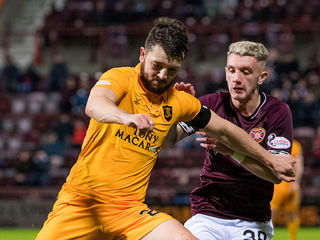 Livingston defender Craig Halkett has signed a pre-contract deal to take him to Hearts this summer.

Halkett, 23, is presently the Livingston captain and will make the short journey to Tynecastle in June after his contract with Livingston ends. He has played in the majority of games for Livvy this season.

Capped at Scotland U19 level, Halkett has made 144 appearances to date for Livingston, scoring 15 goals.

Speaking to the official Hearts website about the move, manager Craig Levein said: “I’m delighted that Craig has committed to signing for Hearts.

“He’s a talented player and, at 23-years-old, is at an age where he can continue to develop and progress.

“This club is the right place for him to do so and I look forward to welcoming him in the summer.”

Meanwhile, Hearts striker Uche Ikpeazu is a major doubt for the Gorgie side’s trip to Ibrox on Wednesday to face Rangers in the Ladbrokes Premiership. Ikpeazu is believed to have suffered concussion during Saturday’s 2-1 win over Aberdeen at Tynecastle and is being assessed by Hearts medical team.

Hearts have confirmed they will appeal the yellow card shown by referee John Beaton to Ikpeazu in Saturday’s game. Beaton believed the Hearts striker dived after a challenge by Aberdeen keeper Joe Lewis, but photographic evidence suggests the Dons player stood on the foot of the Hearts man.

For Hearts this is no time to draw