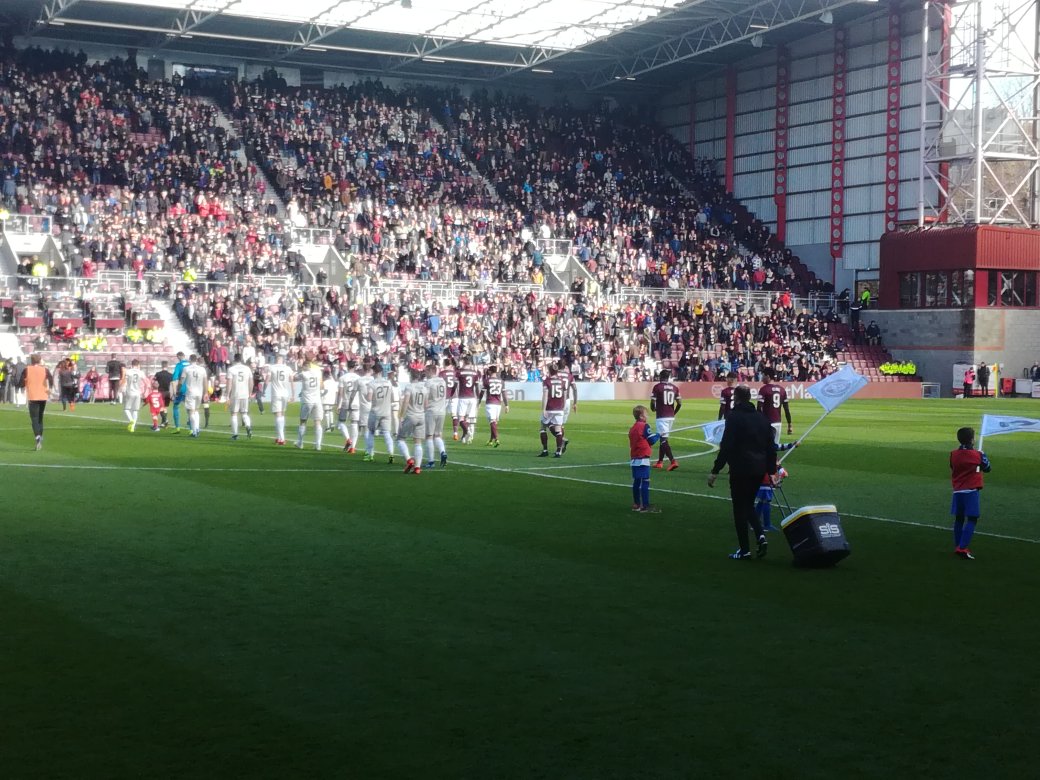 Hearts sealed a top six finish in the Ladbrokes Premiership by coming from behind to record a victory over an occasionally brutal Aberdeen team at Tynecastle.

Second half goals from Sean Clare and Uche Ikpeazu overcame McLennan’s first half opener for the visitors to move Hearts within two points of the Dons and ensure they would finish in the top half of the table come the ‘split’ next weekend.

Hearts boss Craig Levein made three changes from the team that lost meekly to Hamilton Academical a fortnight ago. Ben Garuccio – out with injury for ten months – Callumn Morrison and David Vanecek made way for Conor Shaughnessy, Uche Ikpeazu and Craig Wighton.

Hearts-Aberdeen games at Tynecastle usually attract a big crowd and this one was no exception. The Dons looked the likelier side in the first half although it was Hearts who had the first shot on target in the 10th minute when Ikpeazu’s effort was saved by keeper Lewis.

Aberdeen looked menacing going forward and it was no real surprise when they took the lead in the 16th minute. McGinn’s corner was headed against the crossbar by Cosgrove with McLennan nodding the rebound home. Tynecastle was stunned, the visiting support in one half of the Roseburn Stand excepted.

Two minutes later, Cosgrove fired a forearm smash into the face of Hearts captain Christophe Berra and could consider himself fortunate only to receive a yellow card from referee John Beaton who, it must be recorded, had an afternoon to forget.

Shinnie almost doubled Aberdeen’s lead with a long-range effort and the frustration among the home support was audible. However, the home team responded, and Arnaud Djoum had an effort on goal which went wide.

Hearts keeper Bobby Zlamal then pushed Cosgrove’s header over the bar before denying another long-range effort from Shinnie.

Hearts were booed off the field at half-time and the home support tried to console themselves with the prospect that things simply had to improve in the second half. Thankfully, from a Hearts perspective, they did.

The Maroons wasted a golden opportunity to draw level five minutes into the second half when Ikpeazu had the freedom of Gorgie Road to fire home, but he drew his shot wide of the post as the home support groaned in frustration.

But Hearts were much-improved after Levein’s half-time team talk and did draw parity on the hour mark. The much-maligned Jake Mulraney who, again, didn’t have the happiest of afternoons, ran at the Aberdeen defence who struggled to cope with his pace. As Mulraney ran into the Dons penalty box, he was brought down by Considine. Penalty said referee Beaton – one of the few decisions he got right all afternoon – and Sean Clare did his usual expert job from the spot. 1-1 and now it was game on.

Minutes later Hearts should have been awarded a second penalty kick when McGinn’s pass back to his goalie was intercepted by Ikpeazu who was brought down by keeper Lewis. Mr Beaton raced into the penalty box – the quickest he had moved all day – but didn’t award a penalty. Instead he flashed a yellow card to Ikpeazu for simulation (diving to you and me) It looked more of a penalty than the one that was given, and the decision not only infuriated the home support it seemed to inspire the Hearts man to prove a point.

Minutes later, Ikpeazu held off two challenges before firing a rasping effort on goal which was well saved by Lewis. Hearts were all over the Dons now and Lewis saved well from Craig Wighton.

With 13 minutes to go Hearts turned the game on its head. Considine and McKenna contrived to allow Ikpeazu to run into the penalty box and earn justice by firing a sublime finish past Lewis to put Hearts in front.

Soon after, Ikpeazu fell awkwardly after a challenge and appeared to be concussed. The big striker was taken off but looked groggy enough in the dugout to necessitate a stretcher to carry him around the perimeter of the field and up the tunnel to a standing ovation from the home support.

Hearts held out during the five minutes of added on time to claim a deserved victory which it has to be said, looked unlikely at half-time. The visitors seemed more intent in adopting an overly-physical approach to the game and paid the price.

“I didn’t think there was much in first half, but Aberdeen took their chance. We’ve come off a poor result at Hamilton and I felt we were negative as a result of that.

“But in the second half we played higher, were braver and got more opportunities. We’ve got a big week ahead of us, so a lot of things to look forward to.” 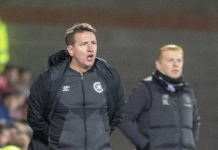