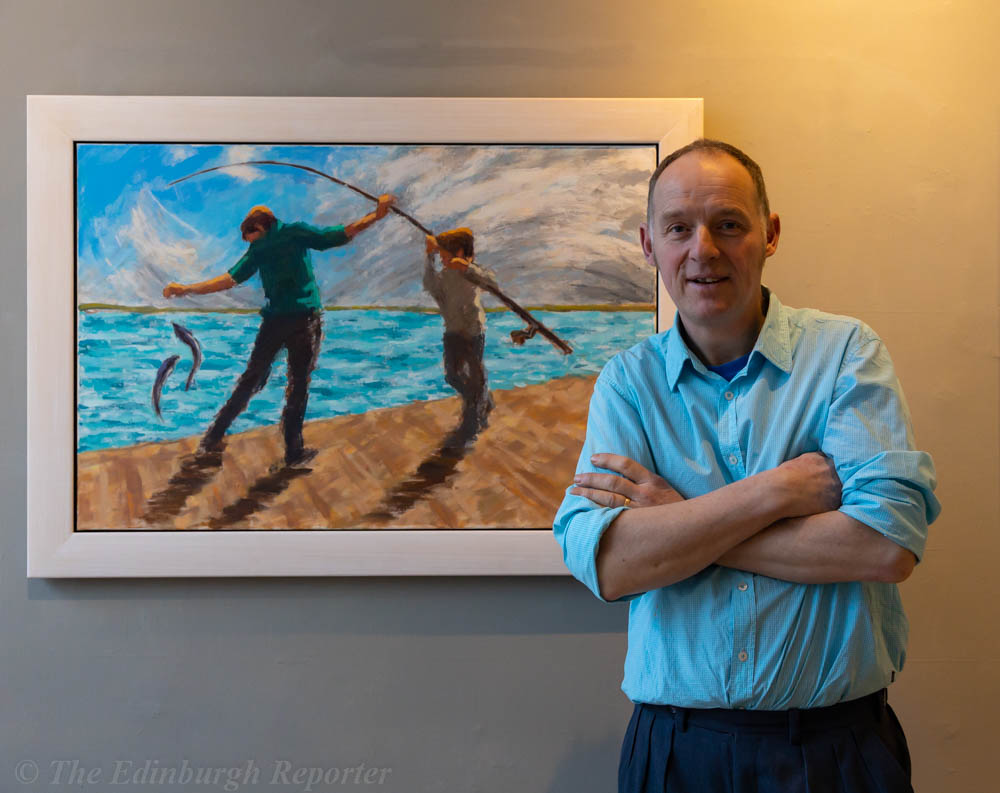 How many people can say that their lives were changed by a swimming pool?

A few Olympic swimmers? The participants in a strange water-based romance?

Not many artists, I imagine – but for Damian Callan a visit to Leith’s Waterworld proved transformational. It was there, while he was supervising special needs adults, that he saw people moving through waves and realised that movement was precisely what his paintings lacked.  He had come to art late, not beginning his studies at Edinburgh College of Art until the age of thirty, but he was never completely happy with his work;

‘I was producing lots of poor paintings. I tidied them up and painted them to death.’

Watching the swimmers was, he says, his breakthrough moment;

‘It undid all the things I tended to do – things that lost the vitality in the work.’

He started to paint more swimmers, gymnasts, other sports figures.  By then his children had arrived, and he realised they were his ideal models.

‘I was painting the life I was leading, a very beautiful life.’

Concentrating especially on scenes from family holidays on the west coast, Damian has now produced numerous studies of the children and their friends swimming, playing on the sand, fishing, boating and generally enjoying the freedom that summer brings. A new exhibition Moving Images at UNIONgallery brings together a wonderful selection of his work.

In Stormy Sea, figures jump the waves, one girl turning sideways, her hair flying in the wind. The surge of the sea – white foam on turquoise waters – is palpable. Big Wave shows two boys, one turning back to the shore, the other holding his arms wide as if to embrace the incoming water, while in Bigger Wave children run into the water as it rushes towards them, every movement full of energy and youth. Hebridean Paddle is, as its title suggests, more tranquil; the lovely rounded figure of a woman holds a young boy’s hand as they step together into a sea of slate grey.

Some of the works are shown as both charcoal drawings and oil paintings. Catch depicts two boys on a pier, one anchoring the rod as the other reaches for the fish.  The line arches above them in a perfect curve. The charcoal picture has a nostalgic air, recalling for me the illustrations of Edward Ardizzone; the painting reveals that it is a glorious hot day, the sky blue with tiny wisps of white cloud, the sea a dappled turquoise, white and blue. There is a sense of endless summer. Fly Fishing has a different feel; a lone figure in darker clothes casts a rod, leaning forward, one leg before the other, the waters grey. This is perhaps a day of west coast drizzle, dreich, damp and a true fisherman’s joy as the weather brings the catch to the surface. One can sense the midges.

On of my favourite studies is Bicycle Shadows, also shown as a charcoal drawing and as a painting. In the drawing we see two cycles in outline, their wheels little more than circles as the riders pedal away. These are not static bikes, they are moving through the landscape om their way, perhaps, to the beach. It is fascinating to see how the colour introduced in the painting completely transforms the scene and raises the temperature; now the wheels are reflected on the green and yellow grass, one rider’s hat intensifying the sense of heat, of the sun’s rays beating down. Colour, Damian says, facilitates spontaneity and instinct, an emotional response to the subject. He uses paint as he would use drawing materials, but he also favours the application of paint with a roller;

‘I use something harder to control but I still draw well; if you have less control you will be surprised by what you can do – the work becomes more exciting both for the artist and for the viewer.’

Boats and rock pools are as much a part of seaside holidays as swimming. In Escape perfect circular ripples fan out as three children row through the shallows. Here the feeling is one of freedom. It could be an image from Swallows and Amazons, but these are recent pictures (Damian takes photographs on holiday then paints from them in the studio), underlining the fact that Scotland’s remote west coast is one of the few places where such freedom can still be found. In On the Rocks a girl is especially full of movement, her arms outstretched to balance on the slippery rocks.

Movement also infuses Damian’s studies of his partner, as she fastens her dress (Green Dress), steps out of it and lays it aside (Undressing), and particularly in Blue Dress IV, as she leans back, arms behind her head, holding up her beautiful long hair. In At The Window she holds one arm across her breast as she attends to the side fastening of her dress. Charcoal versions of some of these paintings express even more movement, the pared back lines serving to emphasise every gesture. These are not ‘still’ lives in any sense of the words; they are vibrant studies of a living, breathing woman.

In Renaissance Italy, Damian explains, there was artistic rivalry between Florence and Venice. Florentines like Michelangelo were keen on drawing and precision, Venetians like Titian on colour and paint.

‘I have gone from a Florentine to a Venetian.’

Damian’s children are growing up and leaving home. There is a certain poignancy in Moving Images; time has passed, and he too will now move on to other subjects, but this exhilarating record of precious times will always be treasured.

This joyful exhibition celebrates drawing, painting and colour, but most of all it celebrates life.

Damian Callan teaches day, evening and summer school classes (the latter for adults and children) from his studio at WASPS Artists’ Studios, 2 West Park Place, – more information here: https://www.damiancallan.com/classes.html. He also runs drop-in sessions Easel Sketching in the Gallery twice a month at the Scottish National Gallery. These sessions are free, no booking is required and all materials are supplied. The next dates are 25 and 26 April, 2-4pm.

Damian has written two books on technique: Paint Like Degas and Paint Like Renoir. They are available from bookshops and online.