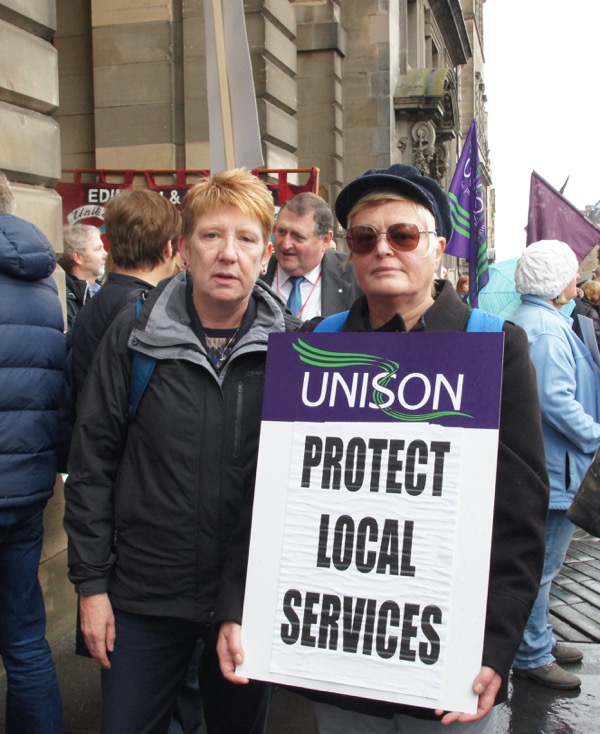 UNISON, Unite and the GMB have sent a joint letter to the leader of every local authority across Scotland urging them to improve the pay offer to council workers and avert strike action across local government.

These three represent local government workers and they have written directly to every council leader across Scotland in advance of the meeting of COSLA leaders being held tomorrow in Edinburgh. The three trade unions will be holding a demonstration outside of that meeting.

The letter to leaders states: “There is now a very real possibility of widespread industrial action across the local government workforce unless you take measures to improve the current offer.  We would urge you to do so”.

There was no progress in talks at a meeting of the trade unions and COSLA on the 9th November but it was agreed that a tripartite meeting – involving COSLA, the trade unions and the Scottish Government, may assist in exploring the urgent need for an injection of additional funding for local government from the Scottish Government and this is in the process of being arranged.

Johanna Baxter, Head of Local Government (Bargaining) said:  “COSLA leaders have the power to prevent mass industrial action across the local government workforce by listening to, and addressing, the genuine concerns of our members.  We would urge them to do so and to improve the current pay offer.”

Elaine Dougall, Unite Senior National Officer said: “Unite urges COSLA leaders to discuss and deliver an improved offer to local government workers as they meet on 30th November in Edinburgh to avert industrial action in the new year.  Local Government workers deserve a decent pay rise in recognition of the valuable contribution that they make in delivering crucial services across Scotland.”

Drew Duffy, GMB Senior Organiser said: “COSLA and the Scottish Government are running out of time to do more for the lowest paid in local government.  Our members are very clear that they are prepared to move to industrial action in their fight for a better offer and after a decade of cuts to their pay and conditions, no one should be surprised.  How the employer-side responds over the coming days will be a reflection of how they value workers on the front-line of our vital local services – and it will also shape the unions’ next steps.”