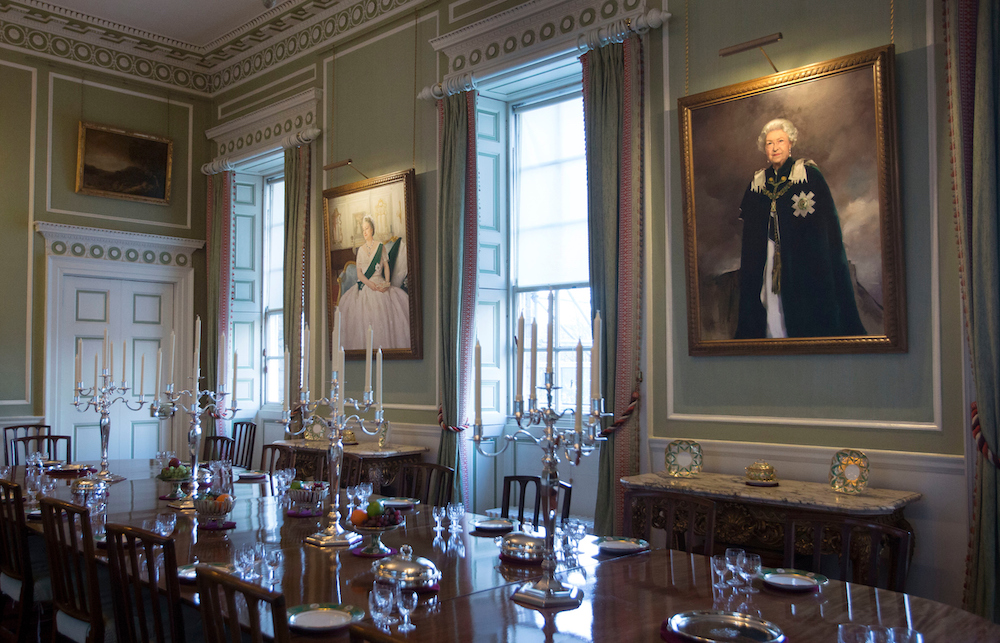 A new portrait of The Queen has gone on display at the Palace of Holyroodhouse, Her Majesty’s official royal residence in Scotland.

The oil painting, by artist Nicky Philipps, shows The Queen wearing the ceremonial robes and collar of the Order of the Thistle. Her Majesty is Sovereign of the Order, which is the highest order of chivalry in Scotland. The background to the painting is a view of Salisbury Crags, a series of cliffs in nearby Holyrood Park.

Visitors to the Palace will be able to see the portrait in the Royal Dining Room, still used today by members of the Royal Family for entertaining.  The new painting hangs alongside a portrait of Queen Elizabeth The Queen Mother, painted by Sir William Oliphant Hutchison in 1967, in which the sash, badge and star of the Order of the Thistle is worn.

The portrait of The Queen was commissioned by The Royal Collection Trust as part of a programme of investment to enhance the visitor experience at the Palace and tell the story of its residents, past and present.  In January 2019, a new multimedia guide to the Palace will be made available to visitors and will include an interview with Nicky Philipps about her painting.

Philipps said of the commission, “It’s nerve wracking, but it is enormous fun and it’s a fantastic honour to be asked to do it”.