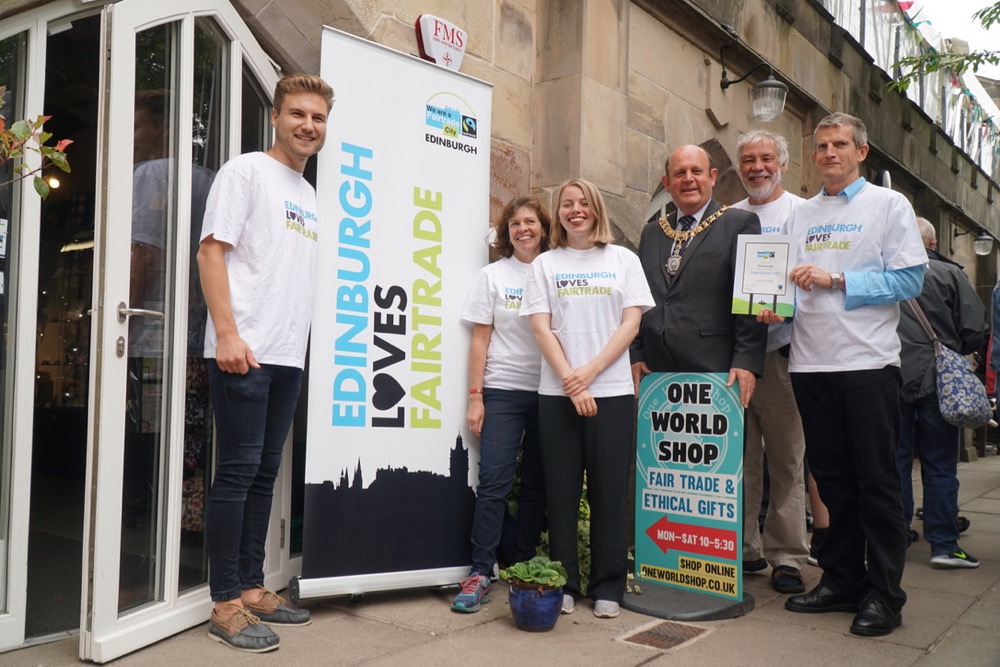 The Rt Hon Lord Provost of the City of Edinburgh, Frank Ross, visited the One World Shop at St John’s Church recently to receive the renewal of the city’s Fair Trade status in a new certificate.

The Lord Provost said : “I am very proud that we have renewed our Fairtrade City status, which is an important part of Edinburgh’s identity.  We have made great progress in the promotion of fair trade in Council facilities; in our educational institutions; in cafes and small businesses.

“We now wish to engage with larger businesses through Edinburgh’s Business Improvement Districts and Chamber of Commerce, and I encourage these groups and their members, and in fact all Edinburgh organisations, to make contact with this small but dedicated band of volunteers.”

The venue was a good one as this is a shop with very unusual gifts for everyone, and the route to their door is a well trodden path for many residents and visitors – and it is Fair Trade.

The One World Shop was set up by George Shand, a Traidcraft representative who had a passionate belief in trade justice and started out as a stall selling fairly traded products at St John’s Church. The shop became a limited company with charitable status in 1984 and the first Fair Trade certified product finally hit the shelves in 1994.

The Lord Provost celebrated with the city’s Fairtrade Steering Group that Edinburgh now continues to be a Fair Trade City.

Any organisation which has the Fair Trade certification adheres to the principles which include selling only foods and gifts which are produced by farmers and craft workers who: The FAIRTRADE Mark independently certifies that products meet economic, social and environmental standards. As such, it is the most widely recognised ethical mark worldwide.

For more information about the FAIRTRADE Mark and how to apply for Fairtrade status, visit www.fairtrade.org.uk.

To get involved in the Fairtrade campaign in Edinburgh, go to their Facebook pagehttps://www.facebook.com/edinfairtrade/ or email russell.salton@outlook.com