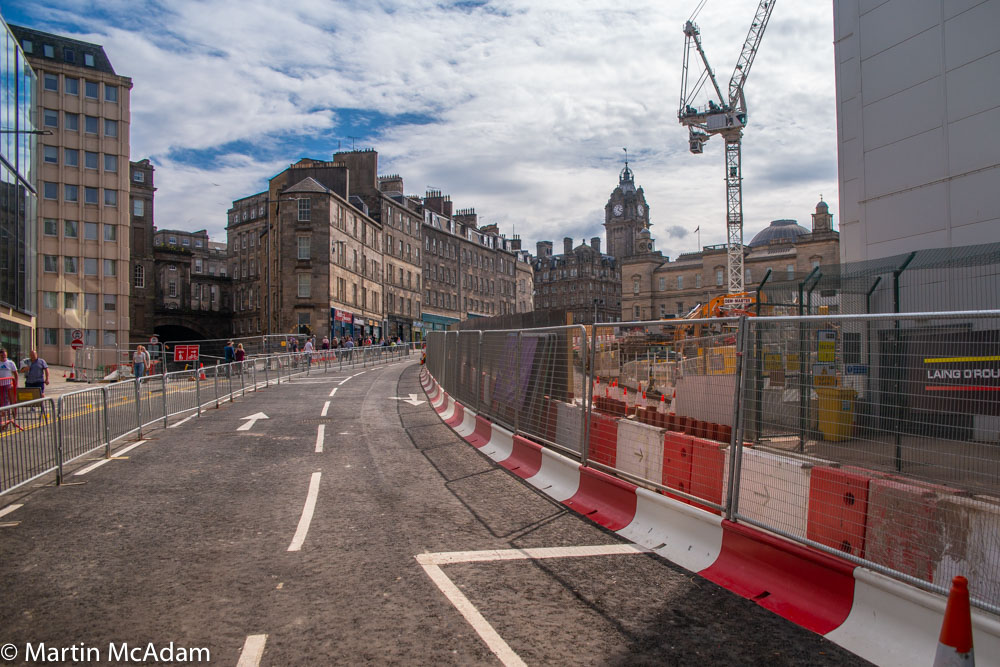 Leith Street will reopen to traffic in both directions by 6am tomorrow Saturday 28 July ahead of this year’s Fringe, following a programme of infrastructure improvement works which began in September 2017.

As you will read below the road layout is much the same as before without too much in the way of innovation which has met with criticism from cycling and active travel campaigners. We ourselves have very much enjoyed the lack of traffic in that area, and believe that the use of Regent Road as a diversion is a good one. But we also understand that this has not been universally approved by those living in Abbeyhill.

The council has a stated aim to reduce traffic and increase active travel in the city centre, and one of the major pieces of work which may be approved later this year is Tram to Newhaven. This will impact on Picardy Place down the hill from Leith Street where work continues anyway for the time being.

We would be interested to hear what you think. Please add your comments below.

Comprehensively reconfigured from the intersection with Waterloo Place to the junction with Little King Street, both southbound lanes and one northbound lane will be reopened to road traffic for the first time in 11 months.

Bus services will also return to Leith Street from tomorrow, with more details available at https://www.lothianbuses.com/.

The northbound inside lane from Waterloo Place to Greenside Row will remain closed as part of the safety initiatives in place during the construction of the adjoining Edinburgh St James site. As enabling works continue on Picardy Place, some traffic management will also remain in place at the northern end of Leith Street.

Overseen by Laing O’Rourke, the main contractor at Edinburgh St James, the works programme has created a high quality and much-improved environment along Leith Street, which better serves pedestrians, cyclists, public transport and road traffic alike. Below ground, infrastructure and utilities have also been renewed, greatly reducing the need for any future works or repairs.

The developer issued a statement relating first to pedestrians :

pavements along the full length of the road have been reconstructed using high quality materials and widened, largely by removing the central reservation that existed on the old road layout, creating a much safer and more accessible route for all pedestrians.

The new layout has also been designed with the intention of meeting the needs of those with physical disabilities and those who may be sensory impaired, with a total of four primary crossing points on Leith Street, a new signalised junction at Calton Road and tactile paving at each crossing point.

The pedestrian crossing at Waterloo Place has also been significantly improved with a larger footway provision and wider crossing.

And secondly for cyclists :

A dedicated two-way cycle way has been created between Calton Road and Picardy Place, which will continue to be extended as part of upcoming improvement works at Picardy Place, eventually joining up with the existing infrastructure already in place on Leith Walk. Cyclists can also make a left turn at the top of Leith Street on to Waterloo Place.

And finally for vehicles :

The existing carriageway along Leith Street has been resurfaced and in many instances has been fully reconstructed, creating a safer and smoother environment for road traffic. Traffic will not be able to turn right from Calton Road northbound on to Leith Street, right from Leith Street on to Calton Road or left from Leith Street on to Waterloo Place.  Calton Road will reopen and the diversion route on George Street will return to its original operation on the 28th July, whilst the diversion route at Easter Road/Montrose Terrace/London Road will be removed after the August festival period, in early September.

Commenting on the works programme, Martin Perry, Director of Development, Edinburgh St James, said: “We would like to thank the public for their patience during the main phase of construction work along Leith Street and we are delighted to now be reopening the street to traffic on the 28th July as planned. The closure period has enabled us to deliver a high quality and much-improved environment, which will better serve Edinburgh’s pedestrians, cyclists and public transport for years to come.”

Approved by the City of Edinburgh Council’s Transport and Environment Committee in March 2017, the Leith Street works programme has also been supported by the Council’s City Wide Traffic Management Group, which includes representatives from the Council, local transport providers and emergency services.

Councillor Lesley Macinnes, Transport Convener for the City of Edinburgh Council, said: “The reopening of Leith Street marks the culmination of the first phase of public realm improvements being delivered in conjunction with the Edinburgh St James project. With wider pavements and better cycling provision, the works have created a much more accessible and people-friendly thoroughfare.

“Temporary traffic management will remain in place to allow construction of the new Picardy Place road layout to continue. I would like to thank the public for their continued patience and cooperation while these works are carried out.” We asked cycle campaigners SPOKES what they think of the new road layout here. They responded :

“Spokes and others have for years been fighting for a permanent cycleroute here – even if it is just an uphill one initially. E.g. here from 3 years ago and here more recently.

“We have failed, other than the temporary cycleroute for the last 10 months during the St James roadworks. There is still one hope, namely the City Transformation, about which we should know more later this year, so it is important to keep the issue prominent.

“The temporary cycleroute has proved really popular and appreciated, albeit with occasional problems, and people are really going to miss it after July 28.

In response to the council advising of the reopening SPOKES took to Twitter to explain further :

A spokesperson told us : “This is a major cycling artery between Leith and south and Central Edinburgh.  Most officers and councillors realise that having a segregated cycleroute all the way up from Leith then ending at Calton Road rather than the top of Waterloo St is far from ideal, but they have taken the decision that prioritising motor traffic is more important.

“They reckon that having one uphill traffic lane instead of two (to allow a segregated cycle lane and wider footway) would result in bus congestion and queues.  We suspect (though without any definite evidence) that part of the problem is that the developer is insisting on motor access from all directions to their planned huge car park, which will have an access on Leith St.

“We have proposed everything from bold alternatives such as keeping Leith St traffic free (apart from buses) through to interim minimal measures such as just an uphill advisory cycle lane, but none have been agreed.

“One remaining big hope is the City Transformation.  If this is really bold and includes serious measures to reduce city centre private traffic then hopefully the Council can re-think the position here.  We should know later this year!   Of course, Princes St and North Bridge are far from ideal for cycling too (which is where Leith St takes you) so again a great deal depends on the Transformation Project.”

The ‘everyday’ walking charity Living Streets has expressed concerns about the Greenside Row crossing arrangements where the cycleway stops and there is an area of shared pavement. SPOKES explained that they share those concerns : “The aim is that Southbound cyclists leave the cycleway here – via an awkward exit onto the carriageway (the kerbstones are badly aligned).

“Spokes had pushed for separate parallel crossings for pedestrians and cyclists or at least painted markings. We have also asked for signage to indicate where cyclists should exit if headed for the Bridges and that only Calton Rd cyclist should proceed across Greenside Row.

“Both organisations are concerned re the very narrow pinchpoint just before the widenend Waterloo Place crossing.”
Although SPOKES say that they have been listened to and that some tweaks which they suggested have been included, the difficulty is the design did not include cycling from the beginning, and really only put it in as an afterthought.