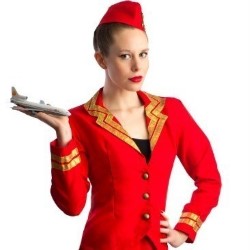 After taking home the Best Comedy Award at the 2017 Brighton Fringe, critically acclaimed comedy actress and character comedian Alice Marshall is back with a brand new hour.

The Strike features more of her signature weird and wonderful characters, only this time they’re transporting you all the way to the fifth dimension. Join bold and brassy Hispanic air stewardess Maria as she welcomes the audience on-board for their 60-minute non-stop flight straight to the Twilight Zone.

We’ll travel back to the 1930’s to meet Eddie Cornell, the most eccentric movie mogul ever to come out of the golden age of Hollywood. Eddie’s got a brand new picture in the works, only this time you’re the star!  And what if Russia had won the Cold War? Cue the most bizarre travel guide in history who’ll take us on a whistle stop tour of what the world would look like if bears were perfect drinking buddies and wedding dresses were made of balloons. Try not to buy any bread though…

Alice Marshall is a comic actress and character comedian, as featured on Comedy Central UK, BBC at The Edinburgh Festivals, BBC Radio 4 and BBC Radio 4 Extra. Named as one of The Independent’s top female comedians of 2017, she was a 2018 Funny Women regional finalist, and was shortlisted for the 2015 BBC New Comedy Award. In The Strike, Alice combines her own brand of storytelling, physical comedy and stand-up to bring you a riotous hour of character comedy that’s silly, sexy and smart in equal measure.

Just The Tonic @ The Caves