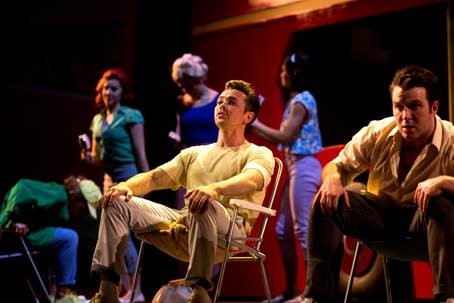 Last week I attended Titanic the Musical which, by its very nature, was a sombre yet powerful production. This Tuesday I was at an all together more upbeat affair as Summer Holiday the Musical bounded into Edinburgh.

Those who have followed Cliff Richard over the decades will know the musical is based on the film which was made in 1963 (was it really that long ago? I was a babe in arms then) It’s the story of four bus drivers, led by Don – played by former Brookside actor and X-Factor finalist Ray Quinn – who take a red double-decker London bus across Europe with the aim of getting to Athens.

They pick up a group of girl pop singers on the way as well as a young American girl who has temporarily escaped the clutches of her overbearing mother – played with some style by Sophie Matthew – and put-upon father played by Bobby Crush. Those in the audience who remembered the film will doubtless also recall Crush as a brilliant young pianist winning Opportunity Knocks, the tv talent show of the 1970s at a time when Simon Cowell was in still school trousers.

Summer Holiday is a story of dreams, love and hope.

And that is about the sum of the plot, such as it was but most of the audience weren’t there for a tear-jerking story – they were there for a couple of hours nostalgic escapism, of more innocent times and they got this aplenty.

The songs which helped make the film a hit in 1963 – Bachelor Boy, A Swinging Affair and, naturally, Summer Holiday were performed with gusto and the addition of Cliff Richard numbers Living Doll and The Young Ones was a nice touch.

The boundless enthusiasm from the cast scarcely lets up with some of the dance routines as impressive as they are energetic – particularly the Alpine skiing routine at the beginning of the second act with the dancers whizzing across the stage wearing shoes with wheels which was particularly clever.

As you might expect the stage was dominated by a big red London bus and it says much for the production that it was difficult to take your eyes off it.

Summer Holiday is very much of its time and I wonder what today’s teenagers thought of it. I suspect some might have thought it a tad too cheesy but more than half a century ago this was the sort of thing that entertained the masses.

That said, the musical is well produced with the cast performing with a passion that rubs off on the audience. They clearly enjoy what they’re doing, and I got the feeling they didn’t want to come off the stage at the end. The standing ovation they received from the Edinburgh audience told its own story.

All-in-all, Summer Holiday – the Musical is a breezy, well-produced show dripping in nostalgia.

Summer Holiday – the Musical is on at the Edinburgh Playhouse until Saturday 23rd June 2018. Tickets here.