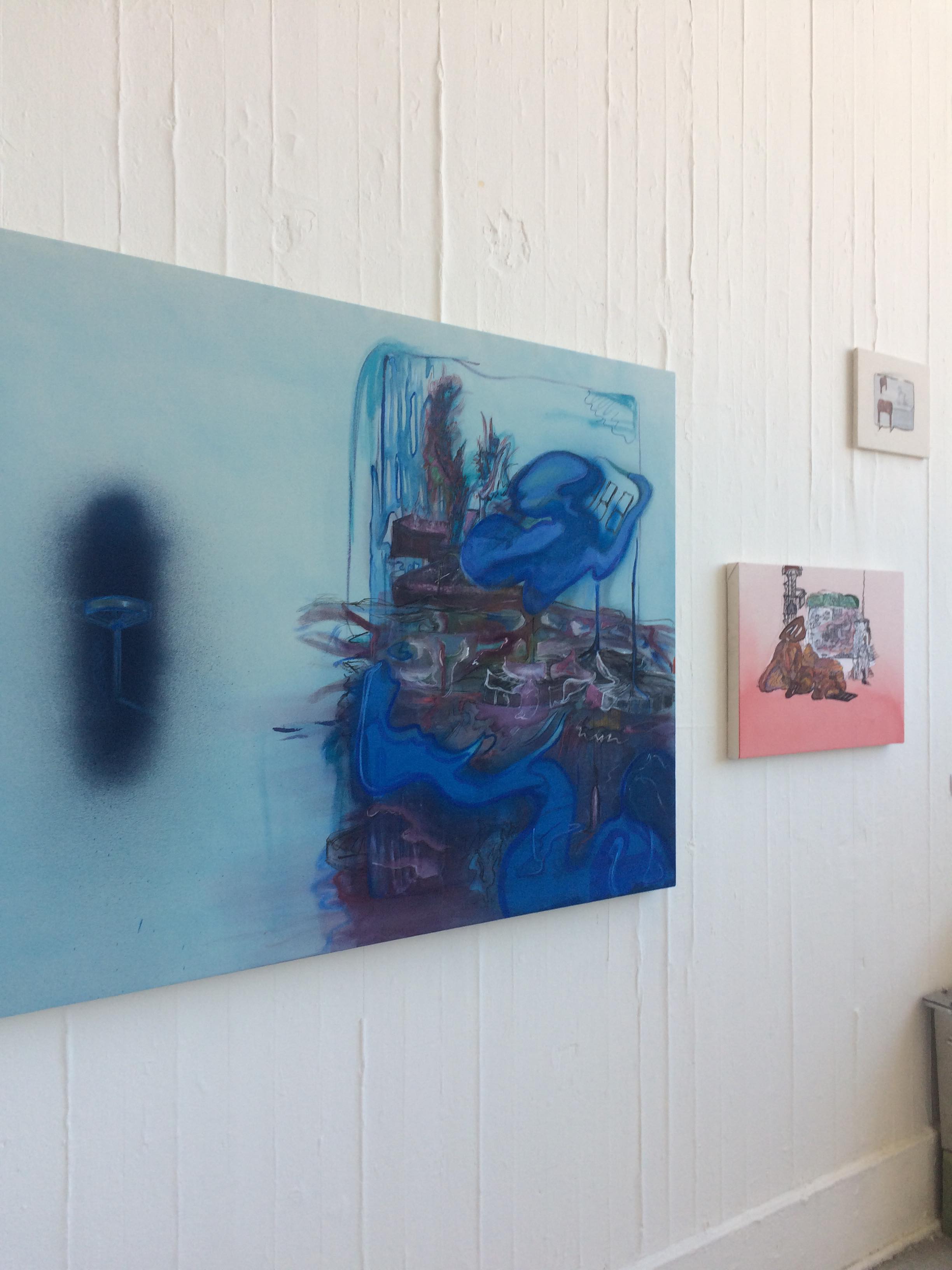 Enquiring beyond and working with others are important skills for every artist to learn and at this year’s Edinburgh College of Art degree show, these skills thrive.  Battling against the idea of an artist as a singular great ‘genius’, this year’s graduates are not only proud of their partnerships, but also the dedicated research behind the work

It was fantastic to see one such collaboration, ‘Just Guts’, presenting an installation where events were offered for others to learn more and even create alongside the artists. Together, the group has created an inside pavilion, like a grown-up interior tree house, inside the art school.

It featured paintings, prints, as well as homemade furniture (the silver rat display tree was my favourite), and a fireplace with handcrafted tiles. The work remains author-less, as it is unclear which piece is from which member of the ‘Just Guts’ group, of which members include; Ursula Ilett, Szabolcs Fricska, Fiona Berry, Harry Whitelock, Niklas Gustafson, and Tiki Muir.

I was left wandering round the room, trying to find the particular name of the artist who created the wonderful cat prints cascading off the table, or the curious bench made to look like a wretched, but happy, old man.  It seemed like a deliberate rebellion to the white walls and artists’ plaques of traditional galleries, and it led me to seek out more.

Collaboration with forces outside the art school can be seen in Emily Dunlop’s screaming plant sculptures.  Through an intriguing technological process, Dunlop has developed plants that when touched or hurt release stock audio screams and shouts.  The reactions added to the work with viewers scared to touch the organisms we might otherwise not think about, or some viewers happy to play with the plants like a screaming piano.

Opposite this work was a stage left empty, when I visited the exhibition, but interestingly seemed to offer the chance for musical partnership.

Jasmine Brown-Rase examines space with her tranquil pair of sculptures.  A floor plan shape of terracotta sits on the floor, with ripples and cracks like a low mountainous landscape.  The measurements match the domestic room Brown-Rase lived in while in London.  Alongside this, there is a bookshelf with books subtlety coated in sugar, referencing the Jamaican trade, spreading the geographical origins of her work even further.  Together the objects are bulky and take up the room and dense matter, but the delicate, personal mark is flawless.

The gentle touches of consideration and care continue in paintings in the painting work.  The sense of carefully intended mark making can also be seen in the work of Karen Ruth Maxted.  Wild, plant-like shapes are placed around her images with a sense of honest imagination, something increasingly absent in a cynical painting world.  Instead of complete pessimism, the painting graduates this year seems unafraid of humour, or of poking at the ancient art which traditional oil paint can represent.

Next door, Chloe Hamill uses photography to laugh at the assumptions made of her generation. #MillennialProblems is a series of elegant photos where Hamill plays with the stereotypes of avocado obsessed and safety bubble wrapped millennials. Laura Dow presents a more cryptic photographic exploration.  A series of enigmatic photos are dotted around the wall with a connective thread of precious birds and those obsessed with them.

In another room, a collage of pop culture references and animated objects blend together like a festival. Opposite Keelin Robinson’s flowing shapes of found materials and rugged colours sits Molly Lambert’s installation.  I was drawn to the rotating plant with the felt rose placed in front, eerily like the one seen in Disney’s Beauty and the Beast.  Other objects like wire shapes with felt mouse points and a painted skateboard sat along the alter with a smiling balloon guarding them like prized artefacts of a confusing age.  The final artist in this room, Caroline Squid, presented simple graphic drawings of faceless soldiers fighting against spewing egg yolks.

A critique of the art market as it is currently, and not the wonderful festival tree house atmosphere these graduates may create, is introduced by Ladina Clément.  By criticising the nuanced market, she attempts to allow others in on what often feels like an elaborate joke.  You can walk into her installation, an unmanned dealer’s stall at an art fair, and observe plaster casts of empty, useless business cards, and use a gallery map which will lead anybody unimportant, outside the imaginary fair.  Behind the stall lies a model dressed as the art dealer themselves, placed head first into the ground, driven mad by his own business.

One of the rare artists to take the entire control of a single room is Jack Handscombe.   A collection of poetic objects and sculptures litter the ground, but with specs of sand spreading to nearly all of them.  After entering, the viewer can see two traditional spires or towers made from sand.  Next to them lies a small sample of the detailed sand work which viewers are invited to touch and examine themselves.   Upon the same sand pile of the spires is motorcycle helmet, which on closer inspection, is altered with a clamshell shape welded to the front.

There is also a delicate flower placed on one of the spires.  They’re small examples of the classical hints and ideas which are further explored in the room.  An archway blockade taken from the Royal Mile can act as a frame for a mannequin dressed as a motorcyclist.  They are caught in a crawling position with an overgrown plant placed on its back.  The covered face peers into a pottery vase, with a metal bird placed within.  I was later informed this sculpture originally had the mannequin peering into a laptop, but that possibly valuable part has since disappeared.  The replacement is more than enough to continue to suggest a dangerous dependency.

Next to Handscombe’s sculptures was a set of documents for reading.  They laid out the ideas and concepts behind the work in a surprisingly unpretentious way.  Other artists this year also opened up their research for others to see.  Instead of just sketchbooks, visitors could see peruse detailed concepts and history behind their projects.

With research at the forefront, this degree show has produced sincere artwork, and collaboration leading to work outside of the traditional market.

If you would like to find out more click here. The degree show sadly closes this Sunday so I encourage you to have a good look this weekend.  There is also a great deal of exciting work from the design departments which is well worth a look.