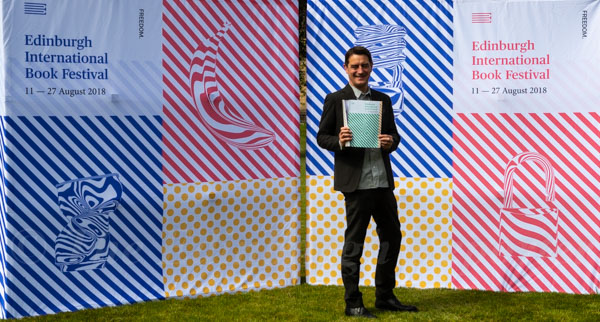 Freedom: ‘the power or right to act, speak, or think as one wants.’

We all agree with that – don’t we?  But how do our actions or words affect others? Some people think they have the right to play loud music all night, some think they have the right to carry a gun. In April an autistic woman, Tamsin Parker, was forcibly removed from a cinema because the noises she made upset others – whose rights should have come first? We may think everyone has the right to march for what they believe – but what if that belief involves hatred of another religion, race or gender?

Recent Book Festivals have tended to focus on discussion and debate, but this year, said Director Nick Barley, things seem different. Every time he and his team met to discuss their plans for EIBF 2018, what they felt above all was powerless. World leaders intent on doing whatever they liked, human rights abuses continuing unabated, politics moving in ways that few could have envisaged.

‘We kept coming back to one word: freedom.’

It was inevitable, then, that Freedom and Equality should become one of the leading themes of this year’s festival – and although there are many other strands, from Mind and Body to Sport and Society and Politics for Change, the concept of freedom – or freedoms – runs like a river through all of them.

In a programme packed with thought-provoking discussions, readings, performances and interactive events, EIBF 2018 invites us to look at everything from Freedom from Poverty – in which Stewart Lansley and a panel discuss Universal Basic Income – to Freedom Debate: Education, a discussion with Vivian French, Brian Conaghan and John Naples-Campbell on what kind of education young people need to thrive in a complex world.

The Freedom Debates, of which these two events form part, will be published as The Freedom Papers, a supplement to the new edition of Gutter, which will be launched at EIBF. They will also be celebrated in The Freedom Finale, a closing concert on 27 August, when musicians, writers and artists will lead an international celebration. Every year EIBF brings more and more writers to Edinburgh from foreign climes. In 2017 Iranian artist and this year’s EIBF Illustrator in Residence, Ehsan Abdollahi had a lot of trouble with freedom – he almost didn’t get here at all when he was initially refused an exit visa. Now he’s back as one of the festival’s Guest Selectors, and he’s put together a series on visual storytelling, discussing Thinker: My Puppy Poet and Me with its author Eloise Greenfield, and offering everyone the freedom to take part in The Big Draw, a collage creating the perfect pet. Other authors hail from countries as diverse as Uzbekistan, Oman, Canada, Brazil, Iceland, South Africa, Equatorial Guinea and the USA.

Freedoms of another kind are examined in Revolting Women, a theme explored by Glasgow Women’s Library’s Adele Patrick. And although suffragettes do of course feature large, it’s certainly not all about them. Chitra Nagarajan and Olumide Popoola discuss feminism and intersectionality in contemporary African communities and countries, Clare Forrest, Fiona Gordon and Kate Livingston guide 8-12 year olds through their A-Z of undercelebrated female scientists who changed the world (The A to Z of Empowerment), and Jenny Landreth shines a light (or should it be a shower head…) on the women who took to the water to win the right to go swimming – yes swimming. In the 1920s we weren’t even allowed to do that. Adele’s also managed to drum up the Herland Salon, whose special pay-what-you-can event on 21 August combines music, live DJ-ing and stories. And if music is your thing, EIBF can offer you plenty of that, from the nightly Unbound in the Spiegeltent with its free literary cabaret, to Suede’s frontman Brett Anderson on Brit Pop, and Iron Maiden’s Bruce Dickinson’s memoir What Does this Button Do? to Ed Vulliamy asking – through a series of interviews with those at the frontier of music and politics – if music has the power to stop war.

The Last Poets (‘the godfathers of hip hop’) are back after their sell-out session last year, performing tracks from Understand What Black Is, and in Grime Time DJ Target talks about the genre that launched #Grime4Corbyn. If you’re looking for something a little bit more traditional, try An Opera for Humanity. Edinburgh’s own Alexander McCall Smith discusses books, music and opera, the ways they influence one another and his love for each form. Music, art, performance – they’re all here – but in the end it all started with the books. Sometimes you just want a ‘good read’, and EIBF has plenty of those.

In a moving speech to launch the 2018 festival, Chair of the Board of Trustees, Alan Little, talked about the moment that books entered his life. It was spring 1966; he was six years old. Opposite his terraced house, the mobile library pulled up. He said :

‘I remember every detail, the bright colours of the children’s section…..voices that could speak to me and hold me and fill me with a sense of wonder.’

Years later, Alan read Seamus Heaney to his wife as she lay severely injured in a hospital bed. Years later still, in their kitchen, his wife read Jackie Kay to him.

He explained : ‘(the poem’s) beauty immobilised me…I am glad I’m as susceptible to the charms of the written word as that six year-old boy was.’ Come to the Edinburgh International Book Festival. Be challenged, be entertained, and most of all, be charmed.

The full programme is available at www.edbookfest.co.uk Paper copies are widely available at libraries, bookshops, cafes, galleries and many other venues throughout the city and beyond. You can also order a postal copy by calling 0131 718 5666, and programmes are available in large print, braille, audio CD and MP3 format on request.

Bookings open on 26 June at 8.30am and may be made online, by phone or in person.